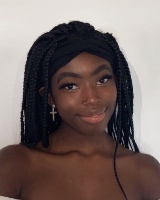 Nicole Collins grew up in Birmingham, England - one of the roughest cities in England. Saying that it isn't for the faint of heart is an understatement. Despite her unfortunate surroundings, Nicole craftily navigated her way through her adolescence. She secured herself a place at the highly sought-after performing arts school, Birmingham Ormiston Academy where she trained in Musical Theatre. After years in her hometown, Nicole made the move to London, where she studied English with Film Studies at Kings College London.

To fuel her interest in writing, Nicole became a writer for the Urban Journal, a start-up online magazine which frequently discusses black-centric issues in popular culture. Nicole also created her personal blog, The N Word to discuss her own interests and socio-political opinions.