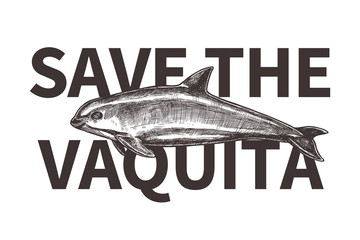 In Spanish, vaquita means “little cow” and this is an accurate name for the smallest living cetacean. Cetaceans include all marine mammals that include whales, porpoises, and dolphins. However, the vaquita is the most endangered marine mammal in the world, with WorldWildlife.org claiming that there are only ten individuals of the species left, whereas other sources say there are around 100 of them. Whatever the actual number is, there is a universal agreement that these animals are in serious need of saving.

The “little cow” has a limited habitat range. These mammals can be seen in the northern portion of Mexico’s Gulf of California. This relatively tiny cetacean has black rings around its eyes and a round head. They have a very large dorsal fin, the largest of any porpoise relative to its size. They do not find themselves swimming too deep, as they prefer opaque coastal waters due to the high levels of nutrients found there. Benthic fish are their choice of delicacies in these murky waters.

According to Porpoise.org, the hunting of totoabas has led to the killing of vaquitas as well. Totoabas are large fish, and there is an extremely high demand for them in China as a source of traditional medicine, The most sought-after part of the totoaba is its swim bladder. It is made into a soup that soothes aches and pains brought on by pregnancy, even healing pains in the joints, but this is all speculation.

The gillnets from illegal fishing activities, specifically designed to catch a totoaba, fit a vaquita perfectly too. When they are caught in nets, they cannot reach the surface to breathe in oxygen and drown. These nets are very efficient in what they are designed to do. So efficient that they catch all other creatures large enough to be caught by the nets. The name for these additional unplanned prisoners is by-catch. This is the leading reason for the elimination of vaquitas.

This is unfortunately not the only reason why vaquitas are endangered. A website dedicated solely to spreading awareness of the vaquitas called The Vaquita says that vaquitas also face the destruction of their habitat. The coastline and other areas which the vaquita calls home are being used for developmental and infrastructural purposes and all of this always goes paired with pollution. This is the case we hear too often when it comes to animal endangerment.

There is not much information about vaquitas. They are timid creatures, unlike their very friendly relatives, the dolphins. Efforts to increase their population have proven to be much more difficult than other marine mammals because of their temperament. They become stressed easily when captured and everyone knows for a fact that unnecessary stress can have a damaging effect on the sufferer.

According to Andrea Crosta of Earth League International, the main way to conserve the vaquitas are to catch all offenders who poach totoabas and to implement severe punishments. The use of these gillnets should be prohibited. Illegal fishermen are destroying much more than they predict and it is harming our planet.

Stopping poachers is a difficult task. There are always loopholes and ways to divert the government’s attention away from criminal activity. Therefore, the community must take action. We have a lot more power than we realise. It is our job to correct our fellow humans’ errors and lapses in judgement, and it is also our responsibility to protect the animals of our planet by protecting one vaquita at a time.