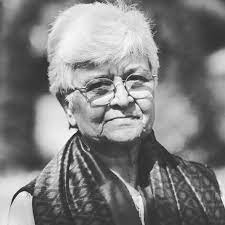 Few people stand up for what they believe in, and even fewer leave an indelible impression on our hearts. Kamla Bhasin was one of them.

Kamla Bhasin, a well-known feminist, activist, and social scientist died in Delhi on Saturday last week. I still can't believe she is no longer among us. Kamla Bhasin, one of the most courageous women, despite facing several personal challenges and catastrophes, never gave up hope. Throughout all of her misfortunes, she laughed, smiled, and sobbed but never put herself down.

Bhasin endured a tumultuous divorce, a battle for a share of her home, the responsibility of caring for her disabled son, and the most painful and heartbreaking of all, the loss of her younger daughter. She would have collapsed if she had been a weaker lady but through it all, Kamla fought for others instead and in the smiles of others, she found her happiness.

Bhasin was born in Punjab's Shahidanwali village (now in Pakistan) in 1946, a year before the Partition, and was the oldest in a family of five children. She received a fellowship to study Sociology of Development at Muenster University in West Germany after completing her MA at Rajasthan University. She taught for approximately a year at the Orientation Centre of the German Foundation for Developing Countries in Bad Honnef after finishing it in the mid-1970s.

Before being assigned to New Delhi, she worked at the UN Food and Agriculture Organization and provided gender training for women from South Asia in Thailand. She worked for the United Nations until 2002. Sangat was created by her in 1998 and she published scores of books, performed songs on femininity, and led many women's movements throughout her career.

‘Tod tod ke bandhanon ko dekho behne aati hai...aayengi zulm mitayengi... yeh to naya zamaana laayengi' — she says, urging women to overcome all constraints and establish a new world while energizing the feminist movement in the region in the 1970s and inspiring a generation of women.

In a recent Ted Talk, she claimed the Coronavirus has magnified so many other social and economic diseases that the strong have developed and continue to feed and propagate to dominate the globe. Patriarchy is the first such infection, which continues to disrupt the lives of billions of women, men, and transgender people. The infection of toxic masculinity is linked to this. Add to it viruses specific to South Asia, such as "caste, race, religious fanaticism, and the most lethal virus of avarice, which has resulted in what many refer to as catastrophe capitalism."

Bhasin wrote extensively on gender problems, emphasizing that feminism is a battle between two ideas, not a war between men and women. She was well known for her work with the South Asian feminist network Sangat, which has taught thousands of women about gender problems. She battled for equal rights for almost four decades.

‘Understanding Gender’ and ‘What is Patriarchy’ are two of Bhasin's works about the feminist movement. Her works have been translated into more than a dozen different languages. She is also credited for introducing the "Azadi" cry to India, which was purportedly originally used by Pakistani feminists in 1984 to oppose the Zia-ul-Haq government.

She referred to herself as a member of the "Midnight's Children generation," and explained how Shahindanwali became Pakistan and her family became Indian a year after she was born. “My birthplace and the homeland of our forefathers became not only foreign but hostile territory”. She was cited as stating, "I have spent my whole adult life dreaming of, and fighting for, peace and cooperation between the two countries I belong to."

Her art was likewise influenced and inspired by this.

Borders & Boundaries: Women in India's Partition was co-authored by her with author and publisher Ritu Menon. The book focuses only on the impact of India's partition on women as they attempted to put their lives back together. The two writers chronicled women's experiences throughout the Partition, resulting in a feminist rethinking of the Partition's history.

She was a woman who was quite forthright in her views, ideologies, and thoughts. She made it plain that feminism did not seek to push males to the outside of the movement, but rather to engage them actively and make them an integral part of it.

She taught us the necessity of collaborative action and shared responsibility for a more inclusive and just society, as well as the fact that feminism was not a gender-specific notion. She also taught us the importance of remaining calm and composed in our battle for a more equal social order. She instilled in us the skill of calmly listening to those whose views on feminism were opposed to our own and urged us to be courageous in pointing out the flaws in our nation.

Bhasin, who made time in her life for women and acknowledged the contributions of men who have furthered the cause of equality, and who embraced secularism as the life-breath of democracy, will undoubtedly be missed by India's people.

Her absence will truly be felt by all. This is an ode and a thank you to her for inspiring millions of young students and women like myself, for opening our eyes to the terrible truth that we continue to ignore despite its obvious, gloomy presence in front of us.

She represented and touched women seeking a foothold in public spaces that were previously closed to them, subsequently questioning the state and governments for their incapacity to implement an equal system. At numerous rallies in Delhi, she was a constant presence.

If time permitted, she would make an appearance at music performances on occasions. A songwriter whose songs have inspired people all across the world and have been sung across divides. A poet whose lyrics give ladies a jolt of adrenaline. To her core, she was a secularist as well as a true feminist.

If you want to call her a force of nature, go ahead. Kamla Bhasin was more than a pleasant, smiling face in her 75 years of life and she will be missed. Her demise last week, quiet, hard, and unyielding, put us in tears as well, for we had yet again lost a jewel. Kamla Bhasin has truly been an inspiration to us, enlightening, uplifting, and encouraging us throughout her life. Though she has left us, she will keep living in our hearts forever.