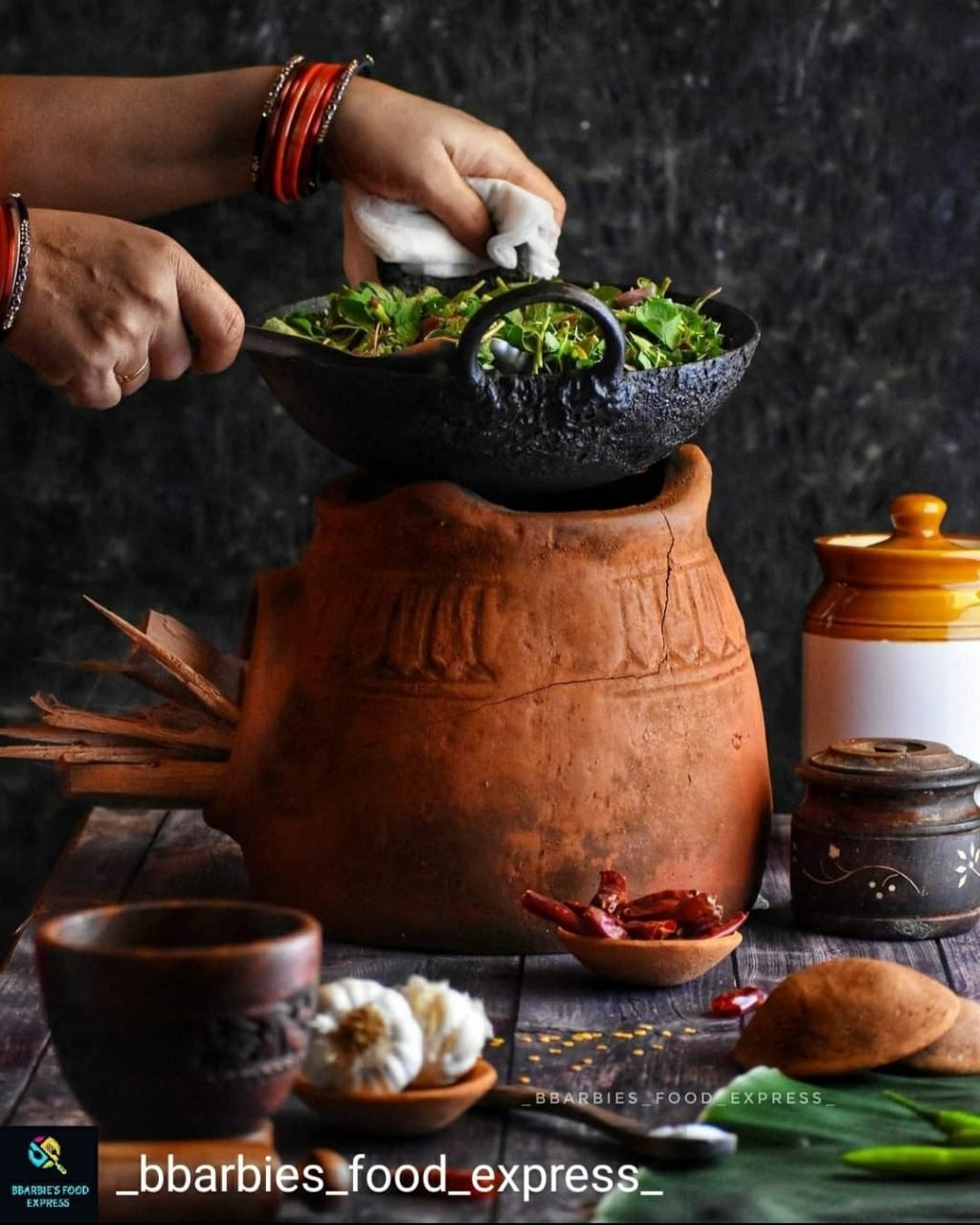 Odisha is said to be a land of rich culture and traditions. Since time immemorial this quiet state on the eastern coast of India has been a place that has accepted every religion, custom, art and architecture that arrived at its shores. The myriad communities of this divine land have peacefully mingled, thrived and amalgamated together throughout history. Scriptures mention that the region of Kalinga, the ancient name of Odisha was a flourishing land with a democratic society. Every group that came here settled in this pristine, blessed land contributing their ways of life into the society enriching the Odia lifestyle in the process. Be it the Buddhists, Jains, Hindus or the Mauryas, Gangas and Satavahanas to the more recent Mughals, Marathas or British, everyone has offered their unique heritage which was promptly accepted and mixed with pre-existing ones giving rise to a deeper and profound heritage.

Situated in the central region, at the confluence of the north and south, Odisha offers an exquisite mix of the best of both regions. It still holds on to the old world charm along with the inevitable modern progress in a beautiful and delicate balance. This is distinctly visible in the current cultural scene both in the tangible and intangible aspects including the culinary scene along the length and breadth of the state. Odia people are known to be big-time foodies since the beginning of written documented history. Testimony to this fact is the various myths surrounding this land from Indian history itself. One of the famous ones is related to Jagannath, the most famous identity of the land of Odisha.

It’s widely acknowledged that when Sri Adi Shankaracharya went around India establishing his four mutts on the four corners of India, he established Govardhan mutt of the east in Puri and had famously declared that the land is to be considered as the dining place of Lord Vishnu. This confirms that the people of Odisha attached great importance to the gastronomic traditions even in the ancient world to be given such prominence through it. Adi Shankara had called the food Mahaprasad and the tradition continues. 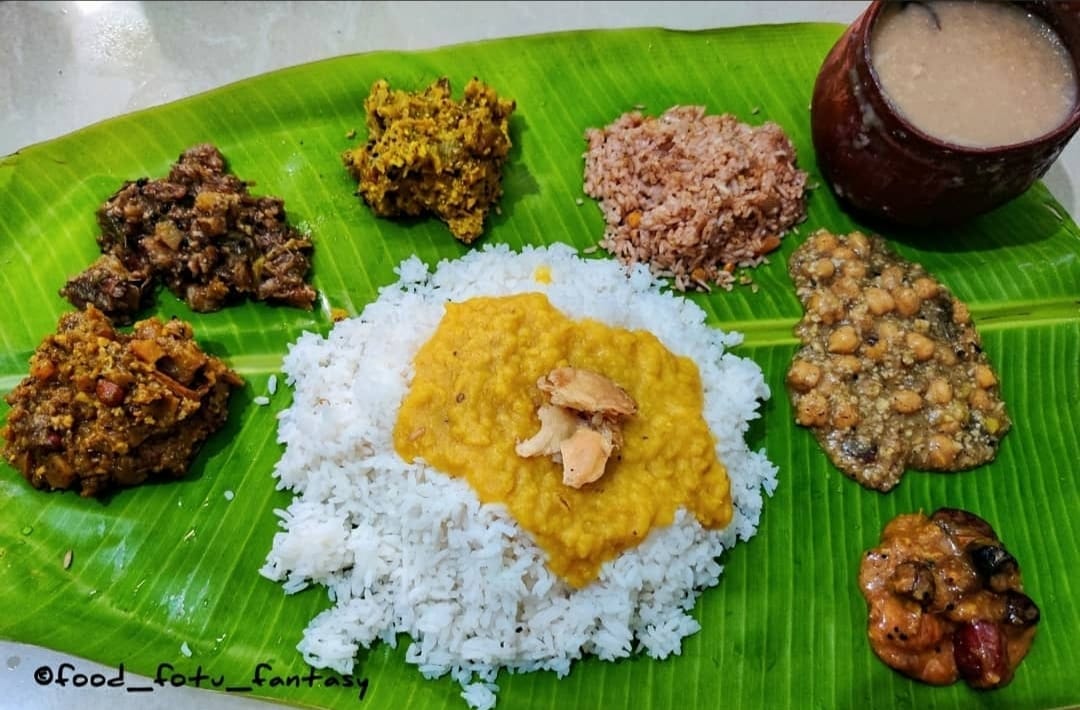 No discussion on the Odia food culture can be done without the mention of Mahaprasad, the divine food of the Gods. In the quaint coastal town of Puri resides the world-famous Lord Jagannath. The presiding deity of Odisha is a form of God Vishnu who is indulged daily with an elaborate system of food called Mahaprasad. It consists of 56 different meals throughout a day in different forms of dishes, be it a detailed platter of various rice preparations, dals and curries or an array of special sweets and desserts both in wet and dry forms. After being offered to the sibling deities, the food also known as Abhada is distributed among the devotees. So much importance is offered to food that the Srimandir has a distinct area dedicated to food offerings called Bhoga Mandap and for distribution called Ananda Bazaar.

Interestingly Mahaprasad also served as a form of repository of Odia cuisines and dishes from around the land of Odisha. The ancient techniques of food preparation are still preserved and diligently practised in the great kitchen of Srimandir, once touted as the largest kitchen in India. It still prepares and serves food for comfortably a hundred thousand people daily. Needless to say, this custom of attaching great importance to food persists throughout the state. The deities in Odisha are as fond of food as the Odia people. Thus one can find a culture of temple food in almost every temple in every place of Odisha. Be it a Vaishnav, Shaiva or Shakta temple, food is an important aspect of the daily ritual.

With so much intermingling and acceptance of different arrivals across the history of the state, the cuisine is quite evolved. People have experimented and developed a variety of systems in cooking to excel in flavour, taste, aroma and texture. Odia people love food, treat themselves to food, celebrate with food and share their customs through food. Anyone who arrives in Odisha will be undoubtedly first and foremost hit by the ubiquitous availability of a plethora of food be it just an array of snacks or an elaborate meal.

Each region of Odisha prides itself with some of its exclusive food that acts as its regional identity. It is not quite possible to curate the enormity and depth of Odia cuisine in a single article. But let’s see 5 uniquely delectable dishes and desserts from the five geographical regions of Odisha which will make anyone wanting for more.

Northern Odisha food is quite aligned with the cooking techniques of Bengal and Assam. People here are fond of non-vegetarian food especially seafood. The dishes are savoury with an undertone of sweetness in them. 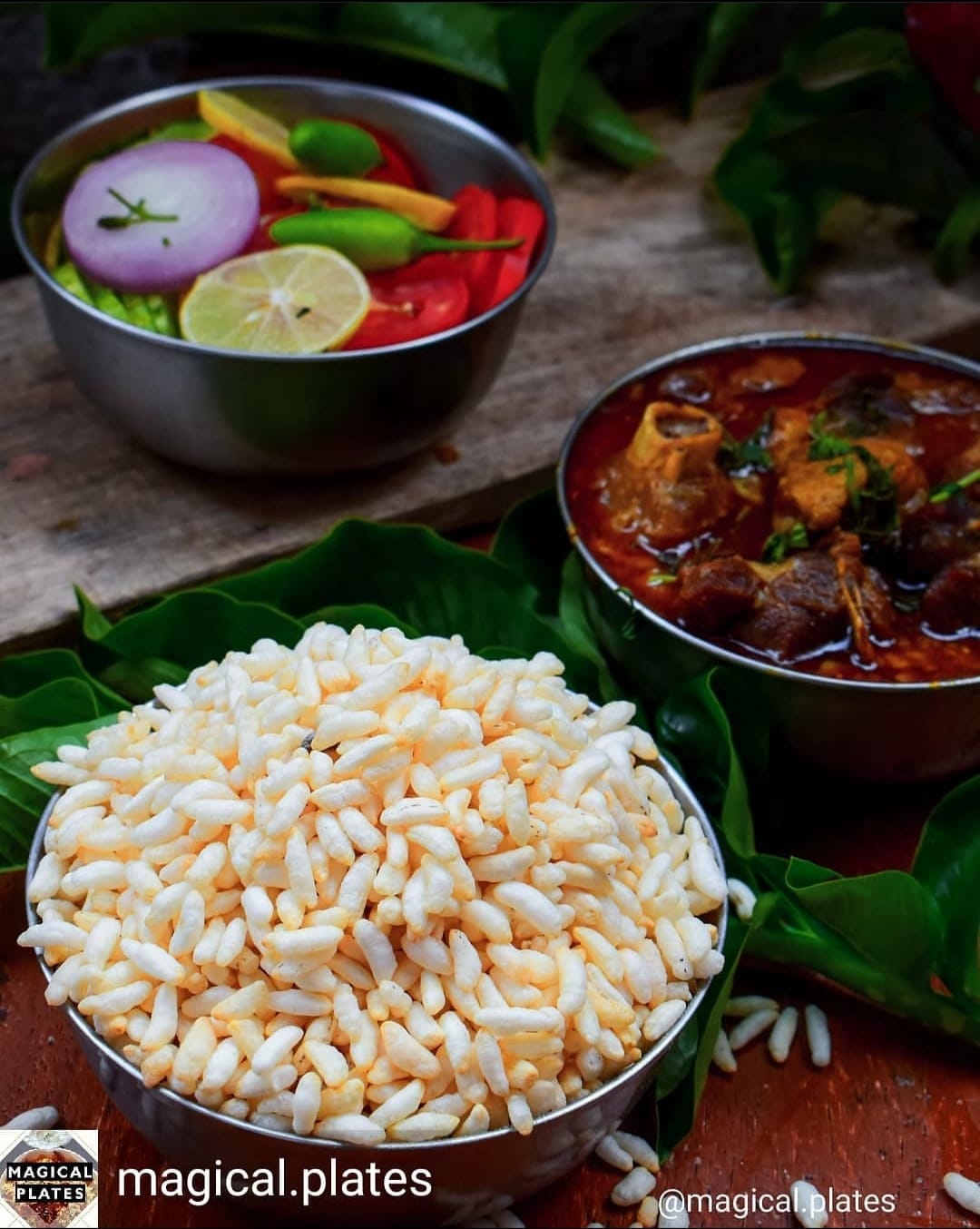 This is a unique dish from the Mayurbhanj district. Mudhi is puffed rice that is dry roasted in hot sand. It is popularly eaten with Mansa or spicy mutton curry with a very rich gravy. The combination of crispy mudhi with the mutton gravy is quite a treat. 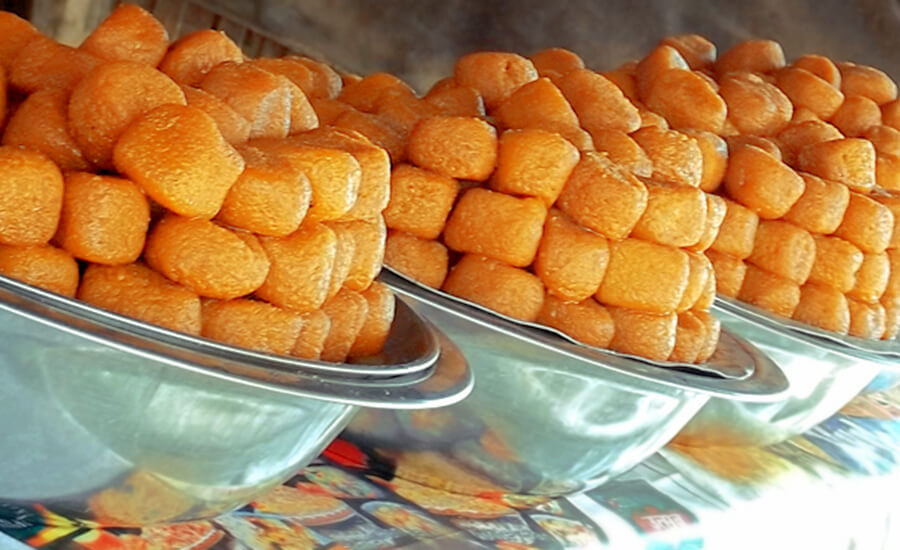 Chhena Gaja is a sweet meat from Balasore district. This is made out of fried cottage cheese dipped in hot sugar syrup. It is available both as a hot wet sweet or a dry sweet. As the moisture is completely drawn out, this sweet lasts quite along. People love to gift this for festive occasions as well as typically for marriage ceremonies.

Eastern Odisha food is one of the most traditional Odia foods. Influenced by the Jagannath culture, here the food is very much aligned to the temple food culture. The dishes are a beautiful balance of savoury and sweet and generally mix vegetable dishes are quite popular. 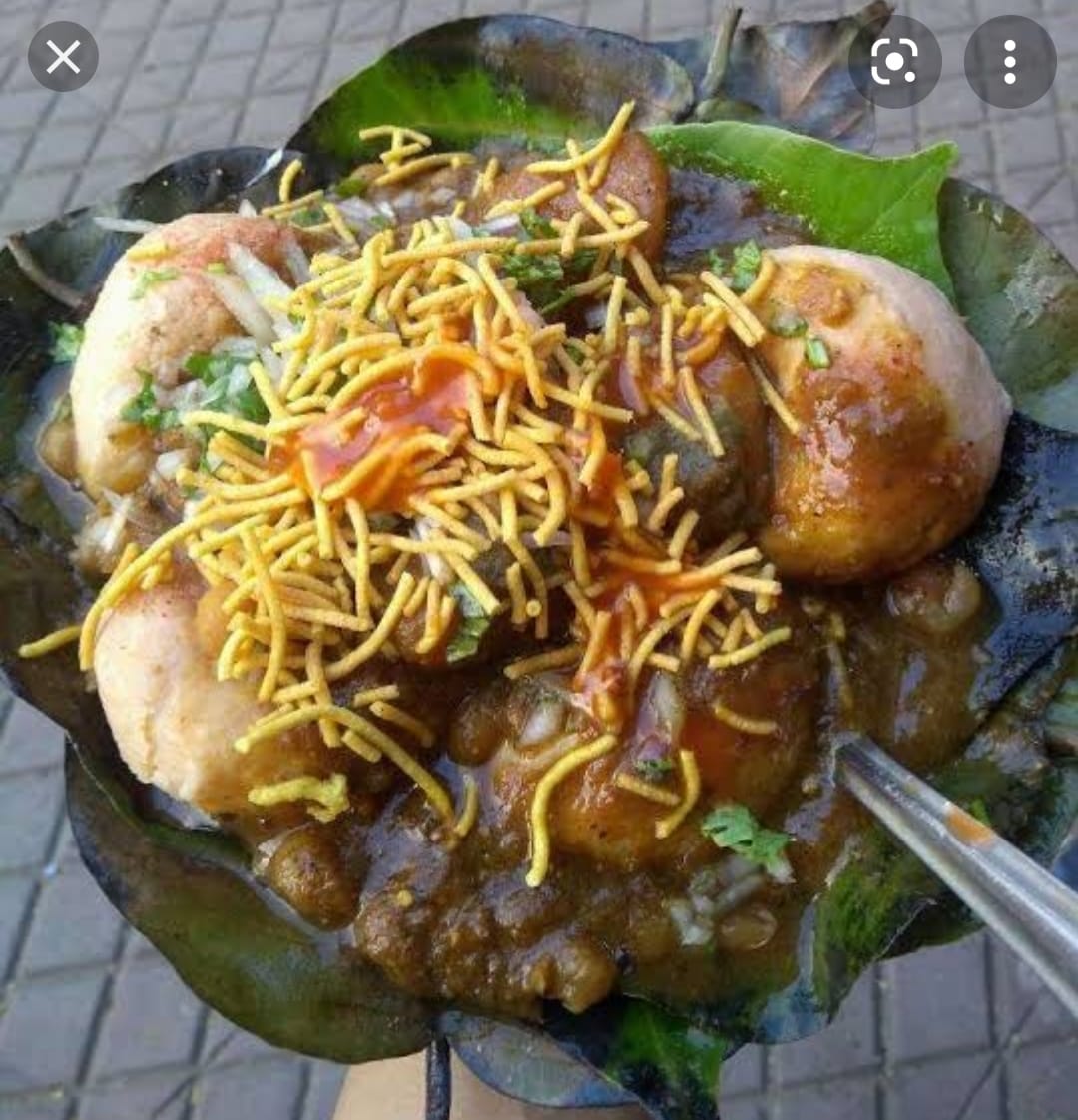 Dahibara aludum is a popular delicacy from the Cuttack district. It’s an elaborate dish with multiple components. As the name suggests the main two ingredients are Dahi bara or fried lentil dumplings soaked in yoghurt and aludum which is a spicy potato curry. The dish is served in a single bowl with multiple layers. The original dish had the two ingredients but with time it has evolved to include other layers such as a white pea curry called Ghuguni along with chopped onions, chillies, cilantro, sev and many other condiments like yoghurt, green chutney, tamarind juice etc. 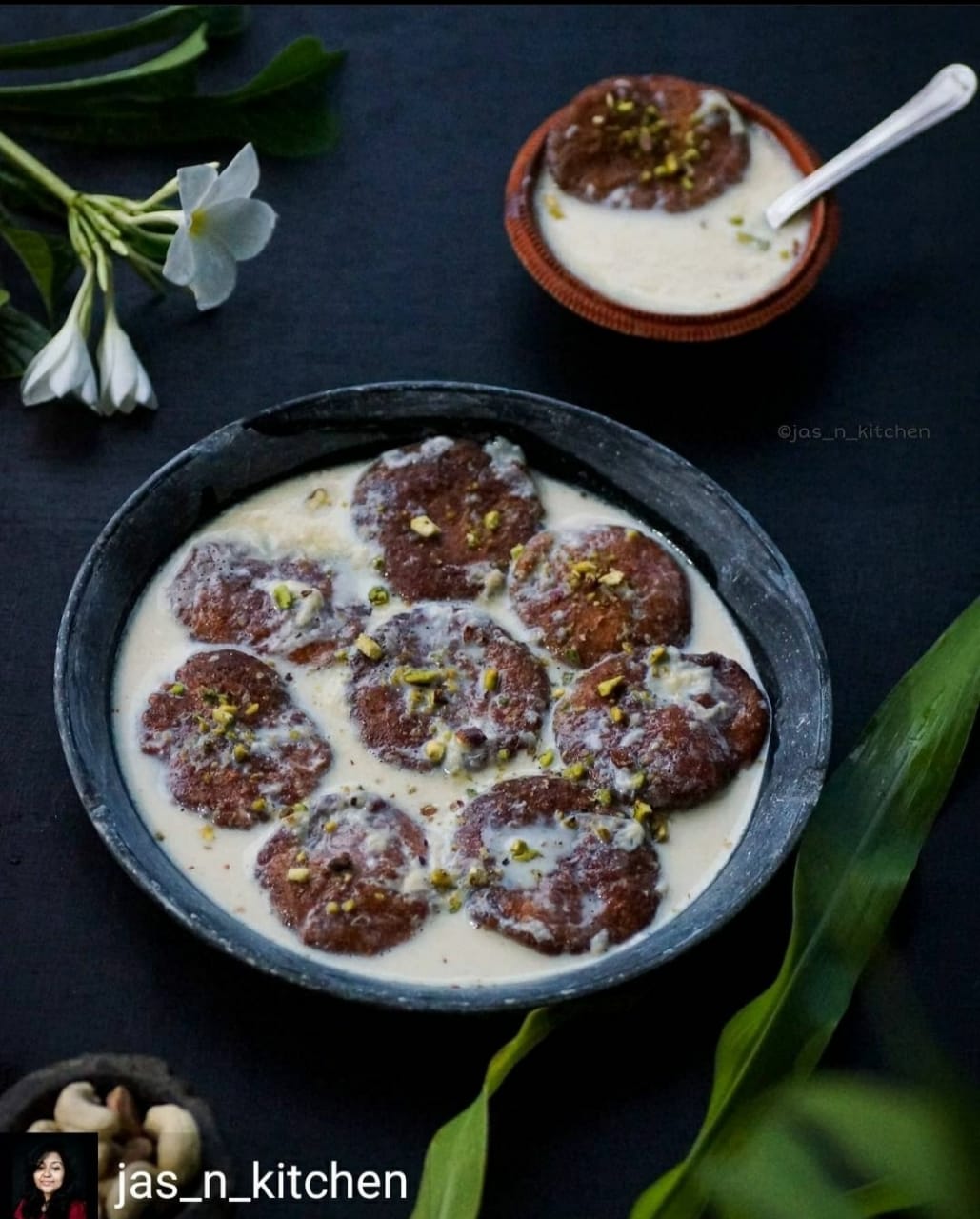 Rasabali is a sweet dish from the Kendrapada district. It is thought to have originated in the famous Baladevjew temple as an offering to Vishnu. It consists of deep-fried flattened reddish-brown patties of chhena or cottage cheese soaked in rabri or a thickened, cardamom flavoured sweetened milk.

Central Odisha food is more close to the central Indian food culture. It consists of a balanced mixture of north and south cuisines. The dishes from this region are savoury and hot. 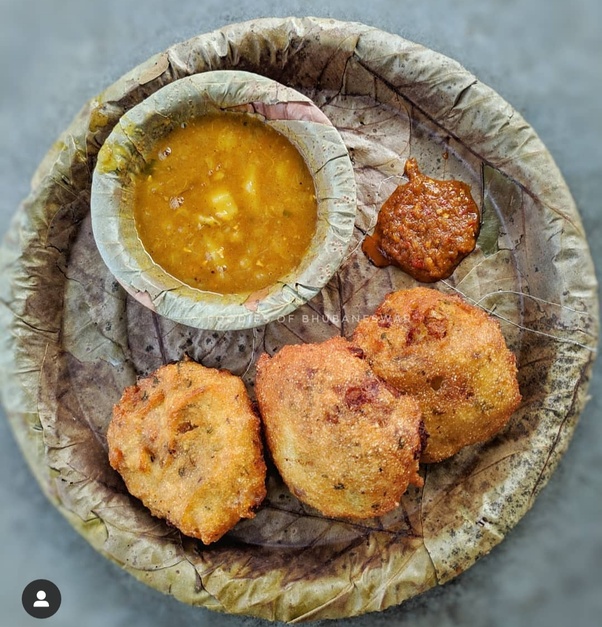 Bara Guguni is a dish from the Dhenkanal district. It has two components, the deep-fried flattened lentil dumplings or fritters which are packed with onions n chillies along with a hot white pea curry called Guguni. It is a snack that is usually served in the morning breakfast or evening. 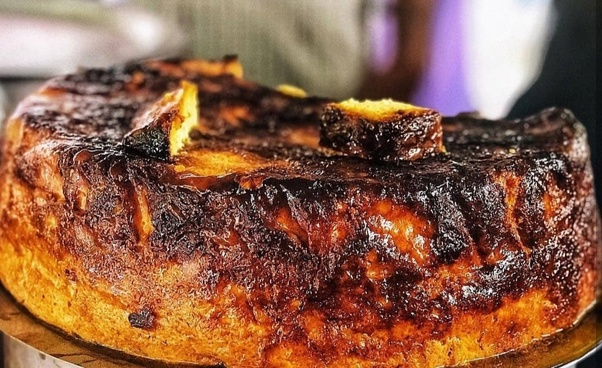 Chhena Poda is a famous sweet from the Nayagarh district. Probably the most well-known sweet from Odisha today, it is again made out of cottage cheese which is sweetened and slow-baked on fire. Interestingly this sweet was invented accidentally by a man called Bidyadhar Sahu in the early 20th century when he had unknowingly left some sweetened and seasoned cottage cheese overnight on an Indian chulha that was still warm from earlier use. The next morning, he found that the cheese was baked and the sugar caramelised to form a new exquisite tasting sweet dish.

Western Odisha food is predominantly influenced by the tribal culture of Odisha. The dishes are based on very rare techniques and very different from the rest of Odisha. The food tradition makes use of very unique and rare vegetables and ingredients too. Being a fertile rice cultivating belt, much importance is given to rice which is a boiled variety. 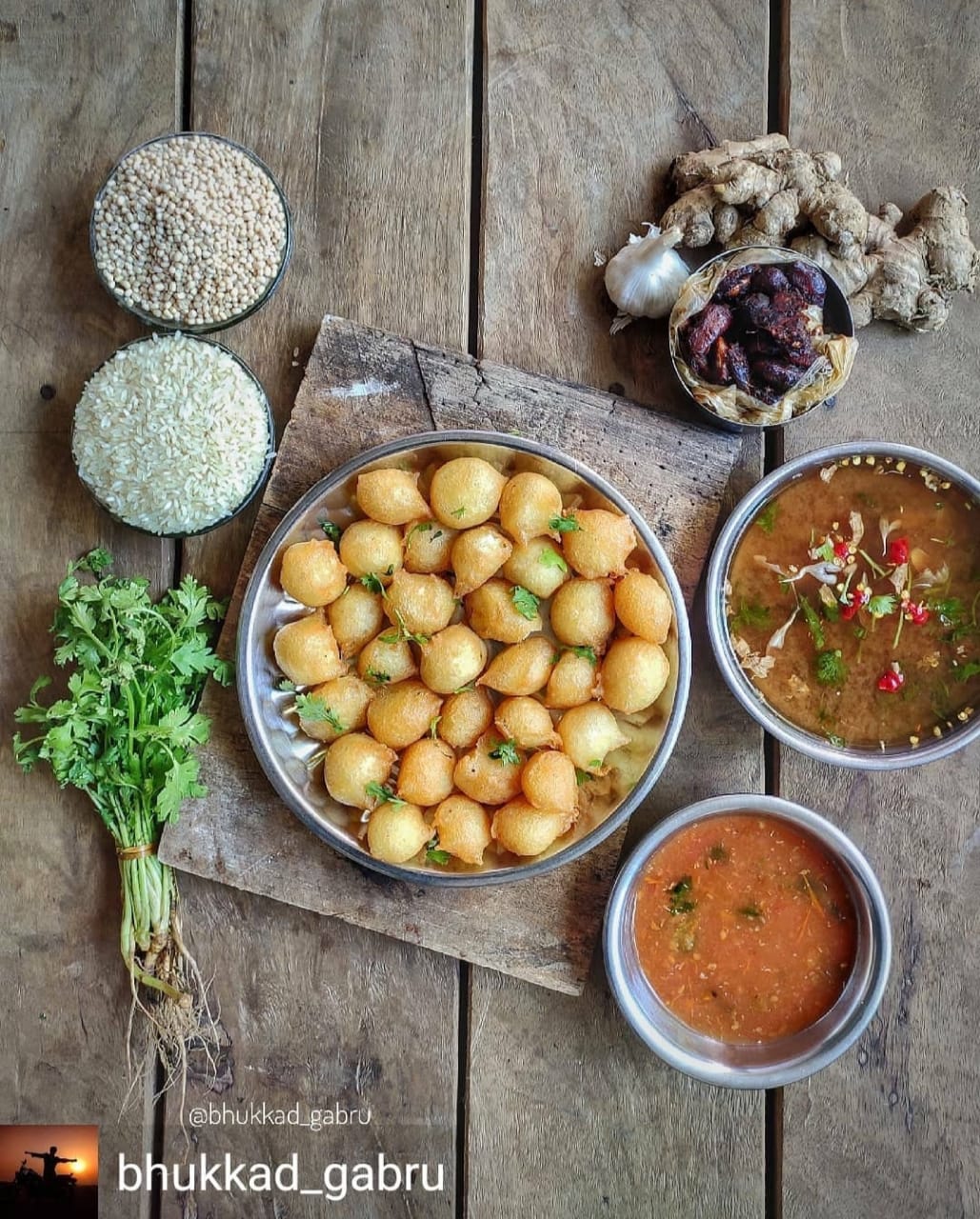 Chaul bara and Tetel jhol is a dish originating from the Bolangir district. This dish’s main ingredients are small ultra-crunchy deep-fried round rice dumplings which are served along with tetel jhol or a spicy tamarind gravy and a spicy garlic flavoured tomato chutney. It is a popular street-side snack as well as a snack usually made in all western Odisha kitchens. 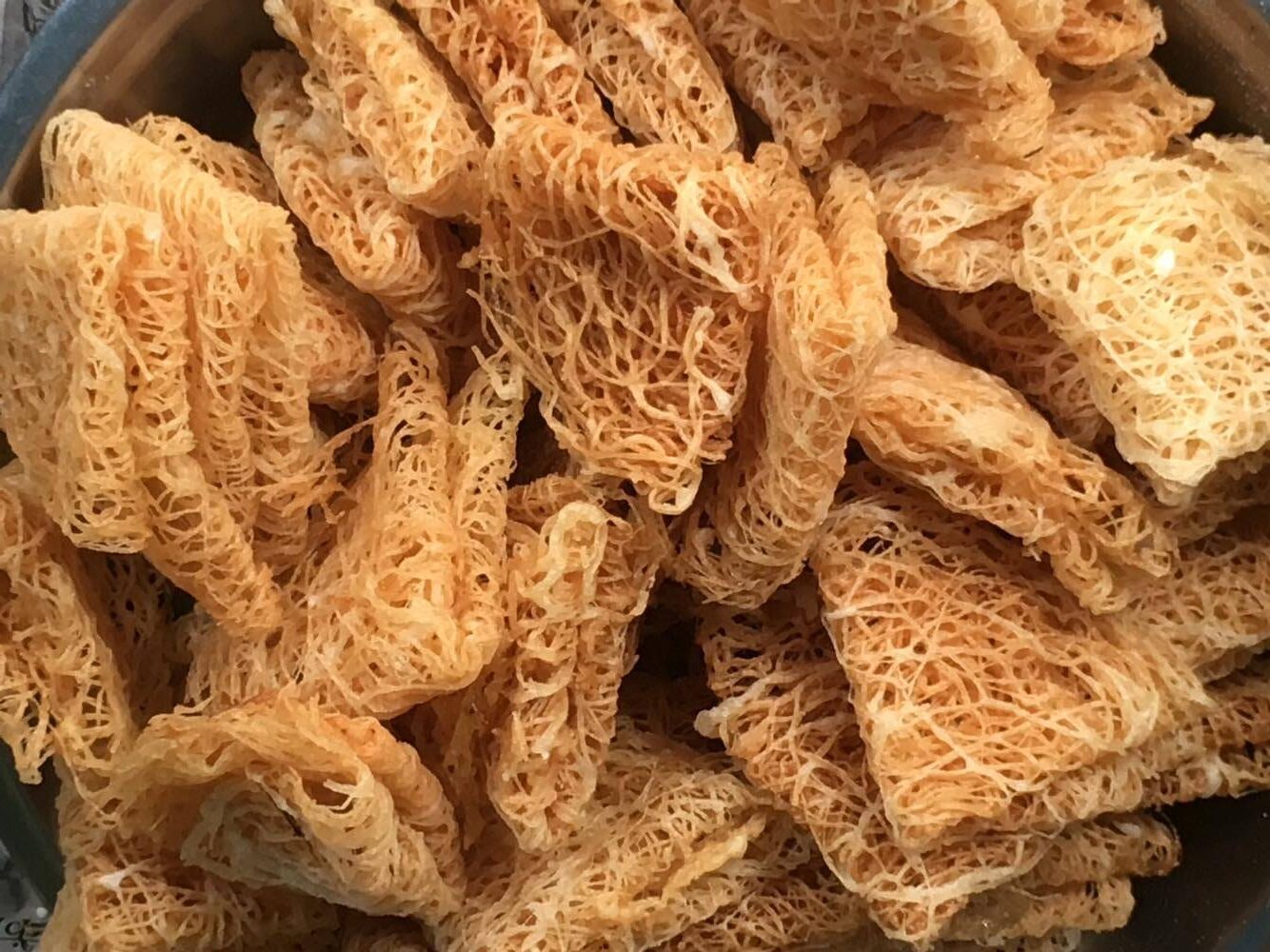 Sarsatia is undoubtedly one of the rarest sweet gems of Odisha. It is a sweet only available in the Sambalpur district based on a heavily guarded recipe. This deep-fried crispy treat is made out of a batter of rice powder and sugar water mixed with the resins of twigs of a very rare tree called Ganjer which only grows in the deep forests of western Odisha.

Southern Odisha food culture is much influenced by the cuisine of South India especially the Andhra region. The dishes are mostly tangy, hot and savoury following closely on the south Indian technique of preparation. 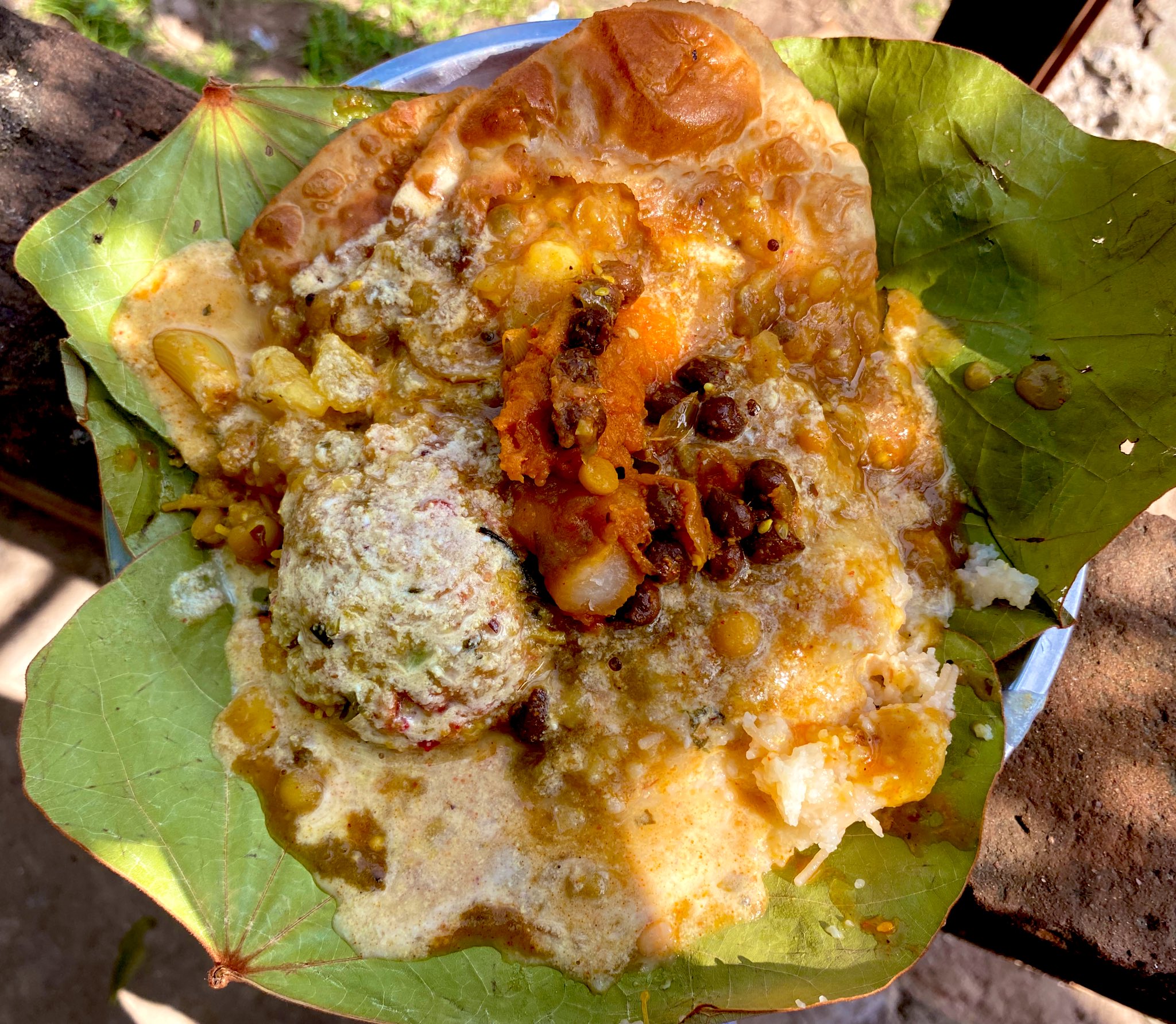 Puri Upma is a breakfast dish popular across the Ganjam district. It is another dish that is served in layers with multiple components one above the other on a single plate. There is first the puris or deep-fried flat pieces of bread over which the upma is served. Over the puri and upma, other components such as guguni, a spicy mix of vegetable gravy curry and a white chutney is put to enhance the overall taste. 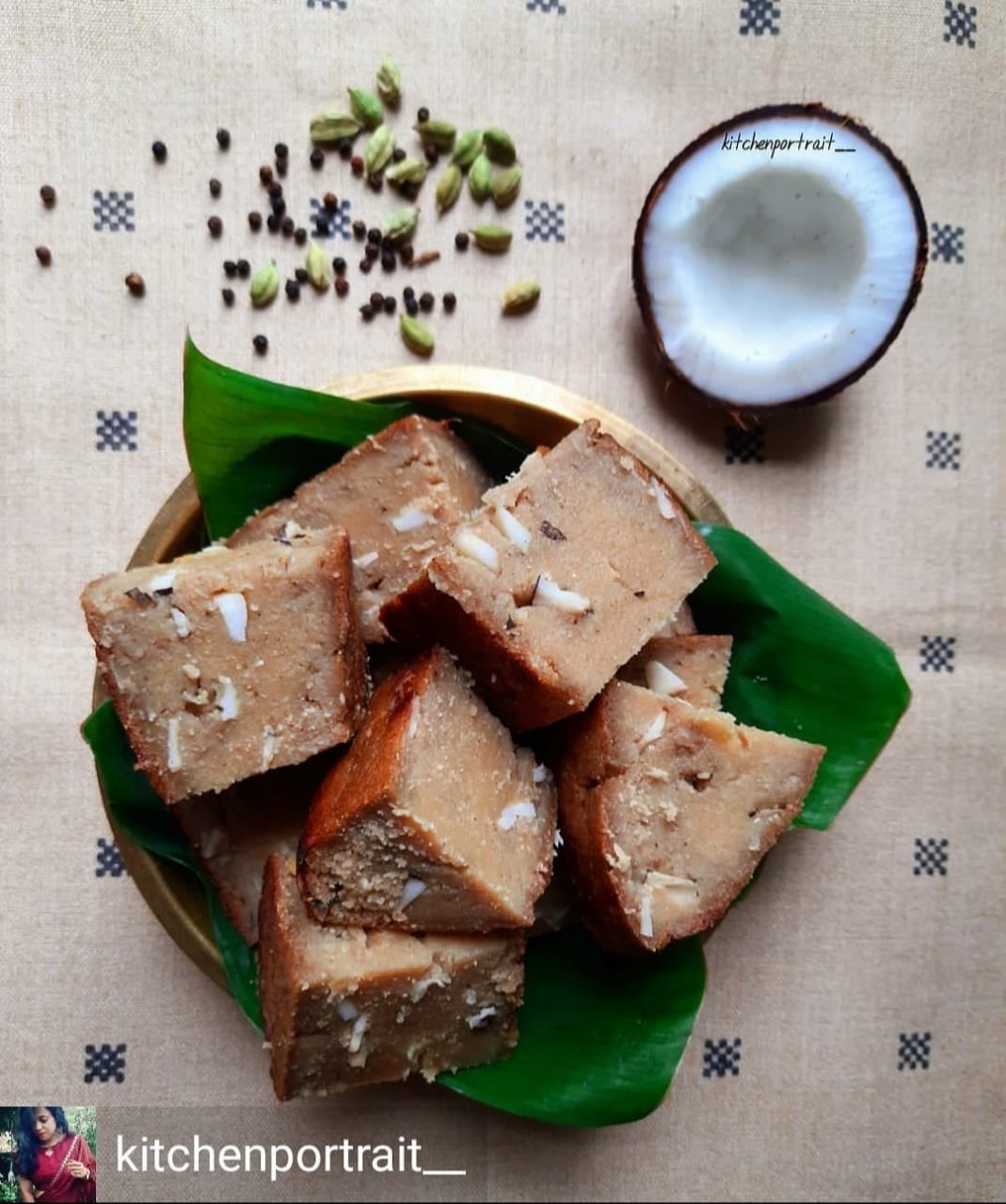 Poda pitha is a slow fire-baked cake from the Kalahandi district. It is made by slowly baking a batter of fermented rice, black gram, grated coconut and jaggery overnight in a sal leaf packet. The final pitha is a fragrant cake with a slightly burnt crust with a soft white sweet inside. It is a dish that has been made into the Jagannath temple menu and is said to be a favourite of the sibling deities.