A non-horror look at cannibalism 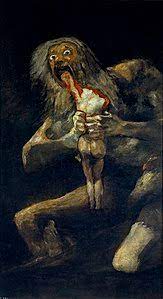 The modern-day outlook of cannibalism is gory murder and live roasting of the victim like the Pirates of the Caribbean by savage tribals. Many would-be surprised by the history of cannibalism spanning through the supposedly civilised world.

The tale of Cronus

Greek mythology has the earliest evidence of cannibalism with some variations stating that Zeus ate his wife Metis as it was predicted that their second child would defeat him. Tantalus, a character from Homer's Nekuia prepares a stew of his son to please the gods. There is a dramatic story of Athens, a descendant of Pelops who invited his brother Thyestes for a 'reconciliation dinner' and served a steak of meat derived from Thyestes's son. There are two instances of cannibalism in the House of Athens. A particularly nasty story from Ovid's Metamorphosis involves rape, disfigurement and cannibalism as revenge. This Greek obsession with feeding sons to their fathers started with Cronus. He married his sister Rhea but was warned that his children would be his end. So he swallowed his newborns Hades, Hera, Hestia, Demeter and Poseidon. When Zeus was born, Rhea tricked him into eating a rock and saved her son. This was the theoretical origin of cannibalism in the world.

"Everyone gives the title of barbarism to everything that is not in use in his own country."

Christopher Columbus discovered America in 1492, the place was populated by trials known as Red Indians. There was a group called the "canabs" who made violent raids and cooked their spoils. They consumed their flesh later in a public ceremony to signify the superiority of the predator over the prey. When Columbus reported this back to Spanish Queen Isabella, she immediately ordered the practice to be banned. Columbus had exploited state funds for his expedition on the promise of the new land providing gold. Later on, he could not acquire the gold and inhabitants resisted his plunder, he began labelling anyone who opposed him a 'caribe'. While travelling from the US to Spain the word became 'canibe' and later 'cannibal'. It was used by colonists to dehumanise the people of conquered territory. The signs of survival cannibalism are palaeolithic with several human bones being discovered with teeth marks. When people had to live through famines, unsuccessful sieges or unfortunate expeditions had only two options. They could either starve to death or eat the bodies of the dead.

Eureka! We found the magic cure

Back in the 15th century, Europeans thought that they had stumbled across a magic cure for epilepsy, haemorrhage, nausea, bruising, and virtually any other medical ailment. It was marketed like multivitamins are today, people preached that everyone needs it for a healthy body. This brown powder could be mixed into drinks, made into salves or eaten as it is. This powder was called Mumia and was made by grinding up mummified human flesh. At first, stolen mummies from Egypt fanned the Mumia craze in Europe. As with every bandwagon trend, demand was stairs ahead of supply and people started stealing rotting bodies from the cemetery to make Mumia. This continued for hundreds of years and was even listed in the Merck Index, one of the most popular medical encyclopaedias. Blood either in liquid or powdered form was used to treat epilepsy while human liver, gallstones, oil derived from the human cerebrum and pulverised hearts were popular medications. In China, the written record of socially acceptable cannibalism dates to 2000 years back. The most common form was filial cannibalism in which the son or daughter of a dying person would offer a piece of their flesh to their parents. This was supposed to be the last alternative to save the sick parent. It usually involved flesh from the thigh, arm or less often a finger. In New Guinea, the dying person would mostly make his funerary ideas known in advance. They often told their family members to eat their flesh thus spreading a deadly disease, Kuru.

Vestigial remains of the practice

There are several tribes in the world which still practice cannibalism in their communities. Like the tribes of Naihehe caves of Fiji and the Korowai tribe of New Guinea. Cambodian soldiers are believed to have consumed the heart and liver of their enemies to survive in the Khmer Rouge rebellion. In 2001, Armen Meiwis from Germany killed and ate the flesh of a willing victim as part of a sexual fantasy. At the United Nations meeting in 2003, a pygmy representative claimed that the Congolese rebels were 'roasting and eating' his people. In 2012, Florida police found a man-eating the face of the man he murdered and had to shoot him. In India, the Aghori Monks perform cannibalism to achieve spiritual enlightenment. They do not kill people but use the bodies of dead people from the cemetery. Though eating the flesh of another human being is considered the ultimate betrayal of mankind, it is an inseparable part of the culture and human psyche. Self-cannibalism or autosarcophagy is the human instinct of consuming its dead cells. It is exhibited in people who nibble on their nails, eat the dead skin off chapped lips or immediately suck the blood off small scratches.

It is common in marine life with more than 80% of aquatic life engaging in cannibalism at a point in their life cycle. It is useful for animals as it regulates their population and allows spread of individual gene by the survival of the fittest principle. It can potentially reduce the prevalence of parasites in a population though cannibalistically spread pathogens generally involve alternative ways of infecting the host. While cannibalism has certainly lost its nutritional appeal to the 'homosapien' population with many people even leaving animal meat to become vegan, it still remains important in the animal kingdom.