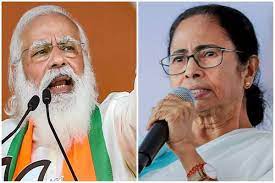 The historic victory of the Trinamool Congress in the West Bengal Assembly elections has stunned everyone, regardless of political affiliation. Mamata Banerjee's Trinamool Congress (TMC) won the West Bengal legislative assembly elections in 2021, ending the nerve-wracking suspense. For various reasons, the Bengal elections were critical for India's political ecosystem. This poll was the first Vidhan Sabha election in West Bengal, where the BJP had portrayed itself as a dominating force since the party's meteoric rise in the country began in 2014. West Bengal is one, of the few states where the BJP has not yet taken power, either directly or through its alliances.

Given Mamata Banerjee's big victory in the wake of widespread TMC defections, and the BJP's campaign path, (which included Prime Minister Narendra Modi and Home Minister visiting Bengal multiple times in recent months), the TMC's triumph is likely to bolster the power of regional parties, forming a stable foundation. Even before the elections, the BJP had established itself as a formidable force in Bengal. With their seat share increasing 26 times between 2016 and 2021. Thereby making it the biggest opposition party in the West Bengal legislature.

Whether it is Narendra Modi versus Mamata Banerjee rhetoric and personal attacks on each other; polarisation, the Citizenship Amendment Act, or the subject of honoring West Bengal's icons in the Assembly elections, the Trinamool Congress, beat the BJP at its own game by turning around to its advantage.

Mamata Banerjee's ChandiPaath during rallies in a state that worships MaaDurga undercut the BJP's "Jai Shri Ram" cry, which was so forceful in Uttar Pradesh.

Yogi Adityanath was also not a good choice for the campaign. His warning to organize an "anti-Romeo squad" and mobilize Love Jihad if the BJP is elected to power failed to sway people in the state.

Despite the BJP's attempts to polarise the Hindu vote, the Hindu poll was split. Women have massively voted for TMC.

The BJP's outreach to women by emphasizing the benefits of the center's welfare initiatives such as Ujjwala and Swachh Bharat did not result in electoral gains because Mamata Banerjee remained to rule them. Her Kanyashree finances and cycles for girls, and her appeal among them as one of their own, helped her.

Prime Minister Narendra Modi's repeated use of the "Didi-o-Didi" statement in his speeches drew sympathy votes for her. Her prospects were not harmed, by comments about her leg injuries or the corruption charges against her nephew Abhishek Banerjee.

The BJP had hoped that the anti-corruption issue would gain traction. Mamata has been criticized by Prime Minister Narendra Modi, Home Minister Amit Shah, and BJP Chief JP Nadda for favoring a syndicate, enabling tolabaazi (cut money), and diverting relief funds for the Amphan cyclone. However, the cyclone-affected people of South 24 Parganas voted for TMC.

The BJP failed badly, not just in terms of the ultimate numbers on May 2nd, but also in its strategy and campaign management. The BJP never looked to be fighting a battle worthy of a national party of its scale. Its campaign strategy was characterized by arrogance, hostility, chauvinism, and traditional patriarchy.

On the backs of ‘cut-money, tolabaazi,' the BJP went to town, appealing for votes. After that, it was constituency after constituency. There was nothing fresh in their speeches. Their assurances seemed insincere. All the Bengal people could hear were promises of statues and screams of Jai Shri Ram in a language they did not understand.

Bengal's elections were fought, based on two primary themes: identity and symbols. Leading political instruments utilized throughout the campaign included the identification of larger-than-life leaders, religious identity, and the regional identity of West Bengal and its culture. While the BJP was projecting Prime Minister Narendra Modi as the face of ‘AsolPoribartan' (Real Change), that would usher in an era of ‘Sonar Bangla' (Golden Bengal), chief minister Mamata Banerjee was relying on her identity as a Bengali daughter with slogans like ‘Bangla NijerMeyekeiChaye' (Bengal wants its daughter), and 'MamataDidiarek bar' ( (Elder Sister Mamata one more time).

Identity has a significant role for Bengalis. Mamata Banerjee did a fantastic job with it. She hit the BJP right where it hurts the most: its identification. Mamata spoke to the people in coarse Bangla, the Bangla they understand, while BJP national officials went on, to discuss religious identity in Hindi week after week. On the one hand, the BJP aggressively marketed hard-core nationalism. Its vision of ‘Ram Rajya', and ‘Akhand Bharat' is a crucial political aim. However, the TMC was successful in effectively expressing Bengali identity. It was the Trinamool Congress that successfully leveraged Bengali identity and culture to bring everyone together. This leverage most likely sealed her party's colossal victory.

In Bengal, the women voted for a woman, and the powerful woman assured them money and a brighter future. People have a frame of reference for Mamata. She has made a significant contribution to the villages. There is no industry, and jobs are still a long way off, yet there are roads in the rural communities. If Didi returns to power, every house has heard the promise of money. The BJP had no cards to play. Statues are not, voted on. In this election, promises to help Hindu Bengalis in another country do not win votes.

Then who, if not Modi? It was picked by regional parties, who have utilized it successfully ever since. It happened in Delhi with Arvind Kejriwal as the AamAadmi Party's face, and it is happening now in West Bengal with Mamata Banerjee as the TMC's chief ministerial face. In all these elections, the voter had no choice but to vote for the party with the most secure local/regional leader. It is due to the void on the opposite side of the political spectrum. The BJP became a second choice for Bengali voters due to the lack of a prominent indigenous leader with a distinctly political character.

Are the new voter ID requirements a step away from democracy?