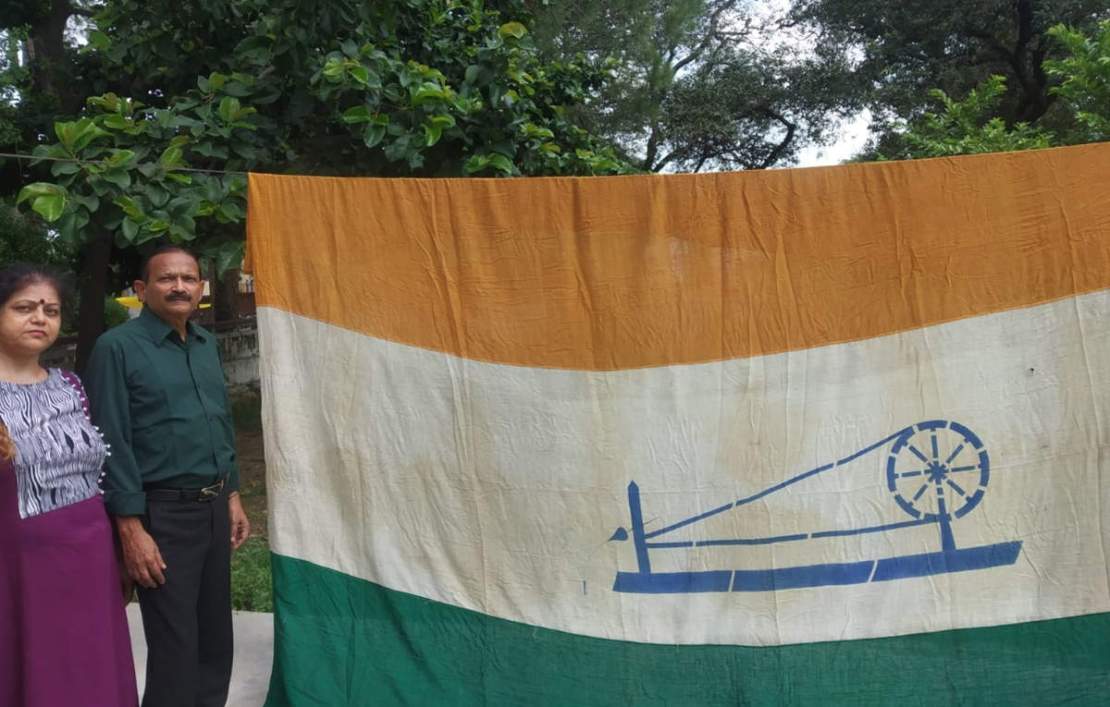 MEERUT(UP): Major General Ganpat Ram Nagar's family is still guarding the former Indian National Flag that was hoisted in Meerut's Victoria Park in 1946 by Pandit Jawaharlal Nehru. Ganpat Ram's grandson, Dev Nagar, possesses the flag which is still in quite a good condition with perfect shape and colour as it was earlier. He told the family had preserved it for the successive three generations. He further added how it’s been inherited as a legacy from his forefathers. The journey to the invaluable inheritance began with his grandfather, and after their demise, his father took the responsibility, and now he has acquired it in his name. It has been 75 years now and they are still guarding it with the same determination at their house in Hastinapur. The family feels so proud to uphold their grandfather's all-important asset.

A colossal session of Congress was held just a few months before our freedom on the 24th of Nov 1946 at Meerut’s Victoria Park. The session has the president of the Congress JR Kriplani with some other members including Sardar Vallabh Bhai Patel, Pandit Jawaharlal Nehru, Sarojini Naidu, Shahnawaz Khan, and others. On that day Pandit Jawaharlal Nehru had hoisted the Indian flag, which the Nagar family is safeguarding.

The flag before our Independence

The National Flag of India before we came to be known as the Independent Nation was different from the one after Independence.  The flag of India in 1946 was divided into three colours, the first part (upper part) of saffron, the second part (middle part) of white and the third one (lower part) of green and also there is a figure of charkha in the centre of the white part. It is a 19* 4-foot khadi flag. This flag was once our national flag before we became an Independent Nation on the 15th of August 1947.

Who was Ganpat Ram Nagar?

Major General Ganpat Ram Nagar also known as 'GR' was born in 1905 in Meerut, Uttar Pradesh. He completed graduation from a Government Inter College. In college, his principal, Col TS O' Donnell, sent him to Sandhurst Military college in the UK. The decision was made seeing his potential and skills. Later on, after two years of training, he was recruited into the British army as a King's commissioned officer. After the fall of Singapore in 1939 and seeing the profusion of the British army in the subdued land, he revolted, however, was caught by the Japanese. When he was released, Subhash Chandra Bose appointed him as 'Major General and GOC of the Malaya division (third INA division)'.

As told by his grandson Dev Nagar, it was the first time when the Congress session had witnessed the INA (Indian National Army) officials and Maj Gen Ganpat Ram Nagar was given the charge of taking care of arrangements and managing the volunteers by Nehru. On that day, Nehru hoisted the flag at Victoria Park of Meerut. Dev Nagar reiterated the words spoken by the then PM of India: “Humne is jhande ke neeche azaadi ki ladai ladi hai, yehi humaare watan ka jhanda hoga" As the core event manager, Ganpat Ram received the flag after the event. From that day he and his family have always been taking care of it. His second grandson, Guru Nagar told about frequent visits of politicians and leaders when his grandfather was alive to get the flag though they never agreed to it. Since they know their duty to protect it from being used in the wrong way.

The Nagar family feels so proud and said " It is a matter of pride for us that we as a common family are guarding our precious memento. This reminds us of the struggle and sacrifices that our freedom fighters had made to make us an independent nation." Despite the flag has always been with them, now the family is planning to hand the flag to the Shaheed Smarak Museum in Meerut. The reason for presenting the flag to Meerut’s museum is to continue to cherish it till the last breath of life. However, they will relinquish it after the approval of every member of the family, as told by his son.