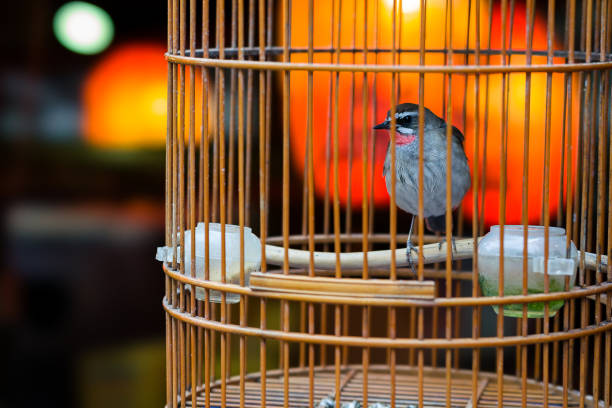 Have you ever wondered what would happen if we didn't walk for one day? Need a deep thought. If you can't bear that then think about those speechless creatures whom you want in cages just for your pleasure. When we say Birds, what comes to our mind is sky and flying. But are we letting them fly? They are born to fly just like we are born to walk.

Whenever there is a word "Freedom" we normally feel proud and get emotional because we know what it means to us. We often speak for freedom of the nation, freedom for women, and more. I have a thought...Is this only because humans can express? What about those who can't speak or express themselves? Isn't the imagination of a person in jail scary? Then how could we think about jailing those innocent birds?

For so many decades birds have been caged everywhere in this world. People caged them for their pleasure. What attracts people most is their colorful feathers, their playfulness, their voice, and of course their ability to fly. They are gifted with wings to fly so they should never be captivated and kept inside cages. Their Beauty lies in their congenital freedom to fly.

You must have often seen in films, poems, and stories that Flying birds are regarded as a symbol of freedom because they have the potential to touch the sky when they want. But what I'm observing is way different. Sometimes I am worried about how our next generation will take it because if this continues they are always going to see these birds in the cage. This means that they will never be able to know the real meaning of freedom. Sometimes it seems that airplanes will possess this sky and only cages will become the fate of the birds. I feel very bad whenever I see a bird in Cage. They are also creatures of god just like humans. They deserve equal freedom like us.

Birds are one of the most vulnerable creatures on earth. They are playful creatures who love to talk through whispers and chit-chats, also they do some fun activities like sand baths and playing hide and seek to amuse themselves. They are also smart and intelligent. They build nests and feed their babies. The studies show that most of the birds are fun-loving. It takes time for them to choose another mate if the one dies. Studies have also found these birds grieving when one of them dies especially the penguins, pigeons, and albatross. So it shows that they have emotions. When they are kept in cages they feel depressed and departed. Some people do not even stop at caging, they cut their wings so that they can't fly. It's the same if someone cuts our legs. Birds are also being used for trade to fetch financial profits. Some zoos also present birds in cages. Trapping of birds is done with the ancient methods that are cruel enough, including those, catching through nets and in present days, a substance, called slaked lime, is used to stick them up and catch them. Some of these methods cause serious injuries to the birds. Numerous studies have been done that show the abnormal behavior of birds who are kept in cages as pets. It's quite obvious, what else could be expected when such a playful creature is imprisoned. It will affect their minds. The abnormal behavior has been found in caged birds especially in parrots and songbirds. The reason is housing conditions and inappropriate nurturing.

In India, some laws, like The Wildlife Protection Act of 1972, have also been made to protect these innocent creatures. Then there was an amendment in the Act of 1991 that bans the trading of indigenous birds. There is a Convention on International Trade in Endangered Species that bans the trade of foreign birds. But still, you can easily find some species of birds sold in local markets.

Giving a home to a homeless bird is not a crime but keeping them in a cage and not letting them go out is a crime. If you honestly want help with birds just seek help from the nearby bird sanctuary. The birds will be more safe and happy there rather than being in a cage at your home. They are not going to conduct strikes for captivating them because they are not humans, but as humans, we need to understand this. We should stop buying birds and suggest others not to buy them and put them in their houses. If you have seen someone illegally keeping birds in their houses, immediately inform the chief wildlife warden or the respective authorities. Spread awareness for not caging them.

If you want to see those beautiful birds then see them in their habitat and believe me they look more beautiful there. They are made for the sky. Don't steal their freedom. Let them fly.