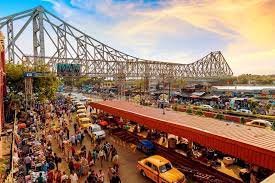 Kolkata, the city of joy is well known for its architectural prowess and cultural background. Bengal was the capital of British India. The infamous Zamindari system (Permanent Land Revenue Settlement) was incepted from this vein of India.

During the Partition of Bengal in 1905, Rabindranath Tagore exerted Rakhi to honour the essence of brotherhood among Indians. He wrote several poems on the subject. Raksha Bandhan was significant of nationalism during the partition of the then-capital of India.

At the time, tram service was available in Kolkata alone. The Calcutta Tramways Company was formed in the year 1880. An old network of trams existed in India from 1902.  The electric tram was invented in the nineteenth century. It first ran through Esplanade to Khidirpore on March 27, 1902. While trams gradually became inoperational in Chennai and Bombay, Kolkata managed to retain them and thus, boasts of the sole functional tram system in the country today.

There are seven tram depots in the city - mainly Belgachia, Rajabazar, Park Circus, Gariahat, Tollygunge, Kalighat and Khidirpur. It is an eco-friendly transport system which does not run on petrol and therefore, does not cause pollution. Trams, however, are more accident-prone than cars.

Behala Art Festival held in the Behala area of the city has made efforts to depict the shared history of India and Pakistan. It highlighted the Indo-Pak war of 1971, which shook the nation and reminded humanity of its fundamental essence. The festival, in the course of different editions, has exhibited the concept of grayish-black wall painting. Oil paintings were used to successfully illustrate Bengal of those days. Primary colours, like black, were used to highlight caricatures.

Bengal finds an indisputable mention in a conversation about the artistic wealth of India. KUMORTULI has to be recalled in such an exchange. A sculptors’ locality in North Kolkata, idols of Hindu Goddesses Durga, Saraswati, Lakshmi etc., are imported abroad from Kumortuli. Artisans use kacha mati to make effigies out of clay and hay. Spray paintings and bunsen burners are used to add colour and maintain the right texture. These idols are bought and sold extensively during fall and are symbolic of the arrival of Goddess Durga.

Durga puja or Dussehra is celebrated for 10 days with many auspicious rituals in the count. Mahalaya is celebrated on the very first day which denotes agomoni (welcoming) of the Goddess. It is, then, followed by exuberant celebrations. Famous Durga puja dances like Chao Nach and khamta are celebrated with joy and vigour. Here the Ravana, known as mahishasur, is killed by the deity Durga, signifying the triumph of good over evil. People rejoice, with sindoor khela and mukh misti.

108 lotus flowers are farmed to meet demands on the day of Ashtami. Sandhi Puja is also celebrated with 108 pradeeps (earthen lamps) being illuminated to offer anjali to the god. It is a special ceremony held on ashtami, considered the most auspicious day out of the four days of puja.

The celebration continues till Princep ghat where the dhakis and people are joined by labour workers, who carry the idol to the Ganges and undertake bhashan or the immersion.

January onsets the celebration of poush parbon which is celebrated with puli, patisapta etc., delicacies that form a vital part of the cultural heritage of Bengal.

Macher jhol is the ideal dish Bengalis tend to get associated with. Fishes that add to the diversity of the country are imported from Bengal. Tilapia, maguro, rui, katla, and the king of the fishes - ilish (Hilsa); make up the delectable gastronomical affair of Bengal.

It is well said that Kolkata is the City of Joy but we only realize, it can be called the City of magical vibes. Nothing is certain about wizardry but in the city of joy, magical wizards like PC SARKAR - famed for his magic tricks; certainly, merge with the vitality of the city to offer an experience unlike any.

1 month, 3 weeks ago by Whitney-Edna-Ibe

Another mind-blowing piece. I found it intriguing and thoroughly done. Keep writing your heart out.

HOLI- The Epitome Of Unity And Diversity