“Big Mac is the story of McDonald’s, and we will have... Russia is self-sufficient in everything the West has to offer.”

The golden logo that Russians have known for more than 30 years has changed, it is now a burger and two fries, but it still forms the letter M, with the slogan “The name has changed, but love will never die.” The Russians are keeping everything about McDonald’s except the name.

After McDonald’s announced its withdrawal from Russia in May in response to sanctions, Alexander Govor, a Siberian entrepreneur who owns the local franchise, bought the original McDonald’s assets and renamed it, opening it on 12 June under the new name “Tasty and that’s it” (Vkusno & tochka).

The flagship shop in Pushkin Square in the heart of Moscow attracted dozens of people queuing up for another familiar burger and fries - the same shop that opened in 1988 as the first McDonald’s in Russia with thousands of Russians outside, filling the square with people eager to taste the “taste of capitalism from the West.” 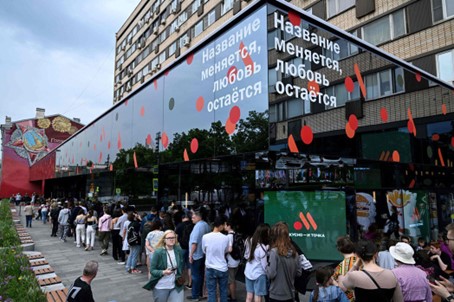 (On the opening day, there were queues of customers outside the shop.)

Now that Putin has launched the Russo-Ukrainian war, cutting Russia off from the Western world once again. Can Russia really leave behind a complete copy of everything that comes from the West?

The menu content and website interface of Tasty and that’s it is very similar to the original McDonald’s, except for some items such as the Big Mac and the McFlurry. The Chicken McNuggets and Fish McNuggets have been renamed as Chicken Burger and Fish Burger respectively.

The new menu is also priced lower than McDonald’s, for example, the double custard burger was originally priced at 160 roubles and is now priced at 129 roubles, the McFish is priced at 190 roubles and the Fish Burger is priced at 169 roubles each. Tasty and that’s it is also looking for a new supplier as Coca-Cola has also withdrawn from the Russian market.

On the opening day, a man held a sign inside the store saying “Give back my Big Mac” to express his dissatisfaction with the “fake McDonald’s”, but other patrons argued that “the taste has stayed the same... The coke is different, but the burger really hasn’t changed at all.”

Alexander Merkulov, quality control manager for Tasty and that’s it, said that the ingredients of the burger had not changed and that the new brand still used the original McDonald’s equipment - and of course, the interior of the restaurant remained the same.

However, as the Russian operator was no longer allowed to use all the McDonald’s logos, and Tasty and that’s it was opened in a short space of time, there was not enough time to redesign the packaging. The French fries boxes and drink cups are plain white, the takeaway paper bags are plain brown, and the ketchup and other sauce packets are blacked out with the original McDonald’s logo. (Tasty and that’s it supplies ketchup and other sauce packets with the original McDonald’s logo scrawled in black.)

Oleg Paroev, the CEO, also pointed out that all the meals served at Tasty and that’s it are made from Russian ingredients, except 2% of McDonald’s original recipes. Speaking at the opening press conference, Paroev said “Our goal is that our guests won’t notice any difference in the quality of the food or the atmosphere.”

The first 15 Tasty and that’s it stores are opening in Moscow and surrounding areas.

Paroev told the press that 200 shops will reopen by the end of June and that by the end of the summer there will be 850 Tasty and that’s it shops across Russia. This marks the beginning of an era in which local owners will replace McDonald’s as the leading fast-food restaurant in Russia, and symbolises the parting of the ways between Russia and the West.

From the days when McDonald’s entered the Iron Curtain in the footsteps of Western ideas, Western culture and Western cuisine on the eve of the collapse of the Soviet Union, Russia’s rulers are now using military and artillery fire to drive away from Western order and values and prove that they can replace them.

The owner of Tasty and that’s it, Gover, bought McDonald’s assets in Russia for a “nominal price” of US$1.4 billion, well below market value, plus a promise not to fire the original 62,000 employees for two years. (A worker removed the famous golden arches sign outside a McDonald’s in St Petersburg.)

Russian authorities have stated that McDonald’s has the right to buy back the assets within 15 years, but Gover said, “They made it clear to me that they would not buy back.”

Commenting on the future of Tasty and that’s it, and whether it could completely replace McDonald’s in Russian life, Gover said: