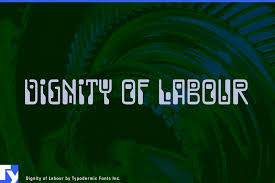 The dignity of a laborer is a philosophy that all types of jobs are equally respected with no distinction between poor and rich. It deals with the occupation that does not deal with superior or less fortunate but with decent jobs to lead humanity. Regardless of whether one's career involves physical work or mental labor, it is held that the position deserves respect. It deals with the equal level of employment with manual labor. In earlier times daily, enslaved people were brought and sold in the market. They lost their dignity and used to perform all sorts of laborious and hard work. It has been observed that all types of work done with labor is for the excellent fare of the society and development.

The laborers, through trade unions and different groups, have earned success in attaining a recognized position in society. When we talk about fundamental rights, the working class does not enjoy that respect enjoyed by the business executive,white-collared people, and merchants. Many learned people do not appreciate and practice the principle of dignity of labor. They prefer high-profile jobs.  For example, a science graduate is in a nearby city rather than following his father's occupation. Thus it is not wise to look down upon manual labor.

Manual laborers are significant and necessary for smooth functioning in society. Although today most of the work in industries and factories is done by machines, productions can be paused without the manual assistance of the workers. Lakhs of laborers work in mines, agricultural sectors, the construction field, and industries. Although they work with the help of machines, they must operate and maintain the machine. Inventions and the introduction of machinery have given rise to a new class of industrial workers. If workers slow and stop the import and export of foreign goods, then the company would not work. Thus it is our primary duty to show them respect and offer dignity. In many western countries, the satisfaction of a laborer is recognized. Young people do not mind earning money by doing pan time work as food delivery boys or waiters at restaurants. Much of the domestic work, like cooking food and washing clothes, is done by the family members. However, in countries like India, domestic servants are scarce, and their demands for wages are high enough. Many middle-class families pay more to servants to maintain their prestige in society. A sense of dignity for laborers should be conveyed to students in schools and colleges. They should be encouraged to participate in various kinds of programs. If their minds are cleared of the view that none of the work is undignified and humiliating, the problem of unemployment will be solved to some extent.

Domestic help leads to cleaning clothes, washing utensils, etc., that the female member of the society does. Lenin came up with the idea of communism, and Mark came up with socialism. But in a democratic country like India, people have the right to do what they want. An honest day's work does not earn a person's respect. And not much money either. So in the modern-day age, money deserves respect, not the job we do. A mechanic, a domestic help, a driver cannot walk with their heads high. Even though they work an equal amount of time, they are looked down upon. The definition of the dignity of a laborer is that no work should be looked down upon. No one should be treated with any less respect just because of the work they do.

In a democratic system, the rights of the people are protected. Everyone is equal in the eye of the law, the government, and the country. But no one is equal in each other's eyes. Of late the present environment of society, the dignity of a laborer is considered the major topic s of the era.