Diving Deep: Causes and Consequences Of World War I 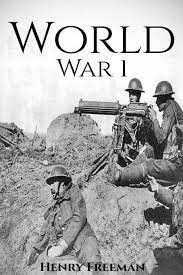 Started on the 04-08- 1914, the First World War has been described as the first war of its kind in human history. It was the first global war to cover all continents and all people; white men, black men, yellow men, and American Indians. Fighting occurred on nearly every continent except North America and every ocean except those surrounding the poles. It was the first example of total war, meaning that the domestic population and the patterns of civilian lives were affected in this war like never before. Lenin described it as an “Imperialist War.”

Till the end of the 19th century, Germany became a stronger nation in Europe by occupying various colonies. Many historians believe that the theatre of World War I was in Europe. The war was started when Germany invaded Belgium. A few days back on, August 1. Germany attacked Russia; on August 3, Germany attacked France; and lastly, on August 4, it attacked Belgium, from where world war 1 started.

In 1800, the Austro-Prussian war took place in which Germany occupied some areas of Austria-Hungary. The proclamation of the German empire or unification of Germany took place in January 1871 at the Hall of Mirrors. The Treaty of Versailles of 1871 ended the Franco-Prussian war and signed between Germany and France on 26-01 1871. In this war of Franco-Prussia, Germany occupied the Alsace-Lorraine area of France, which caused widespread anger among France. Post-1871, France made a policy, to get back its land and started making good relations with Anti-German nations.

During 1870, Germany was ruled by Bismarck, who emphasized the concept of balance of power for the establishment of peace in Europe, and further, Bismarck decided not to occupy more colonies.

• In March 1878, Russia defeated Turkey and asked for an agreement which is known as the “San. Stefano” agreement. In this agreement, Balkan states were announced independence by Russia. Austria and Hungary were unhappy with this agreement of Russia. Meanwhile, Russia started increasing its Navy power, and Britain was displeased with it because it would have increased the influence of Russia in Asia.

In June-July 1878, the meeting was called by Germany, popularly known as the “Berlin meeting (Berlin Congress)”. Hitherto Austria-Hungary annexed Bosnia and Herzegovina.

• In 1882, an alliance was known as the “Triple Alliance” between Italy, Germany, and Austria-Hungary. In 1890, Bismarck resigned, and the rise of Kaiser Wilhelm II began. He again changed the policy of Germany into aggressiveness. And Wilhelm’s want for power overcame his senses, and he became reckless. In 1907, another group was formed, between France, Britain, and Russia: the “Triple Entente”.

There were various causes of world war 1, some of which the most important ones were as follows:

The war was started with the assassination of Archduke Franz Ferdinand, the heir of the Austrian throne, by a Serbian. He had gone to visit Sarajevo, the Bosnian capital, on 28-06 -1914. His assassination angered Austria-Hungary, who wanted to crush Serbia now. Germany also promised to support Austria-Hungary. They gave an ultimatum to Serbia which it refused to comply with due to Russia’s backing. An effort was also made for mediation but in vain. Finally, on 28-07- 1914, Austria-Hungary unleashed a war on Serbia.

This secret alliance was one of the major causes of the emergence of world war I. On the eve of World War, Europe was divided into two armed camps- The triple alliance (an alliance of Germany, Austria-Hungary, and Italy) and the Triple Entente (a union of Russia, France, and Britain). These secret alliances naturally gave rise to suspicion, anger, and conflict.

According to Prof. S. Fay, “The system of secret alliances made the emergence of a war inevitable; it would involve all the great powers of Europe. The members of each group felt bound to support each other to strengthen the solidarity of the group.”

Another cause of the war was the mad race for armaments. Both the alliances wanted to hoard and stock as many weapons as possible to be able to be ready for any potential attacks. This created a sense of fear, hatred, and suspicion among the powers, instead of creating a sense of peace and preservation.

This was one of the potent factors which added tensions. Due to industrialization in most of the western European countries, the unhealthy competition began amongst the European powers to find colonies for their products. By the end of the 19th century, England, France, and Russia had built up massive colonial empires, but Germany was left with a smaller share of extra European possession.

Germany believed itself to be the greatest nation and, did not the subordinate place assigned to her in the imperial sphere. Consequently, when Germany tried to capture the markets, which were already in the hands of Britain, it led to bitterness between the two. Great Britain was not prepared to give up its colonies, protectorates, the sphere of influence, and markets, but Germany was bent upon getting them at any cost. Under such circumstances, the war became inevitable.

Narrow nationalism or competitive patriotism was another cause of the war. The bitterness between Austria and Serbia over the issue of Bosnia and Herzegovina ultimately led to the first world war because this incident gave a setback to the Serbs for the greater Serbia.

Moreover, Palmer stone in England, Napoleon I and Napoleon III in France, Bismarck in Germany, and Mallzini and Cavour in Italy, had infused the freshet of nationalism, into the minds of people. To an extent, that nationalism that the subsequent people tasted never collapsed despite the cross-currents of history and rather supplied fuel to the wild pyre of the world war.

The first world war resulted in the decline of the economy of Europe. It was in danger. Many historians believed that in terms of money, the war is estimated to have cost about 400 Billion Dollars. The war led to devaluation and economic depression. During the war, several governments raised loans from all possible quarters for the maintenance of their armies and ships, which were beyond their repaying capacity.

Germany was the most devastated nation in the war.

Treaty of Versailles in June 1919: An immediate outcome of this war was “The Treaty of Versailles” took place at “Hall of Mirrors”. This treaty was attended by diplomats, and the most prominent leaders were Woodrow Wilson of America, British Prime Minister Lloyd George, French PM George Clemenceau, and Italian PM Orlando.

This group of diplomats, popularly known as “Big Four” took all the crucial decisions. Under this treaty, war guilt was imposed, on Germany. Several sanctions were imposed, on Germany. SAARS Coal mines of Germany had to be administered by France. It was bound to pay 6.6 Billion Pounds. 13 percent of German territory, 13 percent of the economy, and 7 million people of Germany were parted. Under this treaty, military sanctions on Germany were, imposed.

It was asked to have no airports. Germany was not supposed to have more than 1 lakh army men and had to abolish conscription. It was asked to reduce its navy. In this treaty, Woodrow Wilson played an important role by giving his “14 Points”. Among these 14 points, three of the points were most important.

The great Historian E.H Carr described the Treaty of Versailles as the “ Dictated Peace Treaty”.

Founding of League of Nations

After WW1, the need for an international body of nations that promotes security and peace worldwide became evident. Many believed that such an organization would help avoid another war. This belief caused the founding of the League of Nations.

Transformation of Nationalism and Complications in Europe

Nationalism had been growing in Europe for decades before World War I began, but the war's aftermath saw a significant rise in new nations and independence movements. Part of this was a result of Woodrow Wilson’s isolationist commitment to what he called "self-determination." But part of it was also a response to the destabilization of old empires, which nationalists viewed as an opportunity to declare new nations.

The key region for European nationalism was Eastern Europe and the Balkans, where Poland, the three Baltic States, Czechoslovakia, the Kingdom of the Serbs, Croats, and Slovenes, and others emerged. But nationalism conflicted hugely with the ethnic makeup of this region of Europe, where many different nationalities and ethnicities sometimes lived in tension with one another. Eventually, internal conflicts stemming from new self-determination by national majorities arose from disaffected minorities who preferred the rule of neighbors.

We see that WW1 had a huge impact on the world in a social, economic, and political way. The causes were the assassination of Archduke, alliance systems, arms race, aggressive imperialism, and narrow nationalism. The effects were huge and led to German loss of its economy, the League of Nations, the Treaty of Versailles, the transformation of patriotism, and also, social change in the lives of men and women after the war (scarcity of men due to massive deaths in the war).