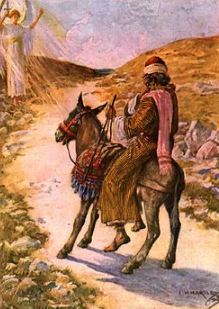 Our Bible Hero this week is not a hero at all, he is not even a Believer of the Israelite God. His name is Balaam and is described by an Alexandrian commentator at the time as a ‘master’ diviner, soothsayer, and foreteller of great renown.

You will find out later why I would not refer to him as a hero, even though he repeatedly blessed Israel despite the demands of the king of the Moabites, king Balek, who wanted the Israelites cursed.  King Balak was afraid that this vast, victorious, Jewish army camped on his doorstep, would defeat his kingdom, wipe out the inhabitants, and take all their possessions.

When the king first sent word to Balaam, Balaam heard directly from the God of the Israelites, that he was not to go. Balaam listened to many gods, performed all kinds of rituals and looked out for signs to be able to foretell the future. This is the first time he had received a direct message from a Deity.

The King was undeterred; he sent more messengers and tons of treasures to tempt Balaam to travel from where he lived in Pethor, alongside the river Euphrates, reputedly 400 miles away! Balaam heard from God directly again who reluctantly said Balaam could go as long as he only said what God told him to say.

Balaam saddled up his donkey the next day and was on his way. It was as if God could see his duplicity – he was listening to God out of fear, and Balaam’s heart was not loyal to God. In fact his heart was loyal to getting rich! Kings in those days paid a large sum to have someone as famous as Balaam come and curse their enemies so they could win the war. It was as if God was saying to Balaam, “Ok have your way, and see what happens”.

Balaam had not gone far when his donkey saw an angel, a messenger of God, standing in the road with a sword. The donkey deviated into a field to avoid a head-on collision. Balaam however was not in tune with God as his donkey was and did not see the angel, so he beat his donkey for deviating from their intended route.

This time they were on a narrow path through the vineyards, with walls on both sides. When the donkey saw the angel of the Lord, it pressed close to the wall, crushing Balaam’s foot against it. So he beat the donkey again.

The New International Version of the Bible tells the rest of the incident:

Then the angel of the Lord moved on ahead and stood in a narrow place where there was no room to turn, either to the right or to the left. When the donkey saw the angel of the Lord, it lay down under Balaam, and he was angry and beat it with his staff.  Then the Lord opened the donkey’s mouth, and it said to Balaam, “What have I done to you to make you beat me these three times?”

Balaam answered the donkey, “You have made a fool of me! If only I had a sword in my hand, I would kill you right now.”

The donkey said to Balaam, “Am I not your own donkey, which you have always ridden, to this day? Have I been in the habit of doing this to you?”

Then the Lord opened Balaam’s eyes, and he saw the angel of the Lord standing in the road with his sword drawn. So he bowed low and fell facedown.

The angel of the Lord asked him, “Why have you beaten your donkey these three times? I have come here to oppose you because your path is a reckless one before me. The donkey saw me and turned away from me these three times. If it had not turned away, I would certainly have killed you by now, but I would have spared it.”

Balaam said to the angel of the Lord, “I have sinned. I did not realize you were standing in the road to oppose me. Now if you are displeased, I will go back.”

Donkeys thousands of years before Christ was born were seen as sovereign, carrying kings and important people, not horses. They symbolized peace. To this day they are very intelligent creatures because of their good memories and ability to know what they can and cannot do. They are also extremely loyal.

The historical life story continues, and Balaam blesses Israel three times and then curses the land of Moab predicting its pending defeat, which happens several years later. Balaam did say everything God told him and in the end confronts King Balak with the truth that “Whatever God blesses no one can change or curse, it will be as He says it will be”.

Balaam also utters a Messianic prophesy before departing from Moab, He predicts the birth of Jesus Christ. Interesting Balaam was the father of the Magi traditions, and almost a thousand years later when Christ was born, the first wise men to see Christ, born as a baby in a stable, were the Magi. They followed the star of Jacob to find Jesus, the same star that Balaam prophesied about so many years before.

I would like to now focus on loyalty. A loyal person has the following characteristics: fidelity allegiance trust duty devotion zeal. I would say they have unquestioning undivided continuous loyalty despite the circumstances they confront.

Balaam’s lack of loyalty to God is evident when he suggests to King Balak: the best way to defeat the Israelite people even though God had repeatedly blessed them is to entice the Jewish men with the beauty of the Moabite women.

God had told the Israelites many times not to be “unequally yoked” with the women of the nations they passed through or conquered on their way to inherit the land God had promised them. The Israelites however had been in the desert for 40 years, a barren experience, and were tempted into sexual immorality with the Moab women.

Their sexual fornication lead to idolatry and the worship of the Moabite god called Baal. God was furious and instead of wiping out the Moabite nation he destroyed many of His unfaithful people with a plague.

This is why I cannot consider Balaam a hero of the Bible because the heroes and heroines of the Bible are loyal and faithful, he was not. He remained an example of someone who serves money rather than God, and someone who caused other people to become unfaithful to God too. The story of Balaam is also a warning to us to not be double-minded, but to follow the convictions of our hearts, and be true to what we believe without compromise.