DRUG ABUSE - A DEPENDENCY OR A COMPULSION? 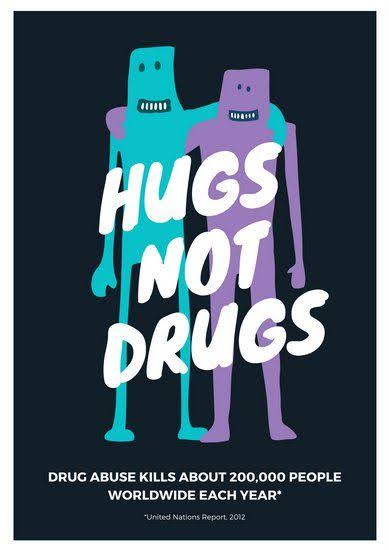 Drugs are chemical substances which either helps a person to heal or makes a person physical and mentally ill. Drugs refer to the medicines that we take when we are ill or suffering through a particular disease. Drugs, also refer to substances which are taken by humans out of curiosity, peer pressure or as a defence mechanism where they think that this intake of drugs can heal or cure their problems. According to a report by the United Nations, there has been 30% increase in the number of drug addicts in India. Drug addiction is not just limited to one or two countries, rather it spreads worldwide.

Drug addiction can take place due to various reasons. Drug addiction is a chronic disease which is very difficult to control or avoid. According to a survey, the most dangerous drugs include – cocaine, Heroin, Digoxin, cough medicines( these definitely serve medicinal purposes but addicts tend to take this medicine in excess amounts), Acetaminophen, Antidepressants, Nicotine and Alcohol. There are number of drugs available in the market on which these addicts thrive on.

Drug addiction cannot be justified but their can be various reasons stated by the addicts because of which they tend to thrive on these substances.

• First, being mental pressure or pressure from external sources which results in depression and anxiety due to which people tend to resort of unfair means to get away with this depression. Rather than seeking help from their near ones, they tend to opt for wrong methods to cure their illness.

• Second, being peer pressure which is indeed the most important reason for the drug addiction taking place in today’s World. Peer pressure can sometimes result in positive outcomes but when it comes to drug addition, peer pressure is the worst thing that can happen. People think drinking and taking drugs will make them cool and different from the others and they tend to think in this way as some of their peers might be doing the same thing. Drugs today have become a cool element or to be specific in our Prime Minister’s words a “ style statement”. Young people of the age of 16-38 years, mostly tend to indulge in drug addiction or illicit trafficking.

• Third, and the most important point is illicit trafficking which refers to the illegal transfer and trade of drugs. People tend to develop this addiction because they have an easy access to these drugs. The availability of drugs is so convenient that they make sure to consume these on a daily basis. India is considered as a hub for illicit drug trade.

The social and economic restriction due to the coronavirus pandemic impacted health and social field. Reports suggest that there has been a widespread of unemployment and trauma due to which there has been a substance abuse among the people in general. Over 2,300 people died due to overdose of drugs in India. According to a report- Puducherry reported the highest drug related suicide rate at 36.8 per 100,000 people. Sikkim, Tamil Nadu and Kerala also recorded several deaths due to drug overdose. The lowest suicide rates were reported in Bihar (0.8 per 100,000), followed by Nagaland and Manipur. More than 80% of the people die because of alcohol and overdose of drugs. The topic of drug abuse has been highlighted by the media after the death of Sushant Singh Rajput which revealed an angle of drug abuse in the society.

Majority of the drug addicts are the young teenagers or young people who out of some or the other reason tend to involve themselves in these bad practices. Either due to mental illness, depression or emotional struggles , people become inclined to these bad practices which affects their health in such a way that it becomes impossible for them to get back to their normal lives. The government has taken various steps to promote campaigns against drug abuse especially in schools and colleges as these age groups generally tend to get attracted to the wrongs. There has been continuous practices to stop illicit trafficking and restrictions imposed on drug trade. People are heavily penalised for trading these harmful substances illegally. There are helpline numbers available on the internet, rehabilitation camps for the addicts and many more such things. It is not only the duty of the government but also our duty as individuals to spread awareness among people and guide other individuals who are in need. Let’s all come together and “SAY NO TO DRUGS ABUSE AND ILLICIT TRAFFICKING”.

11 months ago by Deepak

Is It Necessary To Rest To Maintain My Mental Health?

When it comes to drugs !