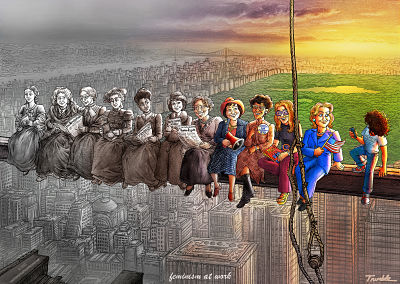 What is beauty? According to the Cambridge Dictionary of English: beauty is “the quality of being pleasing, especially to look at, or someone or something that gives great pleasure, especially when you look at it. Therefore, beauty is as subjective as the eyes that look, and the variety of beauties is as wide as individuals on this planet. However, there are some “standards” that induce us what beauty is, in every moment of human history. In this article, we are going to see how these standards have changed with time and will try to deconstruct why women are normally obliged to follow certain canons imposed by society.

Not only what should be considered beautiful has developed with decades, but also the way beauty was represented to the world. Sculptures, pictures, and engravings were substituted by photos, posters, or public appearances, as we became a digitized society, where Instagram, Tik Tok, or other social media have defeated magazines or art.

At the beginning of the 20th century, women of the “Belle Epoque” were seen using tight corsets that made them look very thing around the waist while cutting their breathing. A very different idea of beauty was represented by artists in Ancient Greek, where women wore loose-fitting clothes made up of long white fabrics. Old greek women were usually portrayed showing their curves and edges, with realistic features and proportions. Afterward, women with bigger bodies represented a high position in society, as those who were well-nourished meant that they came from wealthy families.

During the Renaissance, the well-balanced proportions, as in the classic era, were a symbol of beauty; other features such as pale skin, which meant also a high position in society, long blonde hair, and rounded hips and stomachs were considered as delicate and elegant. Artists from this epoque were obsessed with showing perfection, therefore nudity was usually a great theme for their paintings and sculptures. One of the most popular representatives of art in the Rennaisance was the well-known Leonardo Da Vinci, who influenced by Pitagoras, highlighted the importance of proportion and harmony in beauty.

The modern era was marked by a mixture of classic beauty and a more artificial perspective, for example during the Baroque period. Aesthetics became somewhat more refined, exaggerated, and even attached great importance to the physical appearance of the person. It could be said that a certain taste for ornate was determined, aspects that were mainly reflected in the art of this period. Moreover, it was in this epoque when many illustrated and idealistic philosophers or intellectuals reconsidered the idea of beauty, offering a more profound introspective. An example of it was Kant who stated that aesthetic judgment is made under subjective concepts, therefore there cannot be any objective rule that determines, by concepts, what is beautiful. He reflected that beauty is an intermediary between the sensible and the intelligible.

It wasn't until the 20th century when the beauty standards changed more often and had a bigger impact on women's daily lives as publicity and marketing made a step into the commercial world. At the beginning of the century, women continued with the modern beauty canons, such as small waists which were very defined thanks to the use of corsets. Up to this point, women used unaffordable clothes and hairstyles that made their day-to-day life very difficult. It wasn't until the 1920s that esthetics fully changed; androgens and masculine bodies were at the top of fashion. Short hair and more comfortable clothes started to be seen among women after the First World War. The incorporation of women into work and their appearance in social and academic areas also contributed to the change of beauty standards.

The ideal of a more masculine and free beauty was kept until the decade of the 40s when women were sexualized again, showing bigger hips and busts. An example of this canon was the famous Marilyn Monroe, who made a big impact on society. Throughout the years, different body types, shapes, proportions, and standards were changing every few years, giving women the opportunity to free themselves of the chains marked by men all along history. Women dressed in order to feel good and feel comfortable. Clothes defined ideas and how one wanted to be seen, but they didn’t necessarily follow a social class statement.

Little by little the women gained their place in political, professional, academic, scientific, and many other camps that have been always managed by men. The ideals of beauty and the role of women as an object that must be precious and delicate to show feminity and elegance fell apart. In the 21st century, women occupy an important position in all spheres of life. She is her own boss and doesn't need men to tell her how to dress, behave or live. Nowadays, women have the right to decide for themselves, as an achievement earned by their hard work and struggle. Even though, beauty ideals continue to be imposed on women empowering the idea of a disconsolate body image and pushing many kinds of disorders and insecurities.

If something is for sure, is that beauty standards are changing all the time everywhere in the world and that any kind of ideal of women is just that, an ideal. We are not supposed to look any different than we are, and subjectivity and variety expand in any matter of life. As beauty is not any kind of immortal medicine to keep us alive, we shouldn’t let it guide our decisions or emotions.