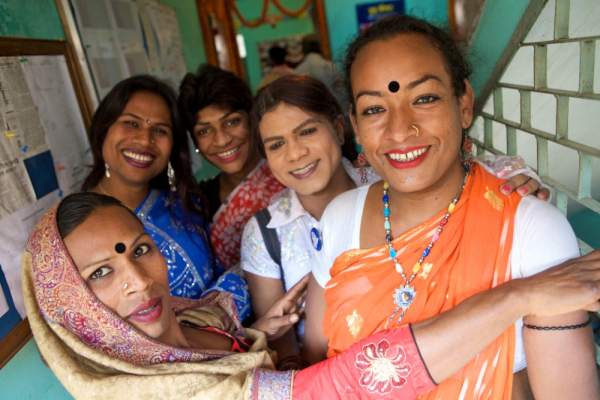 When an Indian family has a new baby, they ask hijra to bestow their blessings on the infant, as their blessings bring fertility, prosperity, and long life to the new baby's parents. Even if we encourage our youngsters to look away when a group of hijras walks by, we continue to consider hijras as second-class citizens as they grow up. When a child brings up a topic such as a gender identity or sexual orientation, their voice is stifled. Anything "deviant" or outside of typical cis-heteronormativity is frowned upon, and we're taught that it's shameful. Anxious queer individuals who feel ashamed of their sexual orientation grow up with this mentality, as do adults who bully others for engaging in "queer behaviour."

Approximately one-third of the population in India, Pakistan, Bangladesh, and Nepal identify as hijras or another gender nonconforming. Biological, gendered, and sexual identities coexist harmoniously in the hijra identity because of religion and a close-knit social structure. Intersex persons and transgender women are not all hijras; some (but not all) people born with a male gender identity may or may not undergo castration and other alterations like breast implants.

Indian society's treatment of hijras is distinct from other countries' treatment of transgender and intersex people. They are deified in Hindu mythology and reviled by British colonialists. Consequently, they are now adored as demi goddesses by some and despised as terrible karma victims by others. They were shunned for more than a century, almost to the verge of extinction.

People that identify as eunuchs, intersex, or transgender are included in the Hijra community. They revere Bahuchara Mata, a Hindu goddess of fertility and virginity. Most hijra men, but not all, prefer to have their male genitalia removed at a ritual known as "nirvana" in honour of their deity. A hijra's genuine identity is multifaceted and distinct to each individual, and the community as a whole is dynamic with hundreds of people who express themselves in countless ways. Hijras in India prefer the name Kinner/Kinnar, which refers to mythological figures known for their musical prowess.

This sect works in a methodical manner, keeping itself isolated from the rest of society and teaching lessons to its young members in secret. Each group has a guru, and the rest of the hijras are his or her students or chela, as the case may be. Disciples learn about the "hijra ways of life" through living with other hijras in a communal setting away from their families. Hijras are frequently mistaken for transgender individuals and referred to as such; nevertheless, these two names relate to a distinct group of people scientifically. People with different identities and spiritual and cultural values, such as hijras, are all a part of the same community. The term "transgender" refers to those whose gender identity differs from the sex given to them at birth; they are members of the community but do not speak for the entire community when they say they are transgender.

The community has been in the Indian subcontinent from the dawn of civilization, according to both history and culture. The Hindu sacred book The Mahabharata discusses hijra. Shikhandi, a mythological figure who was neither male nor female, is well-known in Indian mythology. When Arjuna declined to have intercourse with Urvashi in one version of the Mahabharata, she cursed him to be the third gender and made him the third Pandava. In a narrative from the Padma Purana, Arjuna becomes a woman in order to participate in Krishna's mystical dance, which is only open to women. Arjuna changes into a woman. Khwaja Siras, also known as Hijra figures, played an important role in Indian Mughal history as well. Known for their fidelity to the king, they served as the harem's sexless watchdogs. During the Mughal era in India, from the 16th to the 19th century, they held significant positions in the court and many aspects of government. The Hijra group serves as a reminder of India's rich sexual diversity, which is all too frequently overlooked.

After years of admiration and respect for the hijra community in our history, why are we now filled with contempt and a mix of anger, dread, laughter, and strange feelings when confronted with the hijra community? Because of the Criminal Tribes Act of 1871, which criminalized hijras during the British Raj, the law was written to exterminate the whole group. Although these laws were in place before India gained independence, they were repealed by the country's government afterwards, and by 2014, all three countries have legally recognized third-gender people as citizens deserving of equal rights. Despite the glacial pace of change, Raigarh's first hijra mayor, Madhu Kinnar, was elected in 2015.

There's still work to be done. The regrettable truth is that legal recognition frequently comes before popular acceptability in any social movement. Although the hijra community now has some legal rights, it is nevertheless subjected to hostility because of prejudice, exploitation, and violence. Those who oppose the new legal safeguards argue that the laws are void of meaning and discriminatory in nature. Because Bangladeshi law does not define hijra, officials must rely on their own, often skewed, personal understandings to fill in the gaps. Bangladeshi hijras must submit to humiliating medical exams as a condition of being considered for government employment.

Human rights groups report widespread discrimination against members of South Asia's hijra population. Hijras are forced to live in groups due to the discrimination they endure, and they must rely on begging or sex work to make ends meet. However, despite the existence of legal safeguards, regular employment opportunities are still unavailable.

Mainstream prejudice of the hijra minority and the LGBTQ+ community is a legacy of colonial control, no matter how you slice it. Sadly, racism and intolerance have existed for a long time in some form or another throughout history. But it's only now that the general public has come to embrace it. the 1871 Criminal Tribes Act was repealed nearly 80 years ago, but its effects can still be seen today in India, including in anti-discrimination laws and how society treats communities that were formerly marginalized as a result of the act.

To varying degrees, South Asian societies have made enormous collective efforts to shake off the shackles of colonialism. However, the way our culture treats hijra people as a whole is a colonial heritage that far too many people are unwilling to change. It's not enough to merely remove colonial-era laws when it comes to decolonizing. The Criminal Tribes Act was repealed by India following independence in 1949. In our societal fabric as well as subsequent laws, such as the Habitual Offenders Act that continues to facilitate unjust persecution of gender-nonconforming people, that act's legacy persists.

Many people believe that amending colonial-era laws only gets us halfway to decolonizing the world. To be rid of the colonial psyche is the broader meaning. It's equally as crucial — if not more so — to decolonize our thinking. This includes how we handle hijras, gender nonconformists, and other members of the LGBTQ+ community.

People of colour around the world, including those in our community, have been compelled to conform to Western colonial conceptions about gender and sexuality. Postcolonial society may exist, but it is not yet decolonized. The sad legacy endures and will do so until our culture is fully decolonized. In addition to creating a more equal and just society, decolonizing gender is a key step in reclaiming a piece of our culture that has been all but erased from our memory.

Despite society's reverence for the hijra group and invitations to religious and spiritual rites like births and weddings, members of the community are nonetheless subjected to abuse and prejudice. Community violence and hate crimes are on the rise. They are denied an education, employment possibilities, and restaurant seating, among other things, leaving them to struggle to make ends meet. To make ends meet, they frequently turn to beggars and prostitution. The government has attempted to solve this issue by introducing bills to protect the hijra community, with prison sentences and other punishments for those who offend them, but the societal stigma against the community has little to no effect on the lessening of them.

When it comes to LGBTQ+ rights, the hijra community in India is lumped in with the rest of the LGBTQ+ population. When we fight for the rights of the LGBTQ+ community, we are fighting for the entire community, including hijras who have been subjected to violence, hate crimes, and general contempt. Despite being part of the LGBTQ+ community, hijras have a distinct subculture themselves. It's well worth the time and effort to learn about them, to do research on them, to become friends with them, and to smile at them since they're just like us and are full of blessings.