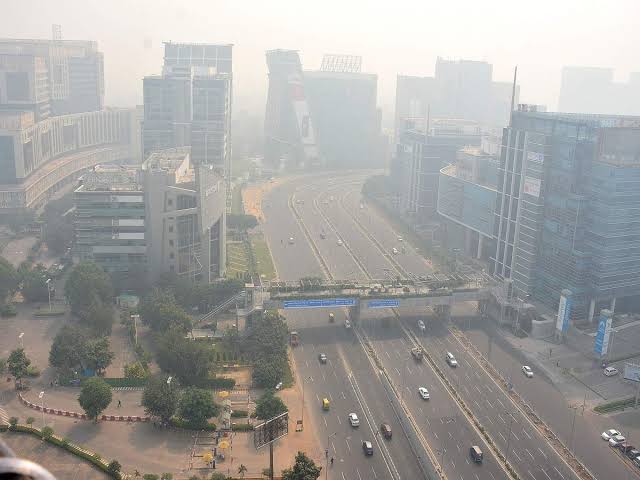 The Haryana State Pollution Control Board (HSPCB) emphasizes that it has devised a clean air program for the millennium city to combat rising levels of air pollution.

The city's bad air quality is attributed to a huge number of diesel generator sets, polluting cars, and the degradation of the Aravalli range.

Haryana's Gurugram is commonly referred to as India's millennial city. Behind the glitz and glam, however, is a sickly populace. The city's rising levels of air pollution have become a severe health hazard.

Cities in India dominate the list of the world's most polluted cities, and there has been an effort to combat this in recent years. The central and state governments have also been criticized by the courts for doing nothing to address the issue. The central government recently launched a National Clean Air Plan (NCAP) to address this and approach it as a national issue.

"We have measures in the proposed clean air strategy for Gurugram to reduce pollution from construction activity and road dust." Furthermore, we have established guidelines to regulate industrial emissions, biomass burning, and any other type of pollution." The HSPCB's regional officer, Kuldeep Singh

Due to the presence of offices of many large national and international firms in Gurugram, there is a significant volume of automobile traffic in a limited radius, resulting in high levels of air pollution. It is also home to over 300 large and small businesses that frequently break air pollution regulations. The region's huge construction activity exacerbates the dust problem.

Gurugram's air quality is being affected by diesel generators. Another issue is the widespread usage of diesel-generating sets. Thousands of residential apartments, in addition to commercial malls, marketplaces, and offices, rely on diesel generators.

"There are dozens of societies (residential flats) in Gurugram that are without electricity. When I mention society, I'm not referring to a group of 20 or 30 households. There is no society with fewer than 200 dwellings. Generators (diesel) run 24 hours a day, 7 days a week in these residences. "The pollution it causes is a major problem for everyone," RTI activist HarinderDhingra said.

It is the situation because, in some societies, the builders have not met all of the standards, as a result of which the builder has not received a completion certificate, without which the society does not have an energy connection and relies solely on diesel generators for power.

The Environment Pollution (Prevention and Control) Authority (EPCA) has issued instructions that a generator ban would be imposed in Haryana from 15 October, however, the state administration has stated that the ban will only be implemented if air quality falls into the "extremely poor" and "severe" categories.

So, especially with Diwali approaching, it will be interesting to observe how effective the restriction is implemented.

Environmentalists claim that enormous residential and commercial buildings have obliterated the city's green cover. They claim that, while politicians remain in denial, a few citizen groups are working to restore and safeguard the town's flora. The devastation of the Aravalli hills by illegal miners is their greatest concern, as it gives some protection to the millennium city and surrounding territories from the Thar desert's dry winds. They are concerned that if this last barrier breaks, the city's air pollution would worsen.

The Aravalli covers more than 56,000 acres across Gurugram, Faridabad, and Delhi. A vast green lung acts as a massive continent with good forest cover and millions of trees.

The Aravalli is particularly significant because it serves as a de-sandification barrier for the entire Delhi-NCR region.