Harlem through the lens of the 2022 Oscar winning documentary “Summers of Soul”. What is the history of this Black American landmark? 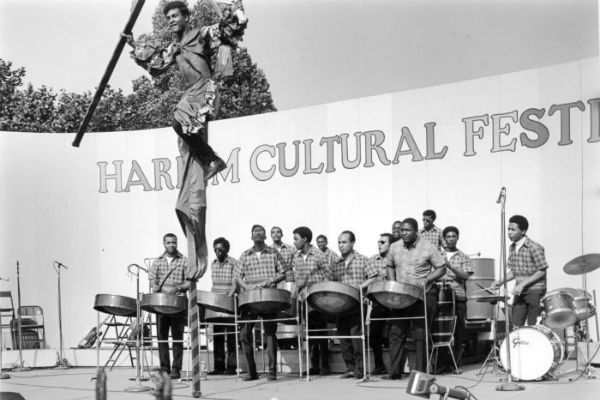 On the 27th of March 2022 “Summers of Soul”, a documentary directed by Ahmir Questlove Thompson, American musician, won the Oscar for “Best Documentary”.

It revives a series of footage shot between 1969 and the mid-70s in Harlem, Manhattan where the homonymous cultural event took place.

The Harlem Cultural Festival is a series of cultural events, music concerts and entertainment fairs held in Harlem, Manhattan, NYC for several years from 1969 to 1974.

As a celebration of the black community in NYC, it carries a thick political value, apart from the statement of a culture that has been suppressed and maintained by hegemonic American superstructure.

Many famous singers also attended the festival: Nina Simon, Bibi King, Stevie Wonder and Mahalia Jackson, to name a few.  Footage of the festival, containing nearly 40 hours of its numerous versions, has been kept in a basement for almost half a century where they were unpublished.

The director of several footage of then-TV producer Hal Tulchin tried to broadcast the extract but little of his huge archive of the festival made it.  He recorded at the request of Tony Lawrence, the festival organizer and host, but so far there has been little luck following those footages.

It is pertinent to reflect on the reasons why this festival is often referred to as “Black Woodstock”, which has so far not had a chance to gain worldwide fame.

A worthy documentary realizing after half a century has finally given way to the availability of this cultural event: recognition and self-identity, but it is important to question why this has not happened before.

As Questlove, Summers of Soul’s director, points out, the victory of the documentary at the Oscar Awards is not to be cheered just upon its singular value as a cinematic reward. Yet it demonstrates the long-awaited recognition for Black culture to be welcomed and not parted from the American culture.

The director and executive producer claims on stage that this victory is not about him, but “about marginalized people in Harlem that needed to heal from pain”.

Harlem is a famous neighbourhood in Upper Manhattan that has always been a place of racial encounters and change. It was inhabited mainly by Italians and Jews in the 19th century and it saw a huge migration of blacks in the 20th century following the so-called Great Migration. Many immigrants came to Manhattan and especially to Harlem to find a new life solution and to escape from the Jim Crow-controlled south where lynching and heavy violent repression against the Black community is still going on.

After WWI, the surrounding area survived a period of cultural flourishing with the Harlem Renaissance that brought unprecedented American black culture to the New Negro movement. Many black artists from around the state arrived in Harlem, which began to become an impressive landmark for the recognition of black art and culture, as had never happened before in the state.

Unfortunately, the Great Depression ended this artistic expansion in the area and many residents became unemployed or left the neighbourhood if possible. World War II helped implement the fall into poverty in Harlem where crime rates and violence began to rise. The zone’s schools and infrastructure were officially cut off and its reputation began to crumble.

Despite being a fruitful center of culture and an important reference point for black culture, it has largely been silenced over time, largely by the media’s focus on the damage to area security, rather than reflecting why it happened and its causes. It underwent a process of permanent isolation from other parts of Manhattan.

In the early 00s, real estate companies and entrepreneurs started a process of gentrification in the area, which is equal to a “requalification” of the neighbourhood with a relevant rise in rents and sales. This resulted in a demographic shift in the area as the affordability of housing skyrocketed: this contributed to the dispersion of the cultural heritage Harlem has as a dwelling of Black American culture.

Questlove, director of Summers of Soul, mentioned this while presenting the award to the Harlem Black American community. It has long been silenced and suppressed by government action and a capital-driven housing market that has been able to overtake Harlem as a landmark of a black community, not just for Manhattan, but for the entire United States.

According to the documentary director, winning the Summers of Soul Oscar award means more than just acknowledging the documentary. This means embracing and welcoming black culture as part of American culture and recognizing the value of the Harlem festival as a celebration of the country’s culture, not just as a community event that separates itself from the country’s identity.