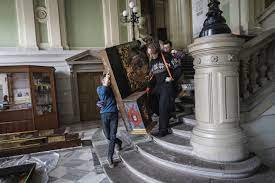 Every aspect of society is changing, evolving, even freezing at certain and critical times in history, so it is doing in Ukraine, where last month, Putin’s aggression made some unexpected reality.  Today the focus of this article is on what is not said by the mainstream media which, in fairness, seeks to keep track with every step of Russian progress and try to counter the Ukrainian resistance, or at least.

In various moments of crisis of history, the industry has always had to hide and protect itself from the threat of armed conflict.  For example, Nazi bombings throughout Europe during World War II represented a threat to the cultural heritage of many countries, and museum directors and curators had to find ways to protect their works from destruction.  On a sad note, many artefacts were stolen and looted during the war: often during the Jewish persecution, the Nazis confiscated thousands of artefacts from Jewish families, rarely returning to the survivors of the global conflict.  War touches all levels of society and often breaks down almost every part of it one by one: art, the “untouchables”, is seldom a liberated victim.

So, what is happening in Kyiv and all the cultural places around Ukraine, such as museums, galleries, etc.?

The Russian invasion was followed by an extremely rapid increase, and many Ukrainians did not expect their lives to change so much in such a short time.  Many Ukrainians, fortunately, responded by packing their bags and fleeing, with many deciding to stay in their hometowns and resisting with courage.  Yet, now in a runaway and endangered environment like Ukraine, every aspect of society and governance has not had a chance to be fully reflected;  It’s all happening very fast.

Ukraine is home to many museums and cultural sites, and they have all been under threat since Putin invaded the country’s borders.

The Maidan Museum is a museum in Kiev that was established in 2014 after the Maidan Revolution.  It is the result of social upheaval and dynamism, and it tells the story of many Ukrainians who revolted against President Yanukovych who wanted to build strong ties with Russia and scrap the EU agreement.  The revolution resulted in the overthrow of the President and the overthrow of the government by the people who decided to build a new democracy with various government representatives following the so-called “dignity revolution / Maidan revolution”.  The museum, as it appears on its website, is responsible for preserving the memory of revolutionary events and, as an educational objective, it is responsible for educating the younger generation about how Ukraine achieved its long-awaited independence.

Meanwhile, history has taken a different turn in its most general sense and the Maidan Museum, as well as the willingness to represent Ukraine as a sovereign country, is now at risk.  Museums, galleries, artefacts are at risk, and the director of the Maidan Museum, Ihor Poshyvailo, confirmed in an interview that measures were planned to be taken in pre-war situations, but the increase in attacks has broken them and is now an issue.  Not just the Maidan Museum, but all the museums in the country are competing against the times to decide where and how to preserve the works of art.  Transferring artworks from one place to another usually takes a long time in a bureaucratic manner, and it goes without saying that any transfer must first be approved by the government;  It also takes time, and a few weeks ago no one thought of such a changeable and dramatic situation to prepare everything at the right time.  There are many museums in Ukraine: the National Museum of the History of Ukraine during World War II, the Odessa National Museum of Fine Arts, the above-mentioned Maidan Museum, the Ukrainian State Museum, a few more, and they are all currently struggling to preserve the works.  From bombings without much caution, considering the speed with which the war has evolved.  It is difficult for directors and curators to find safe ways to move and hide artwork, and some have already been damaged.  For example, the local history museum in Ivankov, near the capital, was bombed and many works by the famous Ukrainian artist Maria Primachenko were destroyed – a symbolic act of destruction strongly linked to the demolition attempt.  The identity of a nation.  What is the industry if the country’s heritage is not represented?

In a statement dated February 24, 2022, ICOM issued a message to the directors and curators of the International Council of Museums, Ukrainian Museums, and after condemning the conflict and requesting a ceasefire, it appealed to the 1954 Hague Convention to ensure the protection of Ukraine’s cultural heritage.  To protect cultural property in the event of an armed conflict in order to exercise all legal obligations involved.  It is interesting to highlight that in this statement, ICOM also appealed to all members of civil society, whenever possible, to take action and try to preserve the buildings of art and culture, as they serve as the basic symbol of education.  , Identity and sovereignty of one’s own country and local community.

Russia is also part of the ICOM, which includes museums from many countries around the world and is affiliated with UNESCO.  Therefore, it has been appealed not to target the places of cultural heritage of the country.  Nevertheless, such restrictions are often ignored during wartime, and the attack on the Ivankov Museum is merely a demonstration of that.

Ukraine is trying its best to preserve its cultural heritage by hiding artefacts in the basement or sending them to another country, but scheduling is crucial, and this mission is as risky;  The security of the Ukrainian people undoubtedly comes first.  Another factor that is adding is the lack of material needed to transmit and protect the patterns.  Stefan Pavlovich Petrovich, director of the Lviv Museum of Ethnography, Arts and Crafts, said metal panels were hung on the building’s exterior windows to protect them from bullets, but they could do just that;  Resources were missing because such intense riots were not expected.