How Globalisation has created a borderless world. 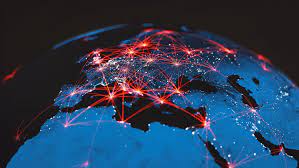 Globalization. Doesn’t this word conjure up images of a global society with no borders, no hurdles, and no restrictions?

Globalization can be defined as the gradual process of economic and social integration brought about by new technologies and economic relationships, as well as national and international policies involving a diverse range of factors, including governments, international organizations, business, labour, and civil society. Trade and long-term direct foreign investment by multinationals, as well as the flow of short-term portfolio capital, are seen as examples of globalization. As a result, globalization allows the flow of products and services across seamless geographical borders, not to mention capital and information. Because of globalization, production, purchasing, investing, and saving are no longer restricted to national borders, but have expanded to a worldwide scale. Globalization has warped the previously existing economic divisions between countries, resulting in a borderless society in which economic decisions are made without respect for national borders.

Globalization began in an ancient form when we first settled in different parts of the world; however, it has made steady and rapid progress in recent years and has evolved into an international dynamic that has increased in speed and scale as a result of technological advancements, affecting and engaging countries on all five continents.

National borders have become economically insignificant as a result of globalization. It has created a world in which financial capital, manufacturing operations, and labour force can be relocated to new regions with higher prospects. Recently, there has been a tremendous increase in the degree of international economic activity, which has been fueled by a variety of factors ranging from information technology advancements to national government efforts to liberalize and deregulate markets. This has led to a significant increase in global trade, investment in overseas businesses, and money movements. As a result, increased public awareness and increased international economic activity demonstrate the strengthening of economic linkages between countries. This trend can be seen in countries like the United States, which is now more open than it was 25 years ago.

National economies are linked by their participation in the trade of goods and services, as well as cross-border financial asset flows and labour migration. International economic integration can be defined as a process that involves the removal of barriers between national economies, resulting in stronger ties. Previously, integration was associated with specific government activities such as eliminating tariffs and other artificial barriers to the free flow of products, services, and inputs. Advances in communication and information technologies, on the other hand, have aided economic integration by increasing awareness of and access to overseas consumers and producers. It is desirable to use one of the usual ways for assessing an economy's strength concerning its ties with the rest of the world, which entails calculating its percentage of economic activity that includes exchanges with other countries. If the percentage is high, the country has an open economy, which means it is more connected to the global economy.

Globalization also forces firms to adopt new tactics based on new ideological trends that attempt to balance the rights and interests of individuals, communities, and countries as a whole. This move allows businesses to compete on a global scale while simultaneously signaling a significant shift for business leaders, labor, and management by allowing workers and the government to genuinely participate in the development and implementation of company policies and plans. It causes restructuring on a global, national, and subnational scale. It entails, among other things, reorganization of manufacturing, international trade, and financial market integration between countries. At the global level, this has an impact on capitalist economic and social connections via multilateralism and microeconomic phenomena such as company competitiveness. The class structure, the labor process, the application of technology, and the structure and organization of capital are all affected by the change of production systems.

Apart from the integration of other countries, some economists believe that the net benefits of globalization on economic growth within a country are also very favorable. Several studies have attempted to evaluate the influence of globalization on various nations' economies using variables such as trade, capital flows, and openness, GDP per capita, foreign direct investment (FDI), and other factors over the years. Using time-series cross-sectional data on trade, FDI, and portfolio investment, these studies looked at the effects of many aspects of globalization on growth. Even though they examine the effects of many aspects of globalization on economic growth, some of the findings are unclear or even conflicting. Overall, however, the findings of those research appear to support the economists' positive attitude rather than the public and non-economist viewpoint.

The utilization of comparative advantage to encourage commerce among nations boosts growth, as evidenced by a high association between openness to trade flows and the influence on economic growth and performance. Furthermore, capital flows and their impact on economic growth have a strong positive relationship. The impact of foreign direct investment on economic growth has resulted in better growth rates in wealthy countries all across the world, as well as an increase in trade and FDI. Empirical research employing time series and cross-sectional data on trade, FDI, and portfolio investment indicated that a country has a lower degree of globalization if it generates more money through trade taxes. Further data suggest that insufficiently wealthy countries, as most developed countries are, there is a positive growth effect.

One of the most significant potential benefits of globalization is the ability to reduce macroeconomic volatility in output and consumption through risk diversification. The total evidence of the globalization effect on macroeconomic output volatility reveals that, while direct effects in theoretical models are uncertain, financial integration aids in the diversification of a nation's production base and contributes to an increase in production specialization. However, based on the principle of comparative advantage, the specialization of production can lead to increased instability in specific industries within a nation's economy and society. As time goes on, successful firms, regardless of size, will surely be a part of the global economy.