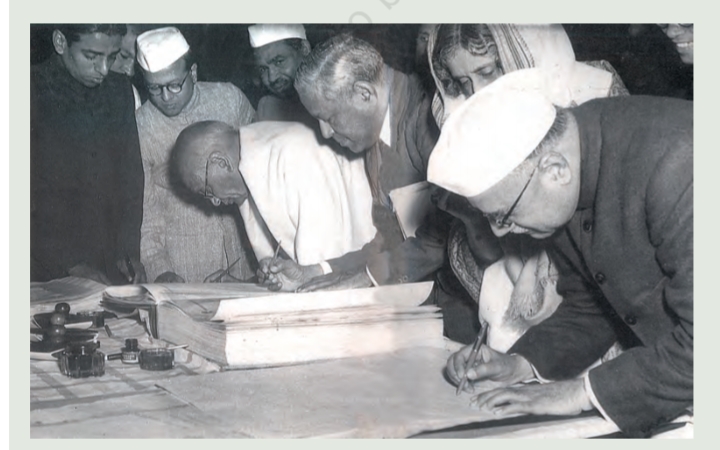 India is a constitutional democracy. Establishing that Constitution is the document from which all the different laws of land derive their authority. Hence it's appropriate to know the history of the making of our constitution and how it becomes the way it is now thoroughly.

On January 26, 1950, the Indian constitution came into effect. Indian constitution is the bulkiest one, India's size and diversity perfectly explain the length of our constitution. In order to be fit for the whole Indian constitution needs to be protecting the rights of all minorities whether it is caste-based or linguistic or social status. It took 3 years to draft our constitution, from December 1946 to December 1949, as it was discussed at great lengths clause by clause in Constituent Assembly. Our constitution had originally 395 Articles in 22 Parts and 12 Schedules. Constituent Assembly did all this work of drafting the constitution under the Presidency of Rajendra Prasad. On 15th August 1947, India got its freedom, the moment finally came after years of struggle but along with it comes new problems of deep political and ideological division that exists in India between Nawabs & Rajas. When India got freedom they were hoping for a completely different kingdom/country of their own. It was one heck of a task to unite them and to prevent multiple partitions of newly Independent India.

After enduring years of suffering and mayhem under the British Raj, it was of great necessity to provide Indians with the hope of a Secular India, free from discrimination, where everyone will be equal in the eyes of law, no privileges or special rights for anyone. This task was bestowed on our Constituent Assembly and they not only accomplished their objective but after many endeavors leaders like Sardar Vallabhbhai Patel successfully unite all princely states into one nation, India.

In the winters of 1945-46, provincial elections were held in India. The provincial legislatures then chose the representatives of the constituent Assembly. 82% of members of Congress are also the members of Constituent Assembly. Muslim League major political party boycott Constituent Assembly claiming it was Congress dominated and remain adamant about demanding a separate constitution for Pakistan and a partition. In total, Constitution Assembly had 300 members, Out of which important ones were: Jawaharlal Nehru, Vallabhbhai Patel, Rajendra Prasad, B.R. Ambedkar.

Jawaharlal Nehru passed the important "Objective Resolution". It was the momentous resolution that outlined the defining ideals of Independent India and provided the framework within which the work of constitution-making proceed. India was proclaimed as "Sovereign Republic Independent" which guaranteed its citizens justice, equality, and freedom. Jawaharlal Nehru also passed the National flag, "horizontal tricolor of Saffron, White and dark green in equal portion" design.

Although, B.R. Ambedkar, a lawyer, and economist, had always been a political opponent of Congress on the advice of Mahatma Gandhi he decided to help the Constituent Assembly in making of Constitution. He was the chairman of the Drafting Committee of the Constitution.

Two other lawyers who Played a vital role were: KM Munshi from Gujarat, Alladi Krishnaswamy Aiyar from Madras. Both of them gave crucial inputs in the drafting of the Indian Constitution. The other chief Draftsman was S.N. Mukherjee who can put complex proposals in clear language. In order to create a sense of collective participation, the public was asked to send their opinion on their issues and other concerns.  Everything was taken into consideration and discussed. For instance What language should Indians speak? political and economic system nation would follow? What moral values its citizen should uphold or disavow?

Making of Constitution was an extremely long process but also interesting as well. Patel on the other hand worked behind the scenes, playing an important role in drafting key reports, reconciling opposition views. In total, eleven sessions were held by Assembly, with sitting over 165 days. In between the session, the work of redefining the drafts was carried out by various Committees and Subcommittees.