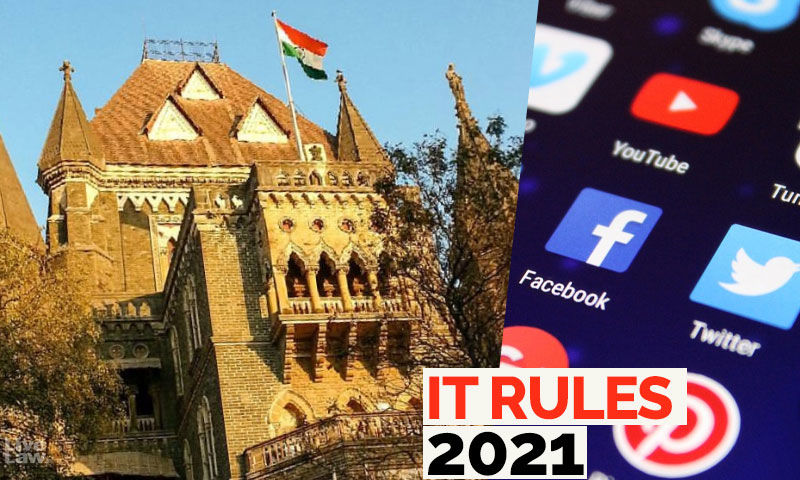 The Bombay High Court issued a stay of execution on Saturday for sections of the Information Technology Rules, 2021, which require all online publishers to follow a "code of ethics" and conduct.

Justice Dipankar Datta and Justice G S Kulkarni halted the Information Technology (Intermediary Guidelines and Digital Media Ethics Code) Rules, 2021. On the surface, the high court decided that these sub-clauses violated the petitioners' primary right to freedom of expression under Article 19. It further stated that nine clauses beyond the scope of substantive law, (the Information Technology Act of 2000).

The judgment came after petitions from The Leaflet and writer Nikhil Wagle, who argued that several parts of the new IT Rules were unclear and would "chill" a citizen's fundamental right to free expression. "Reasonable restrictions" on freedom of speech and expression are authorized under Article 19 (2) of the Constitution according to the petitioners. The HC rejected to stay article 14, which establishes an inter-ministerial committee, to monitor online content and address complaints and breaches, and also clause 16, which prohibits online content in an emergency. Because no such committee had yet been formed, the court recognized no basis to suspend sections 14 and 16. The HC also did not stay clause nine sub-paragraph (2), which provides for action if any existing legislation, is violated.

The petitioners sought a temporary delay in the implementation of the revised IT Rules pending the court's decision. To regulate online publications' ethics and content, the Leaflet's senior counsel, Darius Khambata, argued that the new IT Rules, were outside the Union's rule-making power. It also questioned why the new IT Rules 2021 were being published without updating the existing IT Rules 2009. The Union government's Additional Solicitor General Anil Singh defended the need by citing the Press Council of India's (PCI) existing code of conduct for journalists.

The PCI standards and the Cable TV code, he claims, will be mandatory for digital media under the new legislation. They highlighted that the PCI regulations were more like guidelines, with no firm penalties for breaches. ASG Singh said additional rules were required to prevent the spread of fake news and illegal material online.

"Article 14 is not urgent because the Committee has not yet been established. The oversight committee did not influence these cases. Encourage petitioners to come asap ", the court ruled.

It also directed the Union government to reply to the petitioners' concerns in three weeks. The petitions will be heard again on September 27. In a democracy, dissent is required. “But it is checks and balances that make democracy work. Without a doubt, a good democracy grows through criticism and acceptance of competing perspectives. In a democracy, criticism strengthens acceptance.”

So long as the rules are followed, a news organization can be fined even if its content falls within the limits of reasonable limitations set out in Article 19(2) of the Constitution.

“The indeterminate and wide phrasing of the Rules chills the freedom of writers/editors/publishers to free speech and expression,” it said. “The 2021 Rules are thus illogical and go beyond the IT Act's aims and requirements”, the High Court added.

According to the Press Council, and the Cable TV Network (Regulation) Act, publishers of news and current affairs material and online curated content are liable to action under the legislative frameworks of the Press Council Act and Cable TV Network (Regulation) Act, which allows for an independent agreement with the petitioner that a subordinate law cannot stop a separate law from violating its powers.