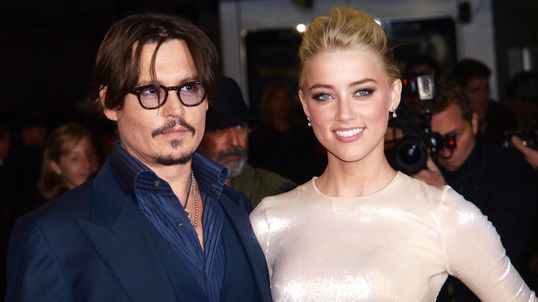 In the light of the current defamation trial between Johnny Depp and his ex wife, Amber Heard, our modern society has started to pay attention to another side of domestic violence: a side in which a female isn’t the obvious victim.

Over the course of three weeks, Depp and Heard’s respective teams have met in Virginia's Fairfax County Courthouse, in USA, set to determine if indeed the Aquaman actress defamed Depp in an article she wrote for The Washington Post in 2018, alleging being a survivor of domestic abuse herself. In the article, Heard never mentioned the actors name, but following its release, Depp lost his working contract in the Pirates of the Caribbean franchise and his role in the Warner Bros film, Fantastic Beasts: The Secrets of Dumbledore.

Depp claims Heard jeopardized his career and that she was the one inflicting physical and verbal abuse towards him, while asking for 50 million dollar retribution during the defamation trial. In response, Heard countersued her former husband for 100 million dollars, claiming that he had defamed her career by suing her.

Whether in team Depp or team Heard, it is safe to mention this dramatic case has polarized the public opinion. Some advocate for Depp’s arguments, others defend the Aquaman actress on her previous stands. No matter in which team you find yourself in, a possibility has arisen in the domestic violence spectrum.

A man can be abused.

A curious statement brought during the #MeToo era.

After the trials and accusations towards Hollywood magnates and renowned actors,, it could be said, under the apparently common understandment of what feminism is and which kind of narrative sells the most, that Johnny Depp is attacking his former partner after his ego, and bank account, got struck after his demolishing loss against the british paper The Sun, that claimed Depp a “wife beater”.

A man facing accusations of being a perpetrator of domestic violence, if done honestly, has proven to have a major social impact nowadays. Make no mistake, there are still countless injustices made toward women and their stories daily. But in spite of this subject starting to receive awareness in real life society and not only through a screen, there’s a fair chance that many women are able to coerce their male partners into staying in an abusive relationship by threatening them with lies that could cost them everything.

And this “everything” could mean material possessions, but also family, friendships, career, pride or health.

Abuse is not only reduced to physical violence. According to the CDC’S Injury Prevention Control, three other types are included in the Intimate Partner Violence section : sexual, stalking and phsychological agression.  And while men are biologically abler to perpetrate the first one towards a woman, this does not exclude the use of the following by a female abuser.

In the United States, according to a study conducted by the same institution, 5 million men admitted to have experienced contact sexual violence, physical violence or stalking. While a positive lense can be used and we may assume it is because no more men have lived these experiences, we have to consider chauvinism as one of the main reasons a man won’t admit to have endured abuse, or perhaps admit it to himself, but refrain from verbalizing it.

Many could refrain from admitting being victims of abuse, even though having substantial physical proof. Can we bother asking if the fate would be the same by pointing to intangible facts? If for “the weak gender” it’s a feat being taken seriously, would it be any different for a man?

It is safe to assume that it’s within the idea that calls the man to be the strong, aggressive, and capable of the both birth genders that we can find the answers to the erosive behaviors of a patriarchal society. On one side, assuming this idea prolongs the perception of a woman as the vulnerable half, as something that has to be protected or something that could be taken advantage of, and on the other we find that, due to the grandeur of his gender, a man is the one responsible of anything related to her, from her life, successes, to her pains.

How bitter it is that the same idea, claimed to benefit the strong, is the one that condemns it to what could be a lifetime of misery.

On a personal note, having witnessed for a large part of my life this sort of behavior, I do remain with the symbolic question lingering in my head, “Why remain in that situation?”. It is difficult for an outsider, even more for a woman who has never been actively in a romantic relationship of this sort, to fully comprehend and acknowledge the reasons behind the victims actions, especially due to being distressed by the picture.

We still have yet to wait for the resolution of this feud between Depp and Heard, but we can admit to ourselves that if the actor’s team is able to convince the jury proving his side of the story as the one closer to the truth, then Depp would have established a precedent on mass media, enabling a conversation that sooner or later would have come to the surface. The question of how feminism is perceived by the current world would be put to examination similarly: if women must be treated in equality, shouldn’t be they punished through it as well?

It could also be a great lesson to the society of immediacy, quick to retweet and procrastinator of investigation, that everything heard must be dissected.

On the other hand, if Depp is bound to win, a new stigma would arise, focused towards the Borderline Personality Disorder and Histrionic Personality Disorder beholders, as the forensic psychiatrist, Dr. Shannon Curry,  declared that Heard was positive for both. This would be a shame for a topic of relevance, during a time in which mental health has taken its part on social media in recent years, specially during the lockdown periods.

The trial is set to continue for three more weeks, in which we are expecting to see if Amber Heard will stand as a witness, more  revelations about this relationship and what the jury concludes by its end.

9 months, 1 week ago by dsolorzano

Hollywood has finally found an issue in which a man is being abused by a woman, and the response has been lacking. Instead of correcting its mistake of canceling Depp, the industry has refused to acknowledge its mistake and continues to bash on Depp. Hollywood has become hypocritical, and the way the film industry has handled this case shows they care more about facing face than actually caring about victims of abuse.