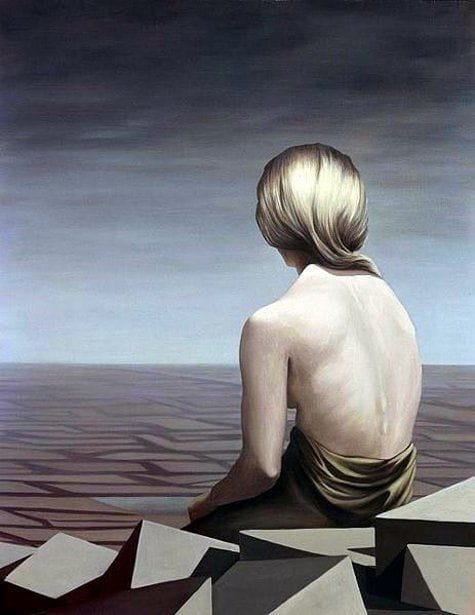 Many women have been forgotten or have faded into the background of the 20th century Surrealist movement. Names such as Salvador Dali (for whose artistic genius people are often willing to overlook the fact that he harbored fascist sympathies and worked closely with Spanish fascists), Rene Magritte, Max Ernst, Joan Miro, Marcel Duchamp, and Andre Breton are instantly recognizable for anybody who has stepped inside a museum. By contrast, one would be hard pressed to come up with a female Surrealist (though Frida Kahlo often seems to be the one shining exception).

One such female painter is Kay Sage, a name that's largely obscure to the public yet formidable for those in the know. In an era where female artists were met with contempt, she was one of the few met with notable success in her field.

Born in 1898, Katherine Linn Sage, most commonly known as Kay Sage, was daughter of wealthy parents Henry M. Sage and Anne Wheeler Sage. Sage’s father, Henry, was both president of the Sage Land and Improvement Company and state senator for ten years (Encyclopedia). Anne Ward married Henry at the young age of eighteen as a means of rectifying financial and social voids in her life. However, in an unprecedented manner for the era, she defied societal norms by manifesting her self-willed nature as a disobedient wife. The juxtaposition of her parents’ two divergent personalities caused Kay Sage to experience a precarious upbringing. This overbearing instability resonates in her artwork; she often depicts architectural structures that are representative of her childhood such as ruins of incomplete buildings and deteriorating scaffolding (see "Democracy Dies in Darkness" below). Her parents pursued separate paths: Anne travelled across Europe in an attempt to avoid what was expected of her as the wife of a powerful businessman and politician, and Kay would frequently accompany her. According to People Pill, Sage's adolescence was marked by her unusual family situation, her extensive travel, and the absence of any stability in her education. These prolonged excursions provided constant exposure to distinct environments which is manifested through her art as she was celebrated for her artistic portrayal of space and landscapes.

Still, for the majority of her early life she remained in Italy and was raised mainly by her mother. She later returned to America in 1919 in order to study at the Corcoran Art School in Washington D.C. During her early adulthood in Italy she received further education in art working individually with a variety of distinct mentors and with a particular emphasis on oil painting. Regardless, Sage considered herself to be a self-taught artist for the way she taught herself how to capture imaginary landscapes through artistic expression as opposed to pre-existing scenes observable through daily life. This is evident through her art as she specialized in depicting fantastical dreamscapes incomparable to anything perceived in reality; an arguably unteachable feat that remains present as a motif in the vast majority of her work. Sage eventually exposed a great fear of tempest, palpable through the eerie atmosphere of her work as she often painted skies that indicate impending storms.

To contextualize, the term “Surrealism” was initially established by French writer Guillaume Apollinaire in 1917. In subsequent years, Apollinaire influenced the creation of two distinct groups founded on Surrealist ideologies led by Yvan Goll and Andre Breton. Both leaders eventually produced manifestoes conceptualizing the Surrealist movement. Breton envisioned the birth of a social revolution based on the awakening of the subconscious in being liberated from cultural oppression. The movement presented both a political and expressive function, as it encouraged freedom of the unconscious mind through creative expression irrespective of societal constructs. The influence of Kay Sage on the Surrealist movement is best understood through the context of gender roles. Being a woman during an era dominated by men, her contribution to the movement is often overlooked in comparison to those of male artists.

According to The Collector, when Andre Breton and Yves Tanguy attended the Paris’ Salon des Independants in 1938, Kay Sage’s paintings attracted their attention and admiration. As her name leaned more towards gender neutrality, and because her paintings were deemed to be of "a male style", they made assumptions about her identity. "This ignorance was a favourable occasion as her gender would later be a somewhat restrictive element regarding her work’s evaluation by the male-dominated art criticism of the time." Upon their meeting, Breton disapproved and held her in contempt, while Tanguy fell in love (their lifelong and later somewhat turbulent  relationship would be a factor in Sage's paintings). Whatever the nature of their relationship, according to Sage herself, they “dislike[d] terribly the idea of being a team.”

According to The Washington Post, Sage and Tanguy were both influenced by metaphysical painter Giorgio de Chirico, but they developed their own distinctive styles. "Sage’s signature canvases lure you into carefully designed, post-apocalyptic visions." Despite the Surrealist circle's disapproval, Kay Sage would always consider herself a surrealist painter. She had a preoccupation with desolation, death, loss of innocence, and enigma. For instance, the year she and Tanguy married, Sage painted “I Have No Shadow.” A narrow, dark passageway opens to two tiny figures standing on an empty horizon, as if plucked from the ether and paired for eternity. Conjuring the expansive, defenseless feeling of a new romance, it’s an austere image, imbued with anxiety and hope. It's vulnerable yet cynical, a quality prevalent in many if not all her paintings as her career became established.

With an understanding of both the limitations of gender imposed upon her by society, and the power behind her family’s wealth, Sage played a fundamental role in establishing a line of communication between Surrealism in New York and Paris. In doing so, she encouraged greater interest in European Surrealists within the United States, contributing majorly to the promotion of these artists in New York. Furthermore, using her family’s extensive financial resources, she greatly contributed to the relocation of various Surrealist artists to the United States. Her efforts resulted in the establishment of The Society for the Preservation of European Culture, which granted artists the opportunity to migrate to New York to exhibit their art as well as lecture others on Surrealist ideology. While impossible to trace the extent of her impact on the movement, it remains highly probable that she influenced its trajectory in having made possible the arrival of the movement’s leader to America. She was undoubtedly integral in the spread of Surrealism across the United States.

Kay can be considered instrumental in developing the movement’s signature qualities. She strayed from the "silliness" or kitsch styles that other artists of the movement succumbed to, being able to maintain her enigma till her death. If the reader researches further, they will find that her end was as desolate as her paintings. Like many Surrealists, she utilized landscape imagery as a metaphor for the mind and psychological states of being. Though often disregarded in historical accounts Kay herself encompassed the Surrealist belief through her art by provoking awareness of the subconscious. She fractured the expectations of Surrealism in avoiding the use of bright colors and figurative expression, instead depicting dull scenery absent of a clear distinction of reality.