Marital rape needs to be criminalized! 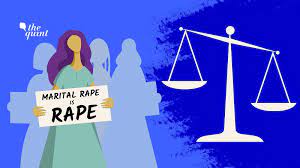 Marital rape is now illegal in 150 countries throughout the world. Until the end of the twentieth century, it was widely assumed that marriage gave a man the right to have sex with his wife whenever he pleased, but as society progressed, this was called into doubt. The anti-rape movement was started by feminists all around the world to help women have autonomy over their bodies. This was written into the constitution in three ways.

The conventional (erroneous) logic for not criminalizing marital rape is that marriage aims to develop a bond between a couple to reproduce, which necessitates the use of sex. The word rape (Latin: rapere) means "to steal" or "to seize," but it was used to refer to women during the Middle Ages. Rape is devastating to a woman regardless of the perpetrator's identification, and criminalizing any kind of such horrible conduct is necessary for a healthy society.

To those who are willing to listen, "No means No!"

India has had a history of court rulings in case of marital rape. In the Saroj Rani v. Sudarshan Kumar Chadha case, restitution of conjugal rights mentioned in Section 9 of the Hindu Marriage Act was upheld. Earlier it was ruled violative of the fundamental right to privacy in the T Saritha case. The Chhattisgarh High Court said that "Sexual intercourse or any sexual act by husband with his wife would not constitute rape even if it was by force against her wish." This case was about a complaint in which the wife claimed that her husband had 'unnatural sex' with her. The court relied on an exception outlined in Section 375 of the Indian Penal Code to reach its judgment. It asserts that any act of sexual intercourse between a man and his wife, as long as the wife is an adult, is not rape, ignoring the concepts of will and permission. In an affidavit to the Delhi High Court, the Union Government stated that sex within marriage cannot be used as a reason for women to file for divorce. It argued that criminalizing marital rape would destabilize the sacred institution of marriage as if a marriage in which a woman has no say is worth saving. Employing this tactless rationale to hide this patriarchal mindset is cruel and medieval.

The Hypocrisy of Section 376

As a result of years of discrimination, objectification, and subjection of women, Section 376 shows the deep-rooted misogyny in Indian society. This draconian law violates the guarantees of equal protection, freedom of expression, and right to life and liberty of Articles 14 and 21.

In 2018, Supreme Court explicitly said that a woman is not a chattel or property of men, and so every woman has sexual autonomy. Her marital status is inconsequential in this debate. Section 376 should be declared ultra vires as it is contradictory to the heart and soul of the Indian Constitution.

The “Implied Consent” in Marriage

India is one of the 36 countries that have not yet criminalized marital rape. It denotes the archaic belief that women are merely the property of their husbands. Marital rape needs to be 'criminalized' for the laws to keep up with the evolving ethics of society. If a husband can be charged for sexual harassment, molestation, voyeurism, and forced disrobing, then why should rape be excluded from the list? It is also harmful to the psychology of our citizens. They have only two choices in such cases, either to sue the rapist on other charges or not to approach the court at all. Women can file a charge sheet of sexual assault against their husbands under section 498A. Protection of Women from Domestic Violence Act (2005) is the current reprieve for women against forced intercourse by their spouses. The rising rates of marital rape indicate that these measures are ineffective. The doctrine of coverture propagated by Blackpool does not apply in this context. The non-criminalized nature of marital rape in India emanates from the colonization process. We must remove Section 376, just like we scrapped Article 377, again of British origin for a more liberal and progressive society. The British government realized their folly and criminalized marital rape back in 1991. isn't it high time we do the same? Rape is rape, and no label like marriage can ever justify it.