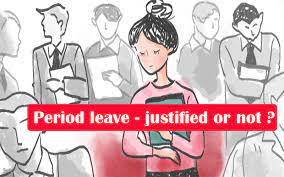 In recent years, India has seen several progressive and regressive changes, with the continuos list expected to grow in the coming days. However, several topics have always been taboo in our society, and one of them is 'Menstruation" It's tough to have an open discussion about it since people appear to get quite uncomfortable about it and prefer to talk about it behind closed doors. Women, should not be blamed because of their biological characteristics. We are certainly moving the patriarchy cycle forward if women must bear their agony in quiet to 'fit in' and avoid being outcasts.

It's crucial to remember that when we talk about workplace equality, we're talking about all working circumstances for men and women, not simply those that can be accepted or rejected based on convenience. Because this is not a choice that women make every month, if someone finds it challenging to be at work due to circumstances beyond their control, they should be permitted to take the leave.

Menstrual leave, a policy that allows women experiencing severe period discomfort to take one or two days off work, is already in place in various nations throughout the world, but it has been widely criticized as ineffective, often reinforcing negative perceptions about female employees.

However, few people use it, citing concerns about sexual harassment or being perceived as weak. Many people wondered if the ability to take three paid days off each month would deter firms from recruiting women in the first place. Since World War II, countries such as Japan, South Korea, Indonesia, and Taiwan have provided paid menstruation leave to female employees.

Different people's bodies react differently to the pain and discomfort of menstruation. Given the challenges and biological complications that women face, they must be given every right to take menstrual leave when they need it.

Menorrhagia, endometriosis, fibroids, and pelvic inflammatory disease are just a few of the medical disorders linked to menstruation to be aware of. While it is true that not all women experience severe pain, it is normal for many to experience physical discomfort during the cycle, which they are expected to bear in the absence of overtly severe symptoms. When there is a lot of physical mobility, the problem becomes even more difficult.

The ‘Menstruation Benefit Bill,' introduced by Ninong Ering, a Member of Parliament from Arunachal Pradesh in the Lok Sabha in 2018, sparked extensive debate over the necessity for a monthly menstruation leave policy for working women. The Menstruation Benefits Bill aims to offer women in the public, and commercial sectors, two days of paid menstrual leave every month, and also improved workplace rest facilities during menstruation.

Female students in government-recognized schools in Class VIII and above will also be eligible for the perks. The bill must address girls and women in all professions and job categories, not just those in white-collar jobs. This bill should be equally beneficial to blue, white, and all types of collar occupations. While discussing the bill, we mustn't narrow our emphasis and focus on simply one group of women, as women of all backgrounds, regardless of the type of work they undertake, menstruate. While white and golden collar positions offer amenities and benefits that blue-collar jobs cannot match, the basic coverage provided by this bill (if and when passed) would be a step in the right direction.

When Culture Machine and, more recently, Zomato announced that their employees, will be given paid period leave, the debate and conversation erupted. It drew a lot of criticism since it was viewed as "women taking advantage of their situation." The menstrual leave declaration was interpreted as an act that would portray women as the "weaker" gender, requiring time to manage their work and compete with men. Menstruation should not be deemed a "disease," according to the majority of women, who supported the choice by claiming that it should be recognized as a "natural process."

Even if this policy is implemented, most people will refuse to take these leaves until the country's organizational structure changes. They would choose to work on certain days to demonstrate their products to the rest of the world. Women and marginalized genders are constantly, threatened with being dismissed or replaced, thus they feel compelled to 'prove' their worth, which males do not. According to surveys, these period leaves, like the already existing maternity leave, will harm women's working conditions by widening the pay gap or increasing the chance of being replaced or fired because they require "too many vacations."

India has yet to put it into effect and remains mired in the same dilemma. These policies are deceiving to Indian women, who are not yet ready to accept or welcome them because they believe they would harm their working conditions. However, we must keep in mind that recognizing biological distinctions or the presence of a particular organic process does not imply that a person is "weak" or "incapable." Any organization should examine the biological distinctions that an individual may experience when designing bueprints and develop an inclusive policy based on that so that each individual can be productive in their way without being "looked down" on.