Movies And The History Of Feminism 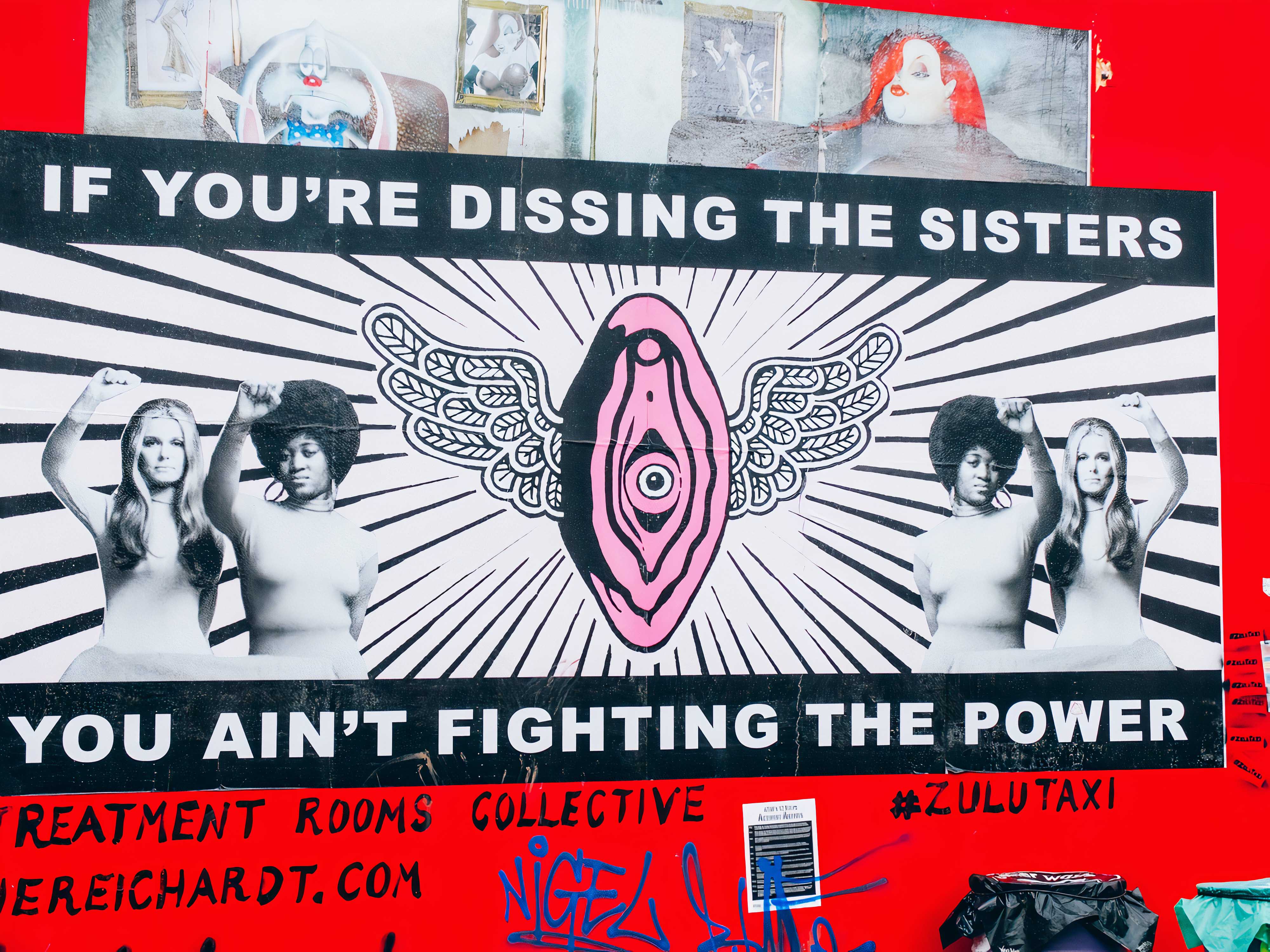 Feminism may not be too unfamiliar to most people, but the understanding most of us have stops at the level of "the feminist movement is activities with the purpose of protecting women's rights and gender equality". How it arose, developed, and evolved is something that not many people know, notice or learn about. Like other social movements, feminism has gone through different phases and is constantly changing. Yesterday's judgments may no longer be true today. However, we can get a better overview and understanding of the nature of the feminist movement through the "four waves of feminism in the West".

Western society in the early nineteenth century was not a happy place for half of the world's women. Why? If you were a female in Western society at this time, after getting married, your identity would not be recognised and protected by the law. This meant that you did not have the right to vote or own property in your personal name. In our modern times, this sounds very wrong to most people; but it is not at all surprising if you recall that, in the early 1800s, parliament and positions in government were all occupied by males, so the "unjust" law was the unjust standard.

At this time in America, the activities to fight for women's rights were associated with the abolition movement (emancipation). Most of the participants were abolitionists, especially women of colour. But gradually, the movement led by Elizabeth Cady Stanton and Susan B. Anthony was built primarily to fight for white women. In 1870, the 15th Amendment passed and allowed people of colour to vote, sparking the struggle of white women. The question arose: "shouldn't former slaves not have the right to vote in front of white women?" After that, women of African descent were not allowed to join or were required to stand behind white women in the protests. Despite the limitations of racism, the movement for equal rights for women has been promoted along with movements in other countries.

Today, most countries in the world recognise the right to vote as well as the property rights of all female citizens, and a portion of official government positions are assumed by women. These are undeniable achievements of the feminist movement in its first wave.

In general, since the beginning of World War I in 1914, the fight for women’s rights declined because of the war situation in Europe at that time. After World War I ended four years later in 1918, the new feminist movements resumed. However, it was not long before the campaign calmed down as World War II started again in 1939. Women temporarily put aside fighting for equality to get labour jobs in factories instead of men. Yet, by the end of World War II in 1945, the men returned and women had to give their jobs to them.

Women were expected to go back to the role of wives and mothers in the family to overcome the aftermath of the war. In such a context, alongside the response to anti-regime movements, anti-racism, and anti-war movements that were taking place all over the world, the second wave of feminism emerged with more thoughtful, academic efforts to achieve social and cultural equality. Not only in countries that once gave birth to feminist movements, such as the UK and the US, but also in countries on other continents such as Asia and Africa, which were places suffering from war and colonial domination at the time.

Based on the achievements of the first wave of feminism, women in the UK and the US had expanded their scope and analysed more rigorously the dependence of women on men, oppression, and injustice. Men's benefit from women arises in many aspects of social life including inequality in education, cultural and social exclusion, gender discrimination in employment, injustice in employment pay, as well as many other aspects of life such as abortion, contraception, and family. Thanks to researchers in the above fields, the second wave of feminism developed in four directions with different perspectives and ways of fighting: liberal feminism, cultural feminism, radical feminism, and socialist feminism.

What is “The Feminine Mystique”? In the past, most of a woman's life was expected to be spent in the kitchen. The most widespread dream was to have a suburban house, a husband and children, two cars - one for her husband and one for herself, and two TVs, one in the living room and one in the kitchen. That was the image of "feminine" that was associated with the “American Dream” and that most American women in the 1950s and early 1960s desired.

Yet, housewives of all levels of education panicked day and night in secret despair, looking at each other cautiously and wondering: "Is that all?" This syndrome was called the "housewife wilt”. The symptoms were expressions of emptiness and fatigue, wanting to cry for no reason and looking for something further but, sadly, it was hopeless. The psychiatrists they found were unable to find an answer to this "housewife wilt" syndrome.

Living in the same period, Betty Friedan had a similar phobia. It took her five years to investigate what she first called the "nameless problem", and later "The Feminine Mystique" was published in 1963. However, Friedan did not call for giving up her family or fighting against men. She wanted women to step into society, have a job, create freedom, and achieve the most profound education in the field that they desired.

The television series ‘Mother Of Mine’ (2019) won the “Best Screenplay" award at the 2019 Korean TV Awards. The four characters in this film are unique images representing different types of women in modern society. But there is one thing in common that audiences can feel: being a woman is not easy! The drama revolves around stories of the pressurized life of a Korean woman in modern society faces while being suppressed by the burden of living and having to face the fulfilment of duties in the family. Each female character in the movie is a unique image, representing an archetype of women in real life. The film will make audiences ponder the fate of most women in Korea specifically and in Asian countries in general.

It is possible to mention Park Sun Ja (played by Kim Hae Sook), who represents the stereotype of “a grandmother and a maid". She is a single mother who raised her three daughters by herself by running a small restaurant that sells beef bone soup. Her life is typical of a mother who puts her children first. Currently, her three daughters are all grown up but she has no time to rest. Her oldest daughter married a careless husband, and her work is busy, so every morning Park Sun Ja has to wake up early and drive to her daughter's house to take care of her grandchildren, clean the house, and even wash clothes for her son-in-law.

The pressure of women being oppressed is also revealed in the movie through the character of Kang Mi Sun (played by Yoo Sun). Mi Sun is the oldest daughter of Park Sun Ja. She is married and has a lovely daughter. Unfortunately, she meets her husband Jung Jin Soo (Lee Won Jae) who is heartless and has a childish personality. Every morning, Mi Sun has to get up early to make food and take care of her daughter while her husband sleeps until dawn.

There was no other way, Mi Sun had to ask her mother for help even though she felt deeply anxious. Just like that, every morning, the small family witnesses a rush of one thing after another. At the end of the day, when everyone is back, Mi Sun has to stay late at night and work overtime. But the most unhappy thing in Mi Sun's life is having a "bizarre" mother-in-law. Mi Sun's mother-in-law is also the "unable to help" type when considering her as a free maid who makes sure of everything in the house.

Throughout its history, cinema has made many strides and changes. The issue of "sexualising" characters also seems to be getting more attention, and it is clear that now a female character who is only to be attractive and serve as "eye candy" as a product of misogynistic writing/media is bound to be called naive and soft. That is why modern filmmakers have finally found a way to “change the outdated attitude” by introducing a "strong, independent" female character. But the problem is whether these characteristics are strong enough to counteract a product of culture and socialisation. An example of this type of female character is Black Widow Natasha Romanoff (played by Scarlett Johansson) in ‘The Avengers’ (2012).

Everyone sees Natasha as a cool character, without superpowers but still fighting monsters thanks to her superhuman spy techniques. But building a cool female character doesn't necessarily mean not "sexualising" them and getting rid of the male gaze. Claiming that creating a strong, independent, and the important female character is equal to the film crushing patriarchal ideology is farcical because the problem is often located underneath the surface and is extremely complex, not floating on the surface for audiences to see. The truth is that Natasha is still "objectified". Although in some respects the appearance of these female characters marks a step forward in gender relations, people still see that Natasha plays a secondary role.

As mentioned above, Black Widow is still an object of the male perspective, which can be seen in her outfit style. Natasha's look is not exactly a real threat to the male hierarchy and the way the camera captures her reflects this. Through the emphasis on her body parts, including her breasts and bust, viewers once again look at Natasha from the male perspective. Specifically, her superhero suit was zipped down low to turn the gaze towards her chest.

The costume design provides an erotic look to the audience and negates the outfit's inherent function to protect an important area of ​​the human body. It makes sure she does not really challenge the traditional gender roles we're used to seeing in movies. In contrast, superheroes are rarely seen as sexual objects and are often masked, with full-body armour like that of Iron Man or the Hulk as they all have alternate personalities. This has shown that despite the progress that the media has made, there is still much more to be done in order to achieve equal treatment for women in society.

The State of Girls’ Education in Pakistan

The Plight of Women in Afghanistan