Murdoch and Trump: A Deal of Two Devils? 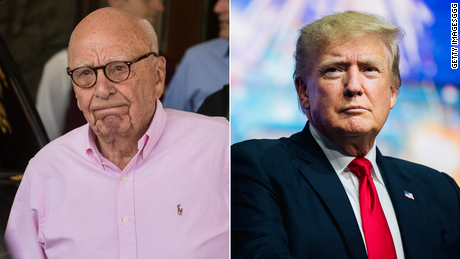 Following his 2020 election loss, Donald Trump has not sailed off into the sunset. Instead, he adamantly claims the election was 'stolen' and 'fraudulent' in an attempt to retain his political capital and die-hard supporters. Following the FBI raid on his Mar- A- Lago resort last week, Trump supporters' sense of grievance has only intensified. Conservatives flock to Fox News to hear their heroes, Tucker Carlson and Sean Hannity, lament the Biden administration, progressives, 'RINOS' and anyone else who disagrees with them.

This week, presenters claimed that the FBI had planted evidence in the search and propagated conspiratorial lies about the Justice Department. Fox News no longer operates in the same realm of reason as other major news networks. It has created a dichotomy of reality, forming an irrevocable cleavage in American politics. How can you have a debate when you cannot agree on the same set of facts? The Post-truth era is alive and cooking at Fox News.

But, for all the talk of Tucker Carlson, Laura Ingraham and Sean Hannity, one man sits at the top of this house of cards.

Rupert Murdoch needs no introduction. For decades, his media networks have dominated the Anglosphere, shaping national discourse and election results. The arch-conservative intentionally lulls his audience into a conspiratorial frenzy, smearing other news networks, centrist and left-wing politicians and commentators as the 'deep state'. By alienating his viewers from reality, his victims remain in a xenophobic right-wing echo chamber, from which there is no escape.

Following Brexit in the UK, Murdoch knew the 2016 Presidential Election would enable him to cement his position as the Republican kingmaker, eventually opting to support Donald Trump following a heated Republican Primary. Throughout his Presidency, the network backed Trump to the hilt. Fox News labelled his impeachments as 'witch hunts' and castigated liberals as anti-American.

But when you die on every hill for Donald Trump, you may one day perish at his hand, in one fell swoop or via a thousand cuts.

As results from across the country became available, Fox News made a call which did not go down well with Trump supporters. The decision desk called the state of Arizona for Joe Biden. Trump was furious. For Trump, Murdoch had violated his end of the Faustian Pact. Jared Kushner states, "The shocking projection brought our momentum to a screeching halt. It instantly changed the mood among our campaign's leaders, scrambling to understand the network's methodology." When Murdoch retorted "that it wasn't even close", for some on the MAGA train, Fox News had crossed the Rubicon back into reality.

At one point, Trump even encouraged his supporters to switch to Newsmax and One America News Network. But, unfortunately, these two networks run more like a satirical 'Twilight Zone' sketch. However, Murdoch knew that two ridiculous news networks couldn't outflank him. So, as election day ended, many network presenters began features on Dominion voting machines, smearing them as ineffective and fraudulent. Dominion hit back with a billion-dollar lawsuit. The case is unresolved and could hurt Murdoch significantly.

Before the FBI raid last week, there were signs that Fox News was beginning to distance itself from the former President. Ron DeSantis, the Governor of Florida, has been given substantially more screen time in recent weeks, and shows such as 'the Five' have talked up his chances of running for President in 2024. Now, however, DeSantis has been around the houses backing his former boss, positioning himself firmly within the Trump camp. The base is riled up.

Murdoch knows how this will end, but does not care. His deal with the devil has propelled the US to the precipice of a second American Civil War. Murdoch is locked in. He must bear responsibility for creating the most hostile epoch in American history. Time will tell if his support of authoritarian fascism knows no bounds.