Parthenon marbles at the British Museum: why are they still there? Why are they named after Elgin in the London's museum? 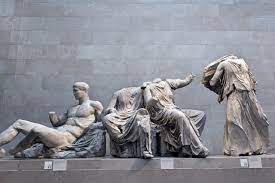 The Parthenon marbles on display at the British Museum are commonly known as Elgin. Lord Elgin was a British ambassador to the Ottoman Empire, which ruled Greece until 1830. The country gained its independence that year after the joining of many revolutionary souls from all over Europe, such as the English poet Lord Byron who died in the war and the Greeks who are now recognized as national heroes. Lord Elgin is said to have “treated” the Ottomans in order to bring to England fragments of the Parthenon which were and still are on display at the Duveen Gallery of the British Museum. Indeed, pieces of marble have been repeatedly requested by the Greek government in the past, and they are still the subject of discussion in terms of cultural plunder and the allocation of heritage. The reason why Elgin was able to remove and gift these parts of phidia’s masterpiece to England is because he is said to have been given a permit. This approval, known as “Firman”, allowed him to draw several parts of the Parthenon, as well as other buildings such as the Acropolis, the Erection, the Temple of Athena Nike, and the Propylaea. His actions in removing and relocating the industry were investigated at the time by a parliamentary selection committee that defined them as legal. The controversy over so-called looting and vandalism has been raging since Greece gained its independence, and the legitimacy of Elgin’s actions has been called into question. Indeed, the Greek government has been asking for marble fragments to be returned to their homes since 1832, and international organizations have supported the sympathy campaign, but the situation has remained stagnant. There was also an intervention by UNESCO in 2014 but the trustees of the museum easily shut it down. This is a battle for justice that has not been abandoned: if anyone pays attention, the Parthenon is now visible to the public in its original architectural settings, and the parts that should have included the lost pieces taken by Elgin are left blank. To inform the audience of their absence. In addition to giving permission to Elgin, the reasons for its righteousness are also stated in the conditions that Parthenon was in at the time of Elgin’s allotment. It is said that the Ottomans did not take proper care of the place and so the fragments could have been better kept and preserved in England. For example, the Parthenon was also targeted for destruction by the Venetians so that Elgin’s activities could be considered as an honest motive for preserving artefacts. The morality of Elgin’s activities is difficult to argue because it is clear that Greece and the Parthenon should return one of the world’s most iconic masterpieces of architecture, meaning religion, mythology, and national Greek identity. Near Greece. However, the industry should be universal and accessible to anyone anywhere so it should not be a topic of discussion. Nevertheless, it would work in situations where their displacement was done in full agreement between the two countries and not at a time when Greek culture was governed by Ottoman domination.