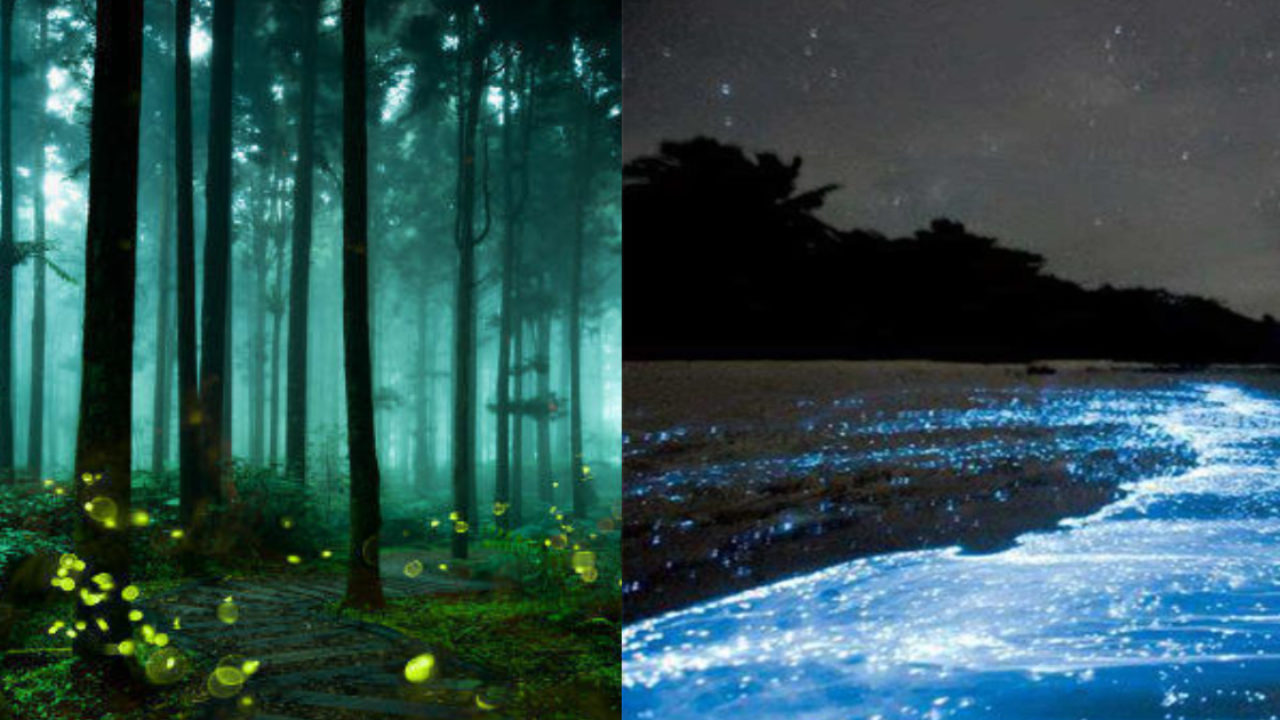 Deeply traditional with the pinch of being endlessly surprising, India is one of those destinations that ends up on every tourist’s bucket list at some point. They might dream of soaking in the beauty of the Taj Mahal in all its glory or strolling through the royal palaces and ruins scattered throughout Rajasthan. Others find themselves attracted to the soulful landscapes in Manali and Shimla or the postcard-perfect beaches in Goa. But, were you aware that there are places in India that actually glow in the dark? If you don’t, here’s a list of places straight out a fairy-tale that you should definitely pin down your bucket list.

What would you think if someone said that you could witness your favourite fantasy novel for real? A moonless night, a mesmerising forest, and thousands of fireflies make it seem like you’re outside this world, in some far off land. You can experience it in the Purushwadi Forest, Maharashtra. This tribal village of Maharashtra not only attracts tourists during summers, but also attracts millions of fireflies. The best time is the pre-monsoon period or summer, where thousands of fireflies create a prismatic sparkle of colour, you can also witness over 2000 species of fireflies. Each year, the months of May and June organise in a firefly festival in this region, during which trekkers crowd here to watch the fireflies in all their glory.

The fireflies produce bioluminescence at twilight, during their breeding season, in order to attract and seduce their mates. If you visit this place during the months of May and June, you will witness trees decorated with these fireflies, dancing in their blinking patterns as they try to seduce and call out their mates. a firefly festival, every year, is also celebrated in this region, when trekkers come to astonish their eyes and soul at the glory of the flies.

The Juhu Beach in Mumbai is one of the most famous and crowded Indian beaches. This beach is known to be the one of the most-visited beaches of India and is situated in 'Ville Parle'.It’s one of the most desired location for most film shootings. Juhu Beach the hub and homes of most celebrities and therefore, it is quite common to find famous celebrities jogging along the sands of this popular beach of Mumbai. But you already know this, what you are unaware about the Juhu beach is thatthis star-struck area has another glowing attribute. Head over to the Juhu beach at night and experience the sparkling shade of stormy blue due to a micro-organism that emits light when disturbed called Noctiluca scintillans, or “sea sparkle”. The best time is after 8 pm to experience “the glow in the dark”. You can enjoy the undefeated sea with a tasty snack and leave all your stress behind.

This remarkably new sanctuary area in Goa is located in the Northern Part of the state, near the small village of Valpoi. The sanctuary spreads across a vast area of 208 sq. km. and corroborates the protection of the enormous biodiversity found in the animal and plant life that inhabits in the Western Ghats. The development of this sanctuary makes Goa the only state in the whole of India that protects and looks upon the entire area of the Western Ghats that falls within the state. what makes the sanctuary more special is the glowing mushrooms in the forest strings of Mhadei Wildlife Sanctuary located in Swapnagandha Valley of Goa. They grow on decaying wood, fungi struck twigs, and stumps.

As the sun sets down every evening, all the metropolitan cities and towns in India get lit up by lakhs of artificial lights to cast out the darkness.

Whereas, this is an isolated part of the country that gets lights up not by any artificial intervention, but naturally. The Western Ghats of India are showered with the occupancy of bio-luminescent fungus called Mycena Genus Fungi (mushrooms) that makes the region glow, shimmer and sparkle at night.

It’s just a 60km travel from Panjim in Goa, that leads up to this amazing secret world. The fungus provides a cool and serene glow to the forest in the monsoon season comprising the months of June to October.

When scientists from India and China gave a visit to West Jaintia Hills District, Meghalaya upon hearing rumours about ‘the electric mushrooms’, they were in for a surprise. It was something they had never experienced before. The local guide requested them to turn off their torches and then the magical show happened! Theycouldn’t believe their eyes.The spectators were bewildered when they saw tiny, little mushrooms that grew on dead bamboo sticks and they somehow glowed, emitted beautiful light. In other words, they were bioluminescent. Just as in the Avatar movie, the native people use these mushrooms to steer through the forests. Upon running tests, it was established that these electric mushrooms were a new species from the genus Roridomyces. Also, these mushrooms are the first to have been discovered from the genus Roridomyces.

Have you ever experienced the Western Ghats during monsoon season? The atmosphere hangs heavy, decorated with raindrops, and the once parched landscapes erupt in a rainbow of verdant tones.The hazy-foggy weather accompanied with the fresh scent of nature is an invitation few travellers can deny. One of the places you should definitely stop by is a tribal village called Ahupe residing aside the Bhimashankar Wildlife Reserve in Maharashtra. Mother nature never ceases to amaze us. From northern lights to coral reefs, everything we experience around us is a mesmerising piece of art. A small forest in Ahupe is a natural wonder that’s sure to take your breath away. And while it might seem like just another forest showing off it’s treasuries of flora and fauna during the day, it’s really after the sunset that the magic happens as it starts to lighten up and glow! During monsoon, the forest lights and glitters up due to the presence of a bacterium called Mycena. This bacterium has a very unique quality to sparkle when they are available near a significant amount of moisture in the air.

The fungus habitats on wet twigs, rotting barks, leaves, logs and roots of the trees in this forest thus making everything glitter. This occurrence is called bioluminescence and these are actually rare, only few forests where you can experience this. The best time to pack your bags and visit the forest is during the monsoon between July to September since the humidity levels are high at that time.