Plight of Bengal's middle class echoes throughout the country 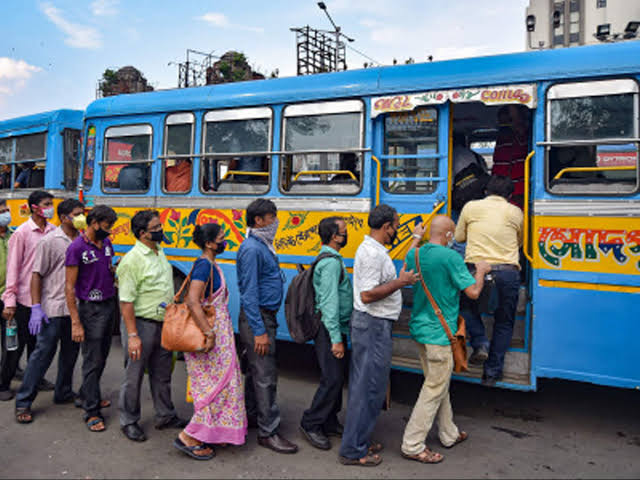 A quintessential middle-class bengali man in his early 50s is always perturbed about three things, saving every single penny, proffering top-notch education to their lads and lasses and devouring at least two flavourful meals a day which must include fish along with a sweet dish. But since the covid-induced woes tagged along in the life of every human being, these priorities have faded away and aren’t likely to come back anytime soon.

Debraj Mitra, a resident in Kolkata's middle-class neighborhood called Maniktala is one of those quinquagenarian men who worked as an accountant at a low-key private firm, had a take home salary south of fifty grand and the only earning member in a family of four. Till March of 2020, Debraj had a toilsome but mostly stable life. His 22 year old son Ishan, a final year undergrad student in chemistry aspires to do his master’s from IIT after which he thinks getting a job will be extremely facile for him. Debraj's wife, who once taught primary children at a convent school had left her job over a decade ago to focus more on their son's academics and also to take care of her ailing mother-in-law who suffers from hearing loss and cataracts to osteoarthritis and dementia.

An alumni of Jadavpur University, Debraj used to be very meticulous with his savings and expenditures. Every month he used to conserve a sizeable chunk of fortune from his salary for Ishan's higher studies as well as for the Mitra clan's time ahead. The rest went to household’s living expenses and on the debilitated seputagenerian's medical bills. But when a puzzling pathogen from China started to wreck havoc on Indian soil, Debraj's rock solid monthly calculations were literally thrown out of the window.

Distress hopped in his journey when the first phase in a series of stringent lockdowns was first introduced from 25th of March, 2020 by Prime Minister Narendra Modi, limiting the movement of 138 crore Indians as a preventive expedient to contain the escalation of coronavirus. As a corollary, blue-collar workers had to adapt to the newly introduced oddity of working from home which caught digitally and technologically untaught hired hands like Debraj off-guard. Even though Ishan ran the extra mile every day to make his father get accustomed with the new normal, Debraj's company which dealt in auto parts didn’t. His monthly income truncated to half and the need for daily prerequisites quadrupled.

The first big outlay Debraj had to incur with a reduced salary was that of a ₹25,000 laptop for his office chore's behoof followed by a ₹12,000 mobile phone for Ishan's online classes and assignments as his erstwhile Samsung J7 was in a wear and rear condition, unable to gallop through five hours of screen-on-time for his chemical indictrinations. Easy instalments acted as a messiah for Debraj but when appended with his monthly home loan repayment, a crack betided on his already turbulent wallet.

With determination and assiduity, Debraj steered his family through the year as the first covid wave had eased up by December and Bengal logging less than 100 cases a day. A forced normalcy was ushered throughout the country. But then came state elections in five states, including Bengal which saw rallies being held in a human pool with lakhs of people lined up to get a glimpse of some famed national and state level politicians who roared in a chorus of either ‘Jai Sree Ram' or ‘Khela Hobe'.

Debraj’s life was almost back to quotidian as he juggled through alternate days of working from home and office but his finances were trailing far behind. As the leader of the ruling dispensation rallied across asking for votes, the masses were forced to shell-out ₹850 LPG, over ₹170 for cooking oil followed by ₹100 for petrol and ₹93 for diesel. The financial crunch was echoed throughout the country including Debraj who had stopped saving for Ishan's tertiary level education.

When the result of Bengal elections came out, Narendra Modi's star-power had failed to win over Bengali erudites as Mamta Banerjee's Trinamool Congress (TMC) bagged more than 210 seats. By then, India was seeing one of the sharpest rise in daily covid cases as the second wave had arrived to do havoc. But there was something common between Bhartiya Janta Party (BJP) and Debraj in the month of May, both had lost something pivotal. The BJP lost Tamil Nadu, Kerala and Bengal whereas Debraj lost his job or in other words, his livelihood.

For almost two months, Debraj is sitting idle at home, frantically searching for a new job in the newspapers every morning that fits his profile. When reached out by the socialtalks, Debraj, who now spends most of his time at home honing his digital and technological skills said “Deep down I knew my gig as an accountant at the company were numbered because the de-facto of the establishment started downsizing from mid April itself. And moreover, I sit with the company's monetary numbers all day, I knew how their gains had gone down by over 70%”. Debraj who now solely sustains on his savings had to cut costs like laying-off the househelp, cooking less to save LPG and giving up on classic bengali delicacies.

“Indian politics has left me and my family in pieces. Their skewed course of action and disregard for a legitimate bail-out plan for the middle-class has left lakhs of workers like me out of job. Narendra Modi and Mamta Banerjee have unleashed hell upon us, but at least the latter has been persistent in providing us with doles in some amount. Also her party's poll manifesto which assured that students would be eligible for a ‘student credit card' scheme has already been executed in less than two months after she presided over the CM's post again for the third term. That’s the only way Ishan can afford his aspirations now” said Debraj while serving me a cup of tea.

“Nowdays, I get mousy and nervous whenever my wife asks me to fetch something from the market. Prices of common commodities have gone sky-high. Like five months ago I bought eggs for ₹4.50 a piece but now its for ₹7. Even a litre of milk came at ₹44 and now it has gone up to ₹52. Chicken comes at ₹250 per kilo and fish like ruhi and katla are touching ₹450. Till February I bought cooking oil at ₹140 but today when I went to the grocery store its MRP had gone up to ₹200 per litre. My misery has amplified after my termination. I never compromised with my family's food but now my hands are tied. Earlier we used to cook non-veg for at least five times a week and now, we hardly have it for once or twice that too for Ishan only”, Debraj vented when asked how he was coping with the family's expenses. Rates of petrol and diesel were hiked over four times this month and whenever this happens, cost of other basic items go up as well.

When asked about his political preference, Debraj said  "We bengalis are like watermelons, red from the inside (which means CPM) and green from outside (which means TMC). But when a watermelon starts to become orange, its a sign of decaying, its getting rotten. The saffron camp has done nothing for the middle class except for inflicting pain on them. LPG at ₹850, how am I going to provide for my family if I don’t have a job to pay for the necessities?. I don’t know how I’ll get a new job at such an age. I have my whole family looking up to me and all I have is just some savings which will replenish if life goes on like this".

The pandemic has pushed over 32 million middle-income families below poverty line according to a labour research done by Harvard University. Million more like Debraj are left to bite the dust with an unsettled future. Politicians in the higher-ups are busy passing the buck and blaming their counterparts forthis grandiosity but people like Debraj continue to suffer every single day.

Before wrapping up the interview Debraj said “If you dont see a ray of hope for a long time, that means you’ve lost it".