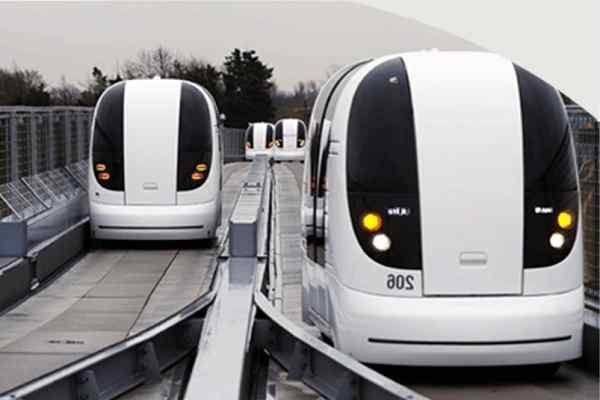 Convenient movement, better connectivity, and speed are some of the basic characteristics of a developed and modern city. The metropolitan and developing cities in India are given undivided attention for reaching new levels of modernism but the traffic system keeps lagging this development behind. National capital New Delhi sees approximately 1400 new vehicles every single day on its roads. The number of vehicles in the National Capital Region is much more than the combined count of other metro cities.

Delhi, which is already aided by a massive number of flyovers, world-class Metro rail service, BRT corridor, etc, still struggles with obstinate traffic. Due to the traffic congestion, Delhi along with the neighboring areas wastes 7 million human hours every single day.

Pod taxis are capable to seat 4-5 people at a time. These are loaded with ultra-modern technologies with navigation and touch screen input computer systems. Pod taxis run on electric cables thus, is pollution-free. Clean and hassle-free travel is the need of the hour for the Delhi NCR, given its worrisome pollution levels.

Pod taxis will run first time in India among the various sectors of Noida and Greater Noida. It will be a world-class transportation system that will be smart and unique. The route will be from Jewar airport to the new Film City being developed in the area. It will start running on tracks as soon as flights start operating from the Noida International airport (Jewar airport). The taxis will cross various Multi-National Corporations offices and commercial complexes which are yet to be developed. The presence of this kind of infrastructure is the predominant reason why the designated route is from the airport to Film city. According to YEIDA board CEO Arunvir Singh, the feasibility survey and DPR report are in the works and the presentation has already been done in one of the meetings.

Estimated Cost of the Project

A whopping amount of 300 crore rupees have been already allocated for the project. It is estimated that a total of 862 crore rupees will be required for completing this 14 km route i.e., 50-60 crore rupees per kilometer.

The pods will pass through various sectors 21, 28, 29, 32, and 33 of YEIDA. The pods will also run through Apparel Park, Toy City, Handicraft Park, and MSME Cluster for which constructions are going on full swing.

The Delhi Metro Rail Corporation (DMRC) will present a DPR (detailed project report) for the development of these pods connecting the upcoming Jewar International Airport with Greater Noida in Uttar Pradesh. Multi-model connectivity metro will also be running alongside the pod taxis to ease the traffic congestion.

Indian Port Rail and Ropeway Corporation, the company to helm the project by the government, has strategized the travel time in the pods with the Show Window facility, which would promise to increase the ridership from 5,000 people to 8,000 people per day within one month of the run.

Pods in the World

Pod taxis are already running in some of the cities across the world, such as London which starts from the Heathrow airport, Dubai, Virginia, and South Korea.

It’s time to see a rapidly developing area such as the National Capital Region get ready for this world-class transportation system. The advent of Metro rails has proven to be the lifeline of the capital. The public makes an optimum consumption of metro rails and is avidly waiting for the usage of pod taxis.