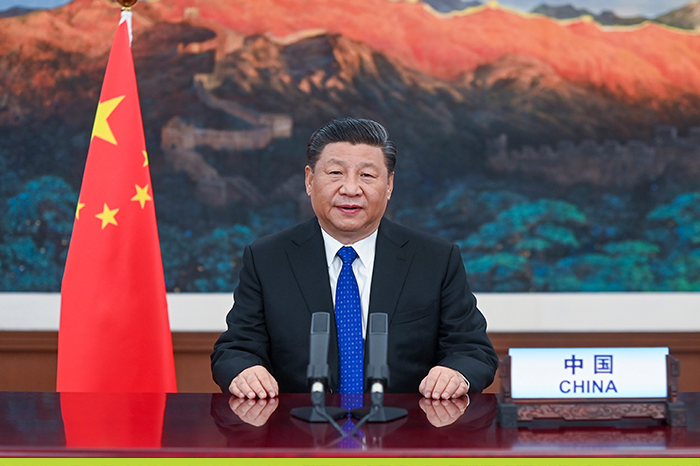 China has repeatedly criticized Western sanctions, including those against Russia, but has been careful not to assist Moscow, which could lead to sanctions on Beijing.

In a video speech at the annual Boao Forum for Asia (BFA) conference on Hainan Island in southern China, Xi warned that economic "decoupling" and pressure tactics such as disrupting supply chains could not work.

"China would like to propose a global security initiative" that upholds the "principle of the indivisibility of security," Xi said.

"We should maintain the principle of the indivisibility of security, build a balanced, efficient and sustainable security architecture, and oppose the construction of national security on the basis of insecurity in other countries," he added.

Russia urges Western governments to abide by a 1999 agreement based on the "indivisible security" principle that no country can strengthen its own security to the detriment of others.

This principle as a foundation is correct and balanced, but the context in which Russia speaks of this principle is completely out of place. Russia and China are seeing a global democracy come to fruition. This is because Russia cannot afford to attack another sovereign state. Peace has become a standard for international trade, and because the economy is the driving force behind democratic society, democracy has become influential even in the activities of autocratic countries. The economy as a reason for globalization and the embrace of human rights by as many countries as possible is indeed a cynical reasoning, but at the same time it is the one that is observable from the point of view of our evolution as human beings.

So countries like China and Russia that have territorial disputes and territorial ambitions can no longer do what they want in this world. They have joined the international market, but they have lagged behind with the changes that have taken place around them, and so far they have believed that they cannot be culturally and ideologically penetrated by Western influences. But they were wrong, because as you can see, this invasion came at a significant price, and that sets a precedent for China and other dictatorial countries. The whole event in Ukraine proves that acts of war cannot be carried out, and the rest of humanity should tolerate this.

China and Russia are getting closer and closer, and China has refused to condemn Russia's invasion of Ukraine, which Moscow calls a "special operation." China has blamed NATO crisis on NATO expansion to the east.

Xi said efforts are needed to stabilize global supply chains, but added that China's economy is resilient and its long-term trend has not changed.

China's economy is going through a turbulent period due to the impact of its aggressive efforts to stop the spread of COVID-19, especially in the Shanghai economic hub. Xi did not mention the COVID crisis in China during his speech.