Psychology of a Serial Killer 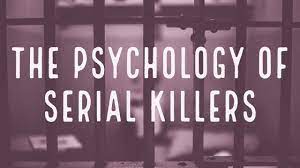 Ever since I understood what crime meant, I was most intrigued by serial killers. I would often wonder what is it that makes them commit these crimes. In recent years, there have been many serial killers and in this article, we shall discuss who a serial killer is, what makes them kill, and who are the most notorious among them. At the end of the article, you will find movies and documentaries that you can watch if you are as interested as I am!

To begin with, who is a serial killer?

A serial killer is typically a person who murders three or more people, usually in service of abnormal psychological gratification, with the murders taking place over more than a month and including a significant period between them. While most authorities set a threshold of three murders, others extend it to four or lessen it to two.

Why do they kill?

The most common reason behind serial killings is to satisfy a thirst for power, seeking attention, sexual assault, or robbery. You must have seen in movies that serial killers often kill because they enjoy it. They have a thirst for the thrill that comes from killing others. A movie on serial killers in Telugu (fiction) showcases how they may have this need to kill or harm others. They find it enthralling and commit crimes to satisfy their thirst.

All of us can be a little sadistic. For example, when you are driving on the road and see that there has been an accident and the owners of the vehicles are fighting, you may stop and watch the drama as it unfolds. It is normal to find it interesting when people are fighting something out. But when it comes to serial killers, their percentage of sadism is much higher which is not normal.

What turns them into this?

If you observe, you would find that most serial killers have gone through a rough childhood. Often, victims of verbal, physical, or sexual abuse, turns into crime. Many may also suffer from a psychological disorder that cripples their sense of knowledge and judgment turning them into predators.

For example, a person might hear voices that command him to commit these murders. Often it is difficult to not listen to these instincts. Although psychological disorders are a reason behind serial killers, there are times when authorities have found serial killers to be sane. All serial killers are antisocial. For example, we may somewhat know how to imagine ourselves in the shoes of other people. When you look at life from the other individual's perspective, you learn empathy but most serial killers lack empathy as they remain anti-social.

How can childhood impact your personality?

Let me explain with an example. A friend of mine has parents that are very protective of her. She is constantly monitored and asking them for permission to go out takes weeks of planning. As a child too, she was sheltered. Today, when most of us are independent and work by ourselves, she still depends on her parents. The overprotectiveness of her parents during her childhood has made her dependent and has caused her to fear the world. She often finds it difficult to travel alone and live by herself.

Now that we have established how important childhood experiences are, let us revisit the serial killers. Imagine having gone through abuse at such young age. I am not implying that serial killers are to be thought of as innocent because their childhood involved disturbances. But it is also important to understand the reason behind their actions and who they have turned out to be. This is so that it is possible to avoid individuals turning into serial killers. Notorious criminals such as John Wayne Gracy have gone through abuse that triggers a need in them to inflict the same amount of pain onto others.

Although difficult to believe, most serial killers are charming. They have this power to attract people towards them. One of the best examples of this is the serial killer Ted Bundy. He trapped women with his charm and made them believe that he is truly a nice person. John Wayne Gracy dressed as a clown and killed children. He too was abused as a child.

Some of the most notorious serial killers of all time include:

·         Ted Bundy- An American serial killer who kidnapped, raped, and murdered numerous young women and girls during the 1970s and possibly earlier. After more than a decade of denials, he confessed to thirty murders he committed in several states. Although he confessed to thirty crimes, his real victim count is thought to be much higher.

·         The Nithari killers- Mohinder Singh Pandher, a wealthy businessman was arrested along with his house help in connection with the discovery of the skulls of 16 missing children in the Nithari village. These men have been accused of rape, cannibalism, pedophilia, and organ trafficking.

·         Charles Sobhraj- Charles was accused of killing 12 people. He would rescue his prey from a problem that he created and then kill them and rob them to fund his lavish lifestyle.

·         K.D Kempamma - K.D Kempamma is India's first female serial killer. She killed middle class women who were facing domestic issues through cyanide and then robbed them of their belongings.

The list is never-ending. There are many more serial killers that still haven’t been caught – Jack the Ripper and the Zodiac Killer being a few of them. Although no one can ever guess what goes through the mind of a serial killer, there have been several attempts to understand them. I hope this article has conveyed to you some of the reasons behind their killings.

If you too are a psychological thriller maniac, you can add these series and documentaries to your watch list. Be warned because they will give you sleepless nights.