Raksha Bandhan: the bond of love and affection. 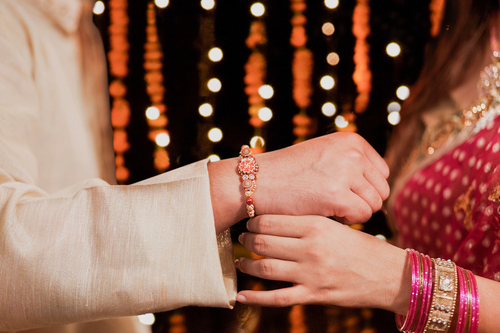 Raksha Bandhan is a festival celebrated every year on the full moon day of the Hindu month of Shravana. This year it will be celebrated on August 22.

This festival is celebrated as the bond of protection or care among brothers and sisters. On this day, sisters tie a talisman called rakhi around the wrist of their brother, as the symbol of loving and protecting them.

It was celebrated among the same families. Although nowadays it is no longer bounded to blood relations, these days’ women tie Rakhi among different caste and classes. Love, affection, and brotherhood are no longer restricted in a family. Although it is not limited to humans in modern times, people tie rakhi to their pets and trees to show love and affection towards them.

Raksha Bandhan had undergone several changes with changing times, but this festival has always maintained its essence as it celebrates a relationship of love.

In modern times, people believe that man is growing materialist and self-centred and has loosened the significance of festivals. However, this is not with Raksha Bandhan as sibling shares the unique bond they share.

In present times, sister’s expectation of her brother had changed; nowadays, women are independent and they are no longer expect their brothers to protect them, rather they want them to support them in their decision to stand by her choices and to fight for her rights.

For brothers, this festival is about assurance and promise to their sisters to support whatever they choose to do in their lives.

Nowadays, many advertisements are celebrating Raksha Bandhan. I came across an advertisement for Schmitten luxury chocolates. The advertisement is about starting a new tradition on Raksha Bandhan. In it, the sisters tie two rakhis. One is for loving her and the second is for not protecting her, for not asking her why she was talking late on her phone, or why she was spending time with her male friends, and for not spying on her even though he knows her password, nor for letting her have the confidence that she can fight for herself for confirming her she takes every decision of her life by herself and specifically to consider her equal to him.

These kinds of advertisements prove that even though people have changed the essence of celebrating Raksha Bandhan but it is for the good. Today, the thread of love and affection that the sister ties on the wrist of her brother are more about promising mutual love and respect rather than a promise of protection and dependence.

So, this can be said that even in modern times, Raksha Bandhan has shared its unique significance.

Last year, social media influencer Saloni Gaur posted a video (monologue) on Raksha Bandhan. Her video is quite a reality check for all of us. In her video, she explains how, in the 21st-century, modern women still face patriarchy in her home. She explains how girls are taught to be silent during her brother’s fault. She explains how on one hand we celebrate the festival of protection, equality, and love among siblings, and how she was taught to take her brother’s dish after he finished his meal.

I believe that although in modern times, Raksha Bandhan shares the bond of love and affection among each other on the ground, we still cannot share the same bond among each other.