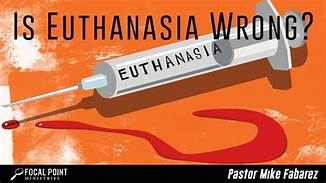 Life as we all know is a furtherance to endure the everyday affairs. Human beings are a species of demand and work every possible means to get what they call a quality of life. It is not that a person has only a right to live but a right to quality life as well. Article 21 of the Indian Constitution states that every person is entitled to Right to life with dignity and quality. Living in a state where one is practically dead is a violation to it. Right to life has always been in question whether it consisted of the right to die with dignity. Euthanasia is an act or practice of ending the life of an individual who is suffering from a terminal illness or is in a persistent vegitative state. Persistent vegitative state is a condition where a person is living with a life support system be it medications or machines.

Euthanasia is generally a mercy killing which is of two types. Active Euthanasia is the use of lethal substances or forces to cause a patient’s death. A doctor injects a lethal substance to the patient in his sleep so that he can die painlessly and peacefully while on the other hand Passive Euthanasia is withholding the continuance of medical treatment that is done for the continuance of life. When a person is in a persistent vegitative state and in case he has made his living will, that is, he wishes not to have life sustaining treatment if ever he reaches that state, life support treatment can be terminated. Could this be taken into consideration when a person is in no state to express a wish? The family members or next of kin would be able to make the decision regarding that person’s life sustaining treatment.

Suicide and Euthanasia are often misunderstood but they are two different concepts. While committing suicide, a person voluntarily kills himself due to depression or various other reasons. Euthanasia being mercy killing is an instance where a third person either actively or passively assists or abets killing a third person.

According to Section 306 of the Indian Penal Code that is, Abetment to Suicide and Section 309 of the Indian Penal Code, that is, attempt to suicide, both were criminal offences. The Constitution bench of the Supreme Court in Gian kaur v. State of Punjab, 1996(2) SCC 648 held that Right to Life under Article 21 of the Constitution of India only guarantees right to life and personal liberty and it does not include Right to die as death is the ultimate end and will end every right of a person.

There have been many global contingencies where the issue arose and the Northern Territory of Australia became the first country to legalise euthanasia by passing an act. In Netherlands, both Euthanasia and assisted suicide are permissible but only on certain criteria. It should be done on request of the patient, considering his pain and suffering, and should be provided with proper information. Active Euthanasia is illegal in USA but physician assisted suicide is permissible only in some parts of the country. Airedale NHS Trust V. Bland (1993) UK was taken into consideration where the patient, Anthony Bland was in vegetative state and the medical staff was of the view that his condition will never improve. Thus, all the Judges of the House of the Lords in Airedale’s case were of the view that the life supporting treatment should be terminated.

In India, Aruna Ramchandra Shaunbaug V. Union of India, brought a change in the perception of people towards euthanasia. Aruna Ramchandra was a staff nurse in a hospital situated in Mumbai. One night she was sexually attacked by a sweeper in the hospital. The injuries resulted in brain damage and was in a persistent vegitative state for over 36 years. One of her friends filed a petition for euthanasia on behalf oh Aruna. The court observed that in Aruna’s case the life sustaining treatment was food and hydration and if withholding was done, it would be inhumane and would not result in natural death but instead a death caused by hunger.

Even though Aruna Ramchandra was denied euthanasia, it brought many changes in the Indian law history. The Court gave a judgement that Section 306 and 309 of Indian Penal Code, criminalizes suicide and if a person attempted suicide he would be punishable with simple imprisonment for a term which may extend to one year. This was supposed to be inhumane by the Court as it was of the view that if a person tries to end his life, he might be in depression and punishing a person who is already suffering would cause more misery to his life. Thus, the Court recommended repealing Sections 306 and 309 of Indian Penal Code.

Even if the petition was dismissed it became a landmark case as it helped in decriminalizing suicide.

In a landmark judgement of Common Cause A Regd. Society V. Union of India & Anr. in 2018, the Supreme Court of India held that a person in persistent vegitative state can opt for passive euthanasia or a person can execute a living will to refuse medical treatment if he ever suffers from terminal illness.

The merits of euthanasia can sometimes be misused and there have been some instances regarding it but while looking through medical ethics, if a person who is in a vegitative state and has no chance of coming back to his life should be granted with euthanasia as held by the Supreme Court, right to die with dignity is an intrinsic facet of the right to life under Article 21 of Constitution of India.

Right to Life and Right to Die