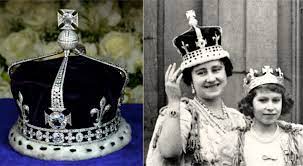 What is the fuss all about?

The Kohinoor is one of the largest cut diamonds in the world at 21.12g with 66 facets. It has what connoisseurs call zero colours which gives it exceptional clarity, less than a percent of Diamonds mined worldwide are of this type. It is currently displayed as a symbol of British national heritage at the Jewel House in the Tower of London. These reasons aside it has an aura of popularity around it for its legend of travelling and curse. Once in a while, there are always talks of bringing the prized jewel back to India or Pakistan or Iran. It was Christian by Nadir Shah as Koh-i-Noor or 'The Mountain of Light' which continues even in the royal family. The Diamond is slightly smaller than it used to be because the British royal family decided to rework it. In those days Europe preferred sparkle over sheer size so Prince Albert ordered it to be remade to an Oval cut from the initial Rose cut. It might be surprising that even the brilliant stone has had its share of criticisms not over its felicity but on its looks. After the great exhibition, satirical magazine the Punch described it as a 'Mountain of Darkness', this was before the royal jeweller Robert Garrand and Dutch experts Voorsanger and Fedder polished it to its present unblemished form.

From one hand to the other

Diamonds are the hardest substance on earth and so is our protagonist Kohinoor, in its rise from the humble dwelling in the recesses of the earth to the Crown of the English Queen. It was mined from the Rayalaseema mine near Golkonda in Andhra Pradesh, under the Kakatiya rule. The second owner of the diamond was Alauddin Khilji, Bollywood audience might recall the sequence preceding the murder of Jalaluddin Khilji by Alauddin in the movie Padmavat, where the Kohinoor is dubbed 'Nayab Tohfa'. The Diamond then constantly became an apple of discord and its position switched to the next rulers of the Delhi sultanate. When Babur defeated Ibrahim Lodhi in the battle of Panipat, he acquired the Kohinoor and frequently mentioned it in his autobiography Tuzuk-i-Baburi (which has the distinction of being the first official autobiography in the subcontinent). The next mention of the splendid diamond comes in the reign of Shahjahan, he placed the Kohinoor along with several other precious gems and gold in the Peacock Throne. It adorned the throne only for a few years as the Persian Monarch Nadir Shah invaded India in 1739, ransacking the Mughal court. Nadir Shah gave it the name Kohinoor and plucked it out of the throne to wear it like a bracelet. Post his death less than a decade later, his bodyguard Ahmed Shah Durrani took it and one of his descendants Shah Shuja Durrani battered it. He offered it as a prize for assistance in securing the throne of Afghanistan to Maharaja Ranjit Singh of Punjab. In 1849 the British conquered Punjab and in their closing treaty demanded the surrender of Kohinoor. Some other sources claim it was willfully gifted by the ruler to the Queen. Lord Dalhousie in 1851 arranged for it to be presented to the Queen by Duleep Singh in Hyde Park, London. A large crowd gathered in the park to have a glance at the nobility with an advertised value of 1 to 2 million euros at that time.

Curses are not unheard of in the case of treasures be it the Kohinoor or Tutankhamen though it is easier than the 'do not disturb' clause of the pharaohs, for our diamond. The appearance of the curse is almost synonymous with the first authentic mention of it in 1306. The Curse reads

"He who owns this diamond will own the world but will also know all its misfortunes, only God or a woman can wear it with immunity"

People in possession of the Diamond have had instances of brutal death or misfortune though there is no evidence of the Kohinoor being the culprit. Just like any other material possession of great value, it is only natural for the Kohinoor to be annexed by all means (like the elder wand in Harry Potter). Diamonds are a sitting duck for rumour mongers, the Hope Diamond also has similar curse stories in its credit. According to some sources, Ranjit Singh developed paranoia over the Diamond, he had it kept in a safe and when it was moved he deployed heavy security. The British too had it shipped clandestinely with only the captain and the officer in charge having knowledge of its existence in the ship. The British royal family paid heed to the scripture may be because of the thought that the death of several Englishmen due to cholera on the ship was not coincidental. The Kohinoor since then has been given only to females as the scripture dictated.

After independence Kohinoor was advertised as a symbol of all Indian wealth the British had looted (like the word loot itself) and soon after we were freed, a petition was made to bring it back. As imitation is the best form of flattery probably to prove their love for us, Pakistan, Bangladesh and Iran claimed it too. A few years later even South Africa tried proving it was theirs. The British Parliament is reluctant to depart from its Jewel, also the Indian Supreme Court has rejected pleas to get it back. Citing a 43-year-old law that does not allow the government to bring back antiquities taken out before independence, the Supreme Court closed the case in 2016. The Archaeological Survey of India (ASI) can try to recover an item only if it can be proved that it was illegally procured by another country (Antiquities and Art Treasure Act of 1972). Since the Kohinoor was not stolen but a gift to the British, precisely a voluntary compensation to cover the expenses of the Anglo Sikh war, it is not possible to get it back right now.

The point now is that we should view Kohinoor not as an ego bruiser but as an art to be appreciated. Its beauty should soothe our souls and provide us with a glance of our history just like any other archaeology evidence. As Keats proudly asserted, a thing of beauty is a joy forever.