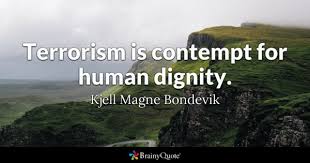 Terrorism is a peril. It is increasing by leaps and bounds. The way it is grown and spread beyond the limit is incredible. Though it has been condemned and denounced by leaders at the international forum, it spreads like wildfire and is evidence everywhere. Consequently, the world is becoming fearful, dangerous, insecure, and unsafe day by day.

Terrorism, bloodshed, violence, and killing have become the order of the day. The ruthless chain of action and reaction full of horrifying violence is too risky to ignore or take lightly. Pakistan, the Middle East, Afghanistan seems to be in the grip of many-headed and masked monster. They tried to create disturbance and shook the nation from its root so that they could achieve their political demand. National and international compelling vested interests train them.

The deadly weapons that they use and the ammunition creates havoc. It is spread worldwide and is developing a hazard in politically frustrated groups, religious fundamentalists, and misled factions in society. They indulge in narrow activities to attain their unholy and sectarian aims. In India, terrorism is not new, and in last year it has increased rapidly.

Post-independence and post-partition violence and terrorism were unprecedented. The partition based on religion, faith, and community has sown the seeds of hatred, violence, terrorism, separation, and communal divide and will continue growing and flowering for a long time. Besides socio, political and economic aspects, psychological, religious, and emotional factors are also involved in this problem of terrorism. All this creates solid feelings and extremism. Poverty, unemployment, and lack of education can even worsen the situation. Under various political, communal, and economic pressure, they succumb to the temptation and discard the democratic process.

Terrorism in JAMMU and KASHMIR is of this type. Widespread poverty, unemployment, neglect of youth, and emotional alienation are some of the reasons behind the extremism in this province. The hostile forces on our border are also helping it a lot. Smarting under this humiliation, the leaders of Pakistan spare no place to destabilize and disturb the peace of the Indian subcontinent. Series of bomb blasts in Srinagar are examples of this terror attack. 24/7 army officers are in the round of the place still they use a grenade and gun firing to brake the bunkers of  Indian origin.

Snowfall in January occurs near the areas of these borderlines. Still, there is no holiday for the army officers as they cross the border of the Srinagar in with lower temperatures of negative marking and advances with their duty to save the mother, India. To them, Mother India is like their family whom they take an oath to protect and ends up with their bloodshed in the snows frozen due to the lower temperature of Srinagar and Kashmir. Series of bomb blasts took place in the Mumbai roads of hotel TAJ and NARIMAN HOUSE  and LEOPARDS CAFÉ with CAMA HOSPITAL, where the doctors were captivated by the terrorists.

The planning was so secular that the local policeman could not understand the evidence and the disguise and thus left everybody in shock of the grenade attack that took place simultaneously in the following areas. Pakistan-sponsored terrorists had killed many civilians, including jews and monks of LEOPARDS CAFÉ and NARIMAN HOUSE. It also caused lots of damage to the economic property of the government and the country, despite loud and vociferous denouncement of terrorism in the various international forum by the Pakistan government and militant, fundamentalist, and terrorists being trained there in secret and well-established camps being run by ISI and other such groups and agencies. These extremists have found perfect sanctuaries there.

It was beyond doubt that Pakistan extremists and terrorists had their plan behind the 2001 plane crash of WORLD TRADE CENTRE. They transformed AMERICA's costliest plot and architecture into a graveyard. During the end of that year, in 2002, in the KARACHI ATTACK, the ISI extremists killed nearly thousands of people.

It is sheer madness and an exercise of futility. In terrorism, there cannot be a victor or vanquished. If terrorism becomes a way of life, the state leaders and government are not responsible alone.

Terrorism is a crime against humanity and should be dealt with using iron hands. And the force behind this exposed. IIt not only affects the quality of life, but it hardens the crime.

In the ultimate analysis, all terrorist groups are criminals. They do not distinguish between good and evil, nor do they know what is the good or bad only thing that they understand is the power of their grenade and gun that they use to shoot down the innocents. They spread the message of fanaticism, terror, violence, and hatred to spread the message of violence among the citizens. They keep the power of ammunition to conquer the world with greed and lust, which they have taught them not since childhood but since their training period. They find every place on the earth a suitable site for terror attacks. Thus to conquer the joy in the world of humanity, they do transform from human to terrorist.