The Basics and Sense of Literary Movements 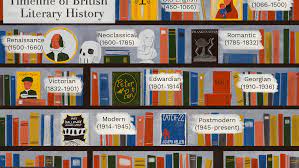 Romanticism emphasises emotion and individualism, glorifies nature, aesthetic beauty with vivid sensory descriptions. The themes are mostly revolution, love, inspiration and imagination. It focused on the subjective interpretation of common events like staring out at the sunset or wandering in a forest. It encourages readers or listeners to see the extraordinary in simple things. The main proponents of this style were John Keats, Percy Shelly, William Blake and Wordsworth. For example when Keats described the allure of a clear stream flowing from a mountain by his famous lines, "A thing of beauty is a joy forever. Its loveliness increases; it will never Pass into nothingness." It has a subgenre Dark Romanticism which along with the elements of classical Romanticism has a fascination with the irrational, the demonic and the grotesque. It is synonymous with Gothic literature with its mighty castles, secret passageways and dark settings. Edgar Allen Poe is the main representative of this genre with his poems like the Raven, "And the Raven, never flitting, still is sitting, still is sitting. On the pallid bust of Pallas just above my chamber door."

As opposed to romanticism realism has common subjects with protagonists, one can easily find around. It has a plausible plot with real dialects which is easy to follow. It has a truthful and matter of fact presentation, leaving the audience to form their views. It includes comprehensive details about daily life and can give a good idea about the time and society of their time. Its purpose is to connect the readers to the plot. For example in War and Peace by Leo Tolstoy, talks about the condition of the Russian population at the time of the Napoleonic wars. Unlike romantic novels which have just two or three main characters with all the circumstances revolving around them, War and Peace have 500 distinct characters. Its main proponents are Mark Twain, Leo Tolstoy, Henry James, Charles Dickens and Thomas Hardy. Similarly, the genre of Magical realism has a matter of fact infusion of fantastic elements into realistic fiction like Harry Potter. It aims to prove that even if magic existed, human relationships and actions would be similar.

Modernism in literature was a response to changing time and thought, individualism was preferred over society, experiments were done and ideas previously thought absurd were included. In art, it meant the entry of abstract paintings and in music the promotion of rap. It valued uniqueness and discarded the rules of classical conventions. For instance in the poem Waste Land by TS Eliot, there is no romantic setting or fixed form. It goes "Briar and fennel and chincapin,

And rue and ragweed everywhere;

The field seems sick as a soul with sin,

Or dead of old despair,

It was the time when the focus was on expressing rather than impressing. Poets wrote in free verse and novelists were not scared of writing grey characters. The main exponents of this form were Virginia Woolf, James Joyce, Samuel Beckett and DH Lawrence. The reaction to it was postmodernism when writers tried maintaining the aesthetics lost in the modernism wave by including more metaphors and paradoxes.

Nationalism began as a branch of realism but later separated as in naturalism the individual is governed by biological and social forces. It has a scientific view and is carefully detailed. The themes of naturalism are poverty, survival, cynicism and ultimate acceptance. It proves that human will is not sufficient to decide the course of action but natural factors can be strong determinants. For example, in John Steinbeck's The Grapes of Wrath, the Joad family are like animals resisting the forces of nature. Later through a series of events, they adapt to their surroundings. In the story, "A Rose for Emily" we see naturalism in full force. It has lines like, "What was left of him rotted beneath what was left of the nightshirt, had become inextricable from the bed in which he lay; and upon him and upon the pillow beside him that even coating of the patient and binding dust."

Surrealism defies logic and is inspired by dreams and the working of the subconscious mind. The literature is characterised by an expected and illogical juxtaposition with a bizarre assemblage of ordinary objects. It is recognised by the famous painting of Salvador Dali, The Persistence of Memory with the melting clocks masterpiece embodying the sensibilities that define Surrealism. This genre is most popular among young readers because of its entertaining delivery. For example, Jonathan Swift's Gulliver's Travels shows Gulliver's journey through remote parts of the world. He encounters people who are giants and miniatures, half horses and full beasts. Similarly, Alice in Wonderland shows the imagination of the child sending her through rat-sized holes and flying across aisles. Similar to this movement is impressionism where few details are used to convey the sense of Impressions left by a particular incident or scene.

Colonialism in literature glorifies the role of the colonisers or exploiters as bringing the light to uncivilised cultures. The protagonists are seen travelling to far off lands and dominating locals. This style can be labelled one of the most enduring ones in literature beginning with Shakespeare and ending in the era of Rudyard Kipling. In his novel Treasure Island, Robinson Crusoe shows the protagonist calling a native Friday just because he found him on the day. The heroes are typically adventurous British young men with a thirst to see the world and teach all its inhabitants the rules of courtesy. This literature conveniently avoids all mentions of the colonisers using the resources and manpower of the colony but shows a different picture from the ruler's perspective. The main reaction to it was postcolonialism which expresses resistance to colonialism and is written from the perspective of the colonised. It portrays indigenous practices without the lens of colonial stereotypes and shows the downsides of it. Like in The Tempest, Shakespeare through the character of Caliban shows that there is no difference in human nature throughout the world. Chinua Achebe is also a popular name in the post-colonial wave.