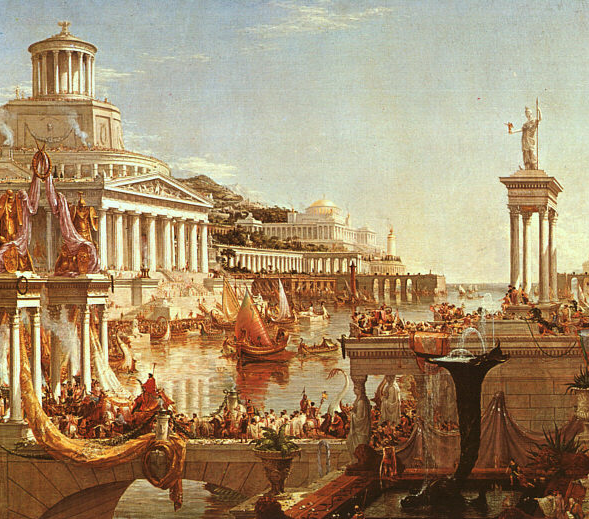 What is the cycle of history you might ask, there could be several interpretations depending on the way we grew up and how our environment shaped our viewpoints. Though there is a cycle for history wherever it occurs, and it always has a “purpose” to serve for the good of a society or at the expanse of a society. Humanity takes action especially certain individuals within a society that will weave how history will be made. Some are bound to follow others on the path of weaving history due to peer pressure. Those who give in to peer pressure or any form of pressure are bound to live a forsaken life. To further explain, whoever gave up his or her individuality, was afraid of what would happen if they were to slightly differ from society's expectations.

The person with a forsaken individuality cannot distinguish right from wrong with his or her own mind. The person with a purpose has an ability known as “creative destruction” and is bound to figure out new methods to achieve certain goals. However the term creative destruction has been mostly related to economics, it shows the bright side of what humanity can accomplish through innovation.

Though his creation won’t always benefit society, it could damage certain members living within the existing society. One major way is, that a much-improving society will leave behind laborers unless they still have a place within the new rules of society. Creative destruction exists for 2 main reasons getting rid of failing institutions or exists as a side effect of destructive purposes. In society, with a failing institution, there will be lots of people with no purpose in life in the midst of darkness will rise a man with a creative mind, and a glimpse of hope can be seen within him, and many people with no purpose will follow him.

Sooner or later the failing institutions will be destroyed, though once the man accomplishes his goal many of his followers will look to him for guidance instead of within themselves. When the man has achieved his purpose, he will either look for a new purpose or live off the riches he made during his journey. There is also a need for followers with no purpose in this world if society is going to improve.

Secondly comes destructive purpose, a person with that purpose will wreak destruction wherever he is headed. Even if that destruction means the lives of the innocent being taken at the risk of a revolution sparking within the people. Then within the ashes of destruction will rise a man with the courage to challenge the state and a purpose to challenge that evil with his own bare hands.

The courage of that one man will inspire millions to start a revolt against evil and once again after the man with courage will come out on top in this war,  during certain unfortunate events evil does win. Even though there is a misconception among members of society about evil, view evil as a force that only brings forth suffering and destruction. That viewpoint is partially correct as evil also causes good man to rise, as evil is needed for there to be good.

Destruction throughout history has brought change such as those of the American Revolutionary War, Cold War, and WW2.

Now I would like to go back to the aspect of a person weaving history. First of all, the definition of weave is to make a complex story or pattern from a number of interconnected elements. To understand how history is woven we need to understand the historical events of Japan and how modern Japan came into existence. Japan’s modern history started in 1853 when four American naval vessels were dispatched from Norfolk, Virginia, to make contact with Japan by deliberately entering Tokyo Bay.

After, that event, Japan slowly opened up to the United States for trade between each nation. The two Americans that played a vital role in weaving the Japanese Emperor from opening up the borders of Japan are Commodore Matthew Perry and President Millard Fillmore. Commodore Matthew Perry played the role of messenger in conveying the message of the American President Millard Fillmore in delivering a letter to the Japanese Emperor. Once a stable relationship between Japan and America was established, Japan began to take in the concept of a Western nation.

Thus, Japan would embark on the development of railways, modern industry, the economy, and the military. In turn, the development of Japan led to Japan being a global superpower within a few decades. In 1902, Japan got involved in a war with Russia to decide who could dominate Korea and Manchuria. Surprisingly, Japan defeated Russia and was the first non-Western country to defeat a Western Empire.

Later, in WW1 Japan joined the Entente Powers and seized German bases in China and the South Pacific. Then in 1937, Japan declared war on China to subjugate the remaining Chinese territories. Unfortunately, in WW2, Japan fell from its grace once the atomic bombs were dropped upon the country. But even after the tragic event, Japan managed to build itself back up into an even stronger global superpower than it was before.

Now that we have finally understood the basic history of modern Japan. I will connect how Commodore Matthew Perry and President Millard Fillmore weaved Japan’s history. Both of them were the main forces that pushed forth Japan into what it is today. And their actions led to all those events previously mentioned existence. The definition of weave is also to make a complex story or pattern from a number of interconnected elements. In the history of modern Japan, there were many interconnected elements that made the complex story of modern Japan. In conclusion, history is woven by the people within this world. and All the things that are leading up to the events of the present day, which are a product of complex interconnected elements from the past, and different kinds of individuals decide what history will be.