The Divine Feminine And Her Creator, Mala Pal 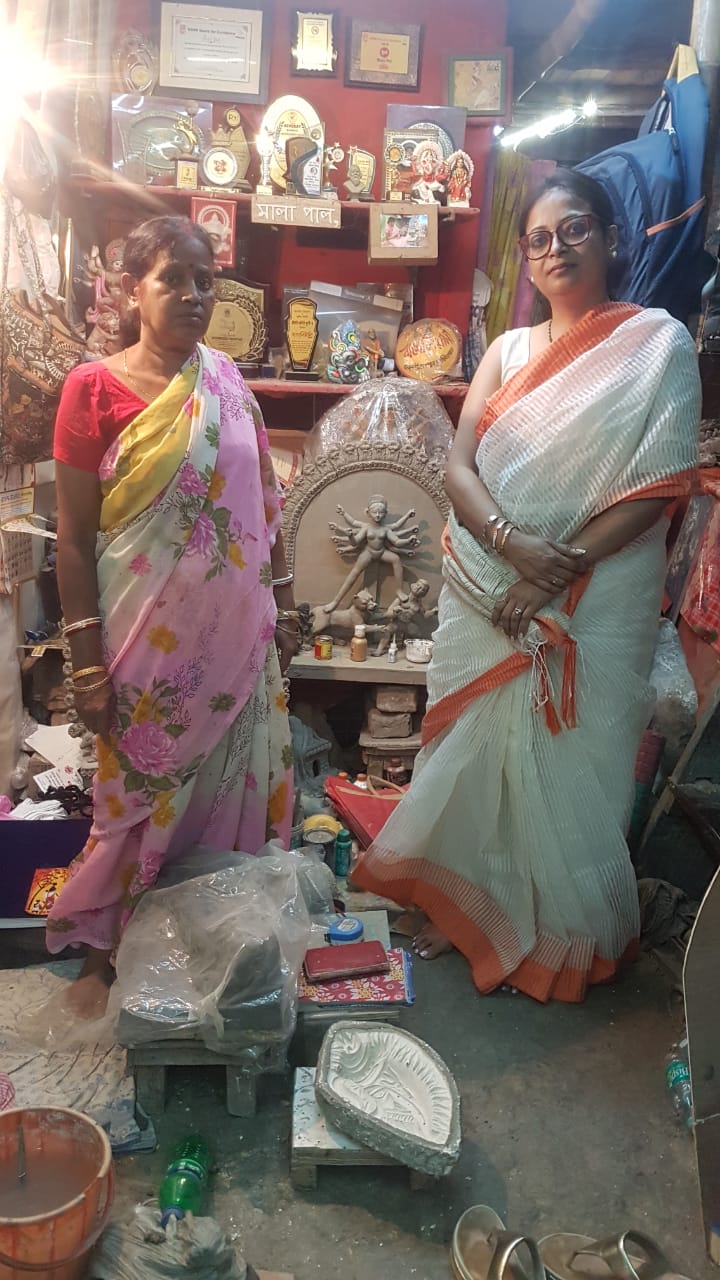 As Durga Puja, Kolkata’s festival of the year begins to creep up on the city, Kumortuli, the potter’s quarter a stone’s throw from the ghats or docks of the river Hooghly, becomes a flurry of activity. Thousands of workshops are piled together in that one neighbourhood, taking the form of shacks, warehouses, or large rooms.

Durga Puja is a ten day celebration where the city of Kolkata welcomes the goddess Durga and her four children to their ‘baper bari’ or father’s home. Kumortuli’s idols find their homes in hundreds of pandals across the city, all decorated according to various themes and being the subject of worship for millions of devotees.

We are there to acquaint ourselves with an unusual yet celebrated ‘Shilpi’ or artist of the Kumortuli community, Mala Pal. The winding lanes of Kumortuli, where idols for puja are made, remain a male-dominated world. Yet, within this zigzag of workshops, Mala Pal has made a name for herself. As we walk through the quarters, we stop every few minutes to ask where Mala Pal’s workshop is, two or three people pipe up, happy to give us directions to the celebrated artist’s place of work.

Pal’s specialty is miniature idols. Amongst the towering goddesses and asuras of Kumortuli, her idols stand out, comforting, delicate, and almost doll-like in their features.

“My family did not want me to work in this field,” she says frankly. “I trained outside of Kolkata and joined the business. Then the community had no choice but to accept me”. Mala worked incredibly hard for where she is today.

Her father forbade her from joining the field. A patriarch, he believed her job was to be a homemaker. However, after his death, Mala could hone her natural talent. Her work began to win district and, eventually, state-level prizes, and she was soon invited to work in Delhi with the National Handicrafts and Handloom Museum, popularly known as the Craft Museum.

After this, she was finally acknowledged and accepted as a Shilpi by her community. Mala proved herself as the real credit to Kumartuli. There are a few shelves at the back of her shop, all lined with various awards and all bearing her name.

Her husband brags about her achievements, urging her to bring out an album filled with photos, newspaper cut-outs, and accolades. “Most of the numbers on my phones are foreign ones,” he grins, referring to his various clients from around the world.

We happen to be one of them, seeking Mala Pal’s exquisite artistry to take our very own Maa Durga back to the UK for our Bengali community’s first Durga Puja in the town of Peterborough. Mala Pal is more than happy to oblige, “It has not been good for shilpis like us. Lockdown hit us very badly”. The outpour of clients this year has been a godsend for her and her fellow sculptors.

When reflecting on the hardships Mala has faced in reaching where she is today, she likes to joke about how creating the goddess each year has helped channel the same powerful energy into her life and work. And yet it is no joke. She has genuinely carved her place in Kumortuli’s legacy.

The sculptors of Kumortuli who lovingly make Durga, the divine feminine, remain upholders of a man’s world. When we asked Mala Pal why her daughter did not follow in her footsteps, she ruefully smiled and shook her head, “She’s doing a B.Com. She has no interest in all this. For now, I am enough”.