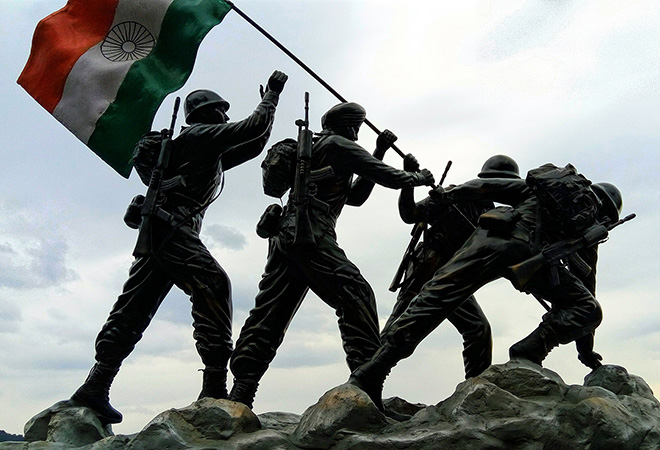 "Our flag does not fly because the wind moves it, it flies with the last breath of each soldier who died protecting it."

A nation's defence system acts as a shield, protecting it from any threats it may encounter. Every country aims to have a strong defence system in order to protect its key national interests and values against external and internal armed aggression. In a nutshell, the Armed Forces are a must-have as the ultimate weapon for national security.

India is one of the countries that has always prioritized and strived to maintain a strong defence system. India now possesses the world's fourth finest defence system, with a budget of $40.4 billion with an army size of 3.5 million, including 1.3 million active militaries. The army's manpower is supported by about 16,000 land vehicles and 1,785 aircraft, as well as nuclear weapons. It is the only developing country with such a robust defence, which is remarkable. The Indian Armed Forces are divided into three branches: the Indian Army, the Indian Navy, and the Indian Air Force. Many empires have converged on the Indian subcontinent in their pursuit of control of military power and state governance.

After the country gained independence from British colonization, the current Indian Army became officially operational. The Army's command, control, and administration are all under the leadership of the Chief of Army Staff (COAS). Six operational commands (field armies) plus a training command make up the division of the Indian Army.

The modern Indian Navy was founded in the seventeenth century when the East India Company developed a naval force, eventually leading to the formation of the Royal Indian Navy in 1934. The Chief of the Naval Staff, an Admiral, is in charge of the Indian Navy's headquarters. The Indian navy is divided into three areas, each of which is led by a flag officer.

As for the Indian Air Force, it was founded on October 8, 1932, and Air Marshal Subroto Mukherjee, one of the founding members of the Air Force, became the first Indian Chief of Air Staff on April 1, 1954. With time, the Indian Air Force undertook a huge upgrade of its aircraft and equipment, introducing over twenty new types of aircraft as part of the process.

The Indian defence system is more powerful than it has ever been, with each division gaining strength each day. Since its independence, India has pushed to strengthen its military, and it now ranks among the world's most powerful military nations.

The need for a defence system might begin with wars, but it doesn't end there. Rather than using force blatantly, it should retain a high level of influence and credibility, which will integrate military strength with diplomatic acumen, economic expansion, and international Influence.

History is proof that a strong national defence can boost a country's national strength and global influence in a variety of ways other than the kinetic use of force. A strong military budget and policies benefit a country in several ways.

A well-equipped defence enhances a country's capabilities and impact in practically every aspect of national power i.e. economy, diplomacy, alliances, and global credibility and influence. An under-resourced national defense, on the other hand, risks eroding national influence in all of these other dimensions.

A strong national defense must take precedence over development in both constitutional and conceptual reasons because a well-equipped military helps to establish an environment conducive to better development policy.

For a country like India which had to fight for its sovereignty and independence, a robust military system is essential in order to ensure the country's freedom and security. A strong defense system assures a nation that it can defend and fight for itself even if it is attacked.

It is the willpower to overcome adversity and strive for the benefit of a nation, and India is steadily working toward its objective of being a better and more developed country, using its defense system as a shield. "Quartered in snow, silent to remain. When the bugle calls, they shall rise and march again. " – Scroll of honor at Siachen