The Journey from Harlot to Heroine. 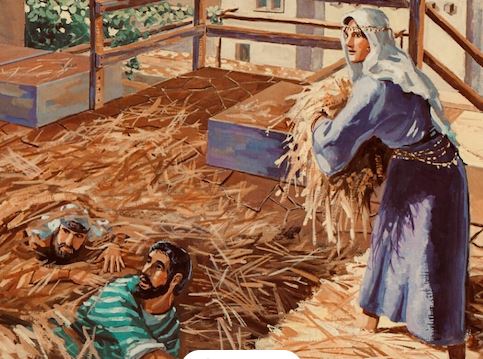 There was a great movement of Jewish people towards what God declared was their Promised Land 1000 years before Christ was born. They had miraculously escaped Egypt after 400 years as slaves. After several awful plagues, including the killing of all Egyptian firstborn sons, the Pharaoh let them depart. Pharaoh regretted his decision a few days after they left and, despite his anger, hurried after them with chariots and thousands of men.

Between the Egyptian army and the Red Sea, the Israelites were stuck. They were cornered, and death was a sure thing. Then God told Moses to wave his rod at the Red Sea, and the tremendous waves withdrew to the right and left, allowing a safe passage along the middle for the Jewish people to flee. The Egyptian forces following on their feet entered the same ocean passage as they passed across, but the waters sealed completely and the waves slammed down on them. They were all drowned.

After that, God chose not to put His people in a luxurious resort with palm trees and oases; instead, they wandered for 40 years in the desert. He led them by His presence, which hovered over them as a cloud by day and a fire by night. They ate manna and quail that God provided every day. It was now time for them to cross the Jordan River and conquer Jericho, the first city in the Promised Land that God had given them.

Joshua and Caleb sent out two spies to explore the double-walled city. The Canaanites who lived there had heard of all the battles the powerful Israelite army had won along the way and had heard they were approaching, therefore Jericho was prepared and scared. Joshua and Caleb had no idea where they would spend the night. They chose a harlot's house since she was poor and possibly a widow, and she lived close to the gate they had entered. Living within the city limits means being a human barrier against outside attackers. Rahab was the name of the harlot.

The king, who had his own spies and knew where Joshua and Caleb were staying, sent a message to Rahab, requesting her to inform him of their exact location. She deceived the king! She claimed that the spies had left the city at night and that they should be followed before they disappeared. Meanwhile, she hid them beneath some flax on the open roof of her house.

When she was ten years old, she heard about the Israelites crossing the Red Sea, and she believed in their one and only God. Good leaders can evaluate a situation, determine what is required, and act quickly. Rahab was an excellent family leader. She was trustworthy and did what she stated she would do.

It would be difficult to prove loyalty in a Canaanite community with polytheistic beliefs and sexual indiscretions. When there are so many gods and sexual partners to select from, who do you trust? Rahab, Joshua, and Caleb all switched allegiances at the same time. They all decided that if she kept their visit to the city a secret, when they conquered Jericho, and Joshua became the new king of the city, her and her family would be safe and survive.

After a few weeks, God gave the Israelite army some unexpected orders.

They first traveled 25 miles from a place called Shittim, 15 miles east of the Jordan River, to Jericho, and then another 10 miles once they were across the river. The River Jordan was in full flood at that time of year, but as the Levites, the Jewish priests, went into the river, carrying the tabernacle, the place where God's presence persisted, the waters parted, just as they had done when crossing the Red Sea.

More miracles were to come. God was showing His power and authority. Every day, the Israelite forces were commanded to walk around the walls of Jericho, with the priests in front blowing their trumpets. They were to do their walk-around seven times in one day on the seventh day, and after they finished, the priests were to blast the trumpets and all the troops were to yell very loudly. God said that if they did all this the walls of Jericho would fall at that precise moment.

That is exactly what happened; now that I think about it, why did the spies need to go to Jericho if God was going to break down the walls by Himself? Caleb and Joshua, as far as we know, did not return to their armies and people with new tactics for conquering Jericho when they departed from Rahab. So it seems the only reason they went there was to deliver Rahab and her family? Why would God want to deliver Rahab? What was so special about her?

Let me take you even further back in time to 2400 BC when Noah was born. Do you know about Noah and the flood? God did not like the way humans were turning out so He sent rain that flooded the earth. The entire human population at that time in history was obliterated, except for Noah. Noah and his family were safe on top of the water created by the flood because they were sailing on a giant ship called an Arc together with a male/female pair of every form of living species that existed before God flooded the entire earth. Noah had three sons named Ham, Seth, and Japeth. The son of  Ham was called Canaan. With this historical revelation, I believe you understand where I'm going.

Noah was the first person in the Bible to plant a vineyard and become drunk; he was the first to experience the anesthetic effects of vine juice! Ham and Canaan were disrespectful to him while he was drunk and passed out, and they may have done sexual acts on their inebriated father. Seth and Japeth were shocked and politely draped a cloth over their father. When Noah awoke, he cursed Ham through Canaan, and the Canaanite people were born, their foundations built on sexual perversion and disrespect. Returning to Rahab.

Rahab tied a scarlet ribbon over her house's window and brought her entire family inside. Only her family escaped when the walls fell and the city of Jericho was pillaged. They became honorary Israelites, and Rahab married a Jewish guy named Solon many years later. Boaz was born to them, and they raised him to be kind and gentle. He married another immigrant, Ruth, who was also accepted into the Jewish community. Ruth and her descendants eventually gave birth to King David, and almost another 1000 years later, to baby Jesus! So Jesus' veins are filled with Canaanite blood because Rahab was saved when everyone else in Jericho was killed when the walls fell down and the Israelite army entered in?

Can you imagine a Canaanite lady who was a harlot, poor, and a liar was to become Jesus' great, great, great....grandmother? This prostitute became a heroine because she had trust in herself, the spies who promised her earthly salvation, and in God. But it wasn't only her faith that saved her and her family and changed history; it was also because she put her faith into action.

More importantly, she seems to have been chosen to demonstrate a lovely aspect of God: He is redemptive and believes in restoration. 2500 years before He chose to visit the earth in human form, a portion of His chosen people (remember, everyone on the planet today is derived from Noah) went astray and out of line due to disrespect for their parents and sexual abnormalities. The Canaanites were cursed people who worshiped Baal, a god that encouraged sexual promiscuity. Rahab, herself a Canaanite before being invited into the tribe of Israel, had worked as a prostitute. God's love is shown when He chooses to redeem and bring that renegade tribe back into His fold, much like a mother hen gathering her chickens or a shepherd looking for even the one wandering sheep.

How to Get a Mindset for Success?