The Legend of Bhangarh Fort 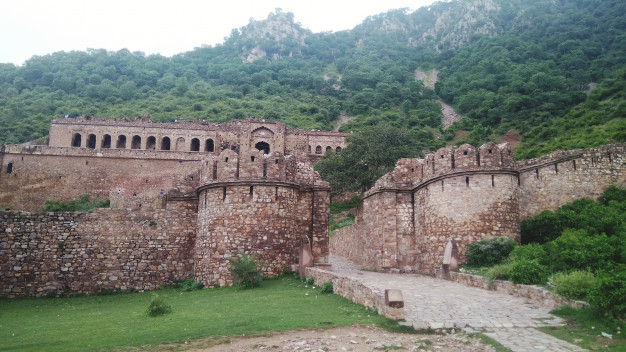 A myth or a legend? Bhangarh Fort in Rajasthan is known as India’s most haunted place. Numerous stories are attached to the fort. The Bhangarh Fort was constructed in 1573 AD (Medieval India) by Raja Bhagwant Das, ruler of Amber from the Kachwaha dynasty; the fort was built for Madho Singh, son of Bhagwant Das. Madho Singh fought in many wars beside his father, but after his demise, his son Chatr Singh took command, and his untimely death led to the decline of the kingdom. The famine of 1783 caused the town to become deserted, and it fell into ruins, giving birth to a legend that lives till today.

Bhangarh Fort situated in the Alwar district of Rajasthan between Delhi and Jaipur. With the Fort’s captivating history, it has become a tourist destination for people from all around the world, and UNESCO has given it a tag of ‘Heritage site.’ What is intriguing about this fort is that the Archaeological Survey of India has prohibited everybody from entering and staying at the fort after sunset because of the numerous paranormal activities inside the fort mentioned by the locals.

Bhangarh Fort is located in the middle of the Aravalli Ranges, and there are no villages, hotels, or any form of transportation nearby. What is left there is only ruins, excluding a magical aura felt by people who visit there.

The legend behind the fort

Princess Ratnavati of Bhangarh was the daughter of Chatr Singh, her beauty was unparalleled, and everyone loved her. Ratnavati was getting many marriage proposals from Amber. That is where fate took a turn when a magician/Tantrik called ‘Singhia,’ a man well versed with black magic, fell in love with princess Ratnavati. Although he knew he would never be able to make her fall in love with him, he tried and failed.

Singhia then came with black magic to cast a spell on her. One day, he came upon the princess’s maid, who was buying perfume from the village market, and he bewitched the scent so that Ratnavati would fall in love with him the moment she used it.

Princess Ratnavati came to know about Singhia's mischief, and she threw the perfume on a boulder, which accidentally was at the place where Singhia was standing. The rock rolled down and crushed Singhia; at the time of his death, he cursed Ratnavati and the whole village of Bhangarh.

The Kachwaha dynasty, the following year, was attacked, and Ratnavati died in the war. As Singhia said, Bhangarh would turn into ruins, and nobody would ever be able to live again in Bhangarh. It is said that Ratnavati’s soul still roams restlessly inside the fort, and her screams are trapped there. There are no villages but only forests and stories of Bhangarh.

The story of Bhangarh is not over yet

Every year, tourists visit Bhangarh to explore the fort and solve mysteries. Locals and guides have warned tourists that staying after sunset is prohibited in Bhangarh. Yet, a few people have dared to spend the night there, and there is evidence to support that those who tried to defy and challenge the fort either went missing, some never returned, and the lucky ones were not able to explain anything coherently.

The architecture of Bhangarh Fort

Although the fort is in ruins, the inside is still intact, with a Gateway for entry. The Archaeological Survey of India has found ‘Houses of Dancing Girl’ inside the fort. The stone carving and its exquisite craftsmanship are still intact after almost four decades. This proves the decade-old fort's history.

The legend lives on

Bhangarh was prosperous, and nobody knows what happened there or why nobody was able to live there. Whether it was a curse with souls trapped there or a myth? But it is a fact - Bhangarh Fort has an unusual aura with mysteries. The tale of Bhangarh Fort will live forever. One might never know what lingers in the night? Is it only a story of Ratnavati's tragedy? Or is there a presence there? There are many local stories, but all the answers lie inside the fort, and Bhangarh's history will live on forever.