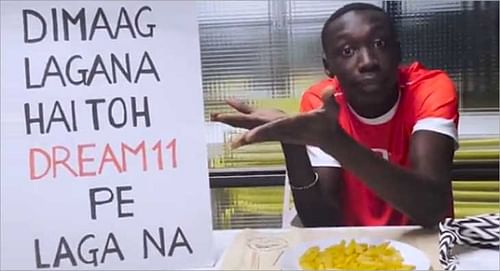 Khaby Lame, an international social media star, has teamed up with Dream11, his first cooperation with an Indian firm. Khaby is well-known for making short wordless videos about people who overcomplicate simple activities.

Influencer marketing is one of the aspects driving this dynamic shift in marketing. Dream11 has shown this by working with the global social media phenomenon Khaby Lame. The industry applauds the platform for recognising Lame's appropriateness for the marketing slogan "Dimaag Lagana hai toh Dream11 pe Laga na" and his ability to bring it to the right audience with producer Viraj Ghelani.

For the first time, Dream11 has opened up a new channel of location-agnostic marketing. Using Khaby Lame and Viraj Gehlani, both of whom have the TG for a site like Dream 11, is a solid strategy. They will also benefit tremendously from earned exposure as early adopters in the sector.

"It is a very brilliant move by Dream11," says Apaksh Gupta, CEO of One Impression. They've always been early adopters, and now they've opened up a new channel of location-independent marketing. Using Khaby Lame and Viraj Gehlani, who both have the sort of following that TG for a site like Dream 11,”

However, Tyche Media Co-founder and CEO Sasha D Cunha believe that the influencers chosen for the campaign might have been better: "I think Dream11 would have done adequate due investigation before picking both influencers," says Sasha D Cunha, co-founder and CEO of Tyche Media. Despite the concept's Khaby Lameness, I do not feel he is a suitable fit. If Dream11 is targeting the Indian market, the absence of TikTok in India means that Khaby has no fans or followers in India. I would argue that while Viraj is still in his infancy, a firm like Dream 11 might have picked better options that were more suited for their target audience.”

Despite her reservations about the influencers' choices, she commends the campaign's creativity.

The industry feels the campaign shows the size of the influencer market for recruiting foreign talent. They predict that geo-agnostic influencer advertising will become more popular if additional firms follow Dream11's lead. Influencer marketing has become a mainstream choice for corporates and brands in India since Covid hit last year. Even while influencer marketing has evolved substantially in the past, it will continue to evolve owing to the ease of campaign execution and cheap production budget requirements. We currently use location-agnostic marketing in our everyday lives, and it will continue to expand since the barrier to launching digital material is low, and it can be stretched as far as one can creatively imagine and execute a campaign from anywhere.

Marketers are now focusing on content and audience fit, which allows for creative geo-agnostic efforts like these. Instead of the traditional 'in your face' endorsements, businesses are increasingly looking for innovative ways to combine influencer content style. However, unlike the company, influencers like Khaby have always been regionally agnostic. Mobile phones and consumer devices have long had this trend. It's comforting to hear that other companies have similar views. This typically benefits a brand's horizon. This year, Khaby worked with Indian content producer Viraj Ghelani on a short video sketch urging people to accomplish daily tasks clearly and use their brains for Dream11.

In the video, Viraj Ghelani is seen chilling with his friend who eats french fries using toothpicks. Ghelani is not amused and asks Lame to clarify. Lame nibbles a fry with his fingers, extending his arms and creating distinctive facial expressions. Lame, who is dressed in a Dream11 shirt, then gestures to a banner that reads, ‘Dimaag Lagana Hai Toh Dream11 Pe Laga Na,' emphasising the brand's theme to use their intelligence while selecting a team on Dream11.

Khaby rose to prominence on Tiktok and now has over 46 million Instagram followers. He is also the world's second most followed TikToker, having over 110 million followers.

Before Dream11, he created content with sportsmen like Paulo Dybala and Alessandro Del Piero. Khaby, a big sports fan, has lately been seen sporting an Indian football team shirt in one of his videos.

Dream11 is an IPL sponsor since 2019 and has launched social media promotions with the hashtags #Dream11PeDimaagLagaNa and #TeamHaiTohMazaaHai.