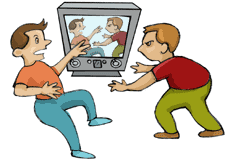 In this article we shall discuss the connection between media violence and aggression, if children are affected by it, and a short story that may help you understand the topic better. This topic is a part of social psychology.

Have you ever wondered, by watching violent movies, if people tend to become more violent and aggressive?

For some, that is true, and for some, it is not. But what is alarming is that for most, it is true. According to various studies conducted by psychologists, media violence can cause an increase in aggression.

Firstly, what is media violence?

Media violence includes all forms of mass communication that depict the threat of using force or the consequences of using force against an object, animal, or person.

Television, video games, comic books, and music are examples of mass communication channels. Data spanning more than five decades confirms that media violence leads to increased aggression. The link between media violence and aggression has been studied in over 300 studies involving over 50,000 people.

First, let us establish why psychologists believe media violence is dangerous before learning about its effects.

Around a year ago, I saw a child hitting another classmate using a pencil because he saw that on television. He thought it was okay to hit his classmate because that is what they did on television. The kid should not be blamed as he was only three years old. He only knew the action and not the consequences. We, too, sometimes, as adults, forget the consequences of our actions, and he was just a kid.

Years ago, a study was undertaken to understand if children can pick up behavior by observing elders.

Children observe the people around them behaving in various ways. Albert Bandura, while conducting the famous Bobo doll experiment, illustrated this.

Individuals that children watch are called models. These models could be anyone, whether parents, teachers, friends, or even cartoon characters that they watch on television.

Children imitate these models and take their behavior as an example. The Bobo doll experiment proved this. This experiment aimed to check if behavior can be learned by imitation.

In his experiment, bandura and his researchers observed children in a nursery aged 3-6 years and rated their aggressive scores on a four 5-point scale. It was then possible to match the children in each group so they had similar levels of aggression in their everyday behavior.

The children were divided into three groups, each having 24 children.

The first group was shown two people playing aggressively with a doll. The second group saw them playing calmly with the doll. The third group was not shown anything.

When these children were given the dolls to play with, it was observed that the group who were shown aggressive behavior, also played with the dolls aggressively.

To conclude, children do learn behaviors through observation.

Can we now say that media violence can affect children negatively?

Imagine your child watching a violent television program every day for a week. Slowly, they might start imitating those behaviors consciously or unconsciously.

For example, you see that a dog was hit with stones unnecessarily, and the dog got hurt. The next day, you are going to the supermarket and your child sees a dog. The first thing he does is take a stone, and throw it at that poor animal because he watched it on television.

Media violence has been proven to affect children negatively. At the tender ages of 3-6, children are prone to imitating behaviors, and if they watch programs that showcase violence, it might increase their levels of aggression.

Apart from affecting kids, media violence also affects adults and teenagers. In one study, people who played violent video games assigned less harsh penalties to criminals than those who played non-violent video games. People also perceive victims as less injured and showcase less sympathy towards victims after continued exposure to violence. The reason for this may be that they become desensitized to violence. Studies have shown that if people are continuously consuming violent media, they become less and less reactive to violence.

People who consumed violent media found the behavior of others hostile when it wasn’t according to them.

Similar to television programs are video games and comic books. Children learn empathy by trying to put themselves in the shoes of the victim. But in violent video games, children play from the perspective of the perpetrator, making violence seem like a regular thing to them.

Let me tell you a small snippet from my life.

Do you remember how, as kids, we watched Dora the explorer or Takeshi's castle and imitated their behavior? My niece is currently three years old. Whenever I watch a movie, she forces me to let her sit beside me. I, at the time, did not realize how the violent shows I watched would affect her. After continuous exposure to violent media, I found my niece becoming aggressive. She started throwing things at us and hitting classmates in her nursery.

After taking her to a psychologist, it was diagnosed that she consumed so much violent media that it desensitized her to violence. She became aggressive and was unconsciously adapting to those violent movies.

What I did not realize was that I too exhibited similar behavior. It helped me understand that I was also adapting to those movies and shows.

This incident is the reason I am writing this article. We need to understand that violent media affects us all negatively. Not only children, but adults too are prone to become more aggressive after consuming violent media.

In conclusion, I’d like to ask you, do you still think media violence has no adverse effects?