The October 17 Revolution... Homosexuals In The First Ranks 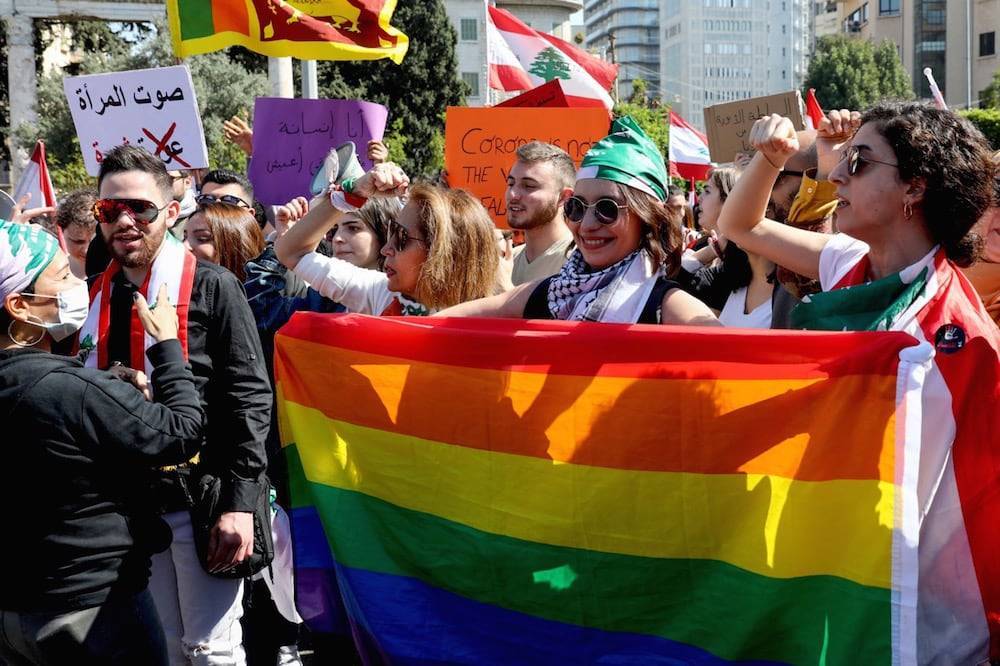 The Health Care Association (SIDC) does not have an approximate number of LGBT people in Lebanon due to the fact that not everyone has declared their gender identity or sexual orientation.

Lebanon witnessed a diverse presence of all intellectual trends and diversity, especially members of the LGBT community in the October 17 revolution. This remarkable event in 2019 heralds a better political future in the country.

“17 October revolution’’ were a series of civil protests, Marginalized groups emerged and were at the forefront of the actors in the uprising that included all regions of Lebanon from the north to the south of the country.

The advancement of LGBT+ rights was a result of people's participation in their government. Marginalized groups gained rights from the changes in the political system of Lebanon that advocates fought for.

The presence of homosexuals was not limited to the Beirut's squares where the revolution occurred, but all of Lebanon’s regions and towns. Many young men and women from the LGBT community are active after the revolution with the various groups that work on the ground. Their presence on social media continues to spread the beliefs that the revolution was founded on.

Farah Choeb was an activist during the October 17 and she is a member of the LGBT+ community said: “My presence on the street, especially in a conservative environment like the city of TYRE, was a challenge to the society that limits women’s freedom, especially with regard to roaming at night and for homosexuals who are on the sidelines of expression in Lebanon, but today we stand among everyone and our throats are raised with demands.” Choeb continues, “That is the right life that we all share and is not restricted to anyone.”

Choeb adds that they had complete freedom of expression after the revolution where they made the Beirut Square filled with songs, drawings that climbed the walls of the city and explicitly included the banners of gay rights. They also put the demands of the LGBT community in Lebanon on the map of challenge, the presence of large gatherings of the LGBT community in the street was an additional support for them.

The battle for LGBT rights included all people despite their personal differences, ideological, or gender and sexual identities. It was purely a human rights battle that affected everyone.

As for associations Like HELEM and SIDC ngos, they have an important role in working on awareness and psychological support, and they have become more and more frequent in recent times.

In an interview with the Health Care Society (SIDC), which specializes in supporting the rights of LGBT people, they emphasized on their social media accounts and their projects, that the main work lies in developing protectionist policies for them in workplaces, health and social care centers, by networking with civil society organizations, clerics, decision makers and policemen from In order to develop the skills of dealing with LGBTQ people and they are working hard on that.

However, the diversity for which the uprising was fought reflects a non-stereotypical image that Lebanon is a diverse country that broke the traditional image of some marginalized groups in their diversity, especially the residents of the neglected and remote areas of the city.

We have recently noticed a rejection of the unconscious and masculine expressions in the arenas of the revolution, which are considered in the Lebanese dictionary as “insult” and which are quickly corrected by other groups, such as responding to the word “homosexual” with the phrase “the homosexual is not insulting”, which suggests that there is a development in the vision and thought that It is necessary to stand with in front of the awareness movement experienced by the Lebanese society.