The patriarchy won’t slap itself: Thappad: A less talked about movie 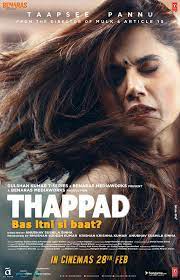 Amrita (Taapsee Pannu) is a homemaker who devotes all her time and energy to being the perfect wife and daughter-in-law. Her husband’s character is (Vikram)  played by Pavail Gulati.

Amrita is a talented classical dancer but has killed all her dreams and aspirations and her entire life revolves around his very career-oriented husband's (Vikram’s) ambitions. Vikram is the kind of man who loves cracking sexist jokes about the female gender and never leaves an opportunity to let females down. He passes judgments like how females shouldn’t be allowed to drive and gets jealous of their neighbor (Dia Mirza) who is a single mother and is way more successful than Vikram. Amrita’s life takes a turn when Vikram, because of being frustrated about a rejection from his boss, slaps her in front of numerous people in a party had Amrita conducted to celebrate her husband’s success. She feels humiliated and numb. She becomes confused about what she should do next – take this insult because “Shaadi mei to ye sab chalta hai” or stand up for herself and her dignity.

The movie is beautifully directed by Anubhav Sinha, who throws some light on an issue that is never talked about very often – domestic violence and how it shatters a woman’s emotions. Other than Amrita, the movie also focuses on four other women and their struggles of dealing with the patriarchy. One is a very talented lawyer, who is constantly reminded that her success is only the outcome of her husband’s goodwill. The second is a poor household worker who is under the conception that getting beaten up by her drunk husband every night is something very normal. The third is a very successful single mother who is constantly reminded that no matter what she does for her child, she can never fill the hollowness created by the absence of the father. The fourth is an aspiring singer, who could never run after her dreams because she was told that women can’t be ambitious once they marry someone.

Once Amrita gets the shock of her happily married life, she starts questioning everything about her marriage, how that marriage made her give up on her dreams, how she lost herself while being in that marriage and finally, decides to get a divorce. Time and again she is told by her family and friends that she’s overreacting but she refuses to listen to them. Her husband apologizes, but the damage had already been done. After many struggles, Amrita finally gets a divorce and looking at her, the other four women around her also gain the courage to take a stand for what’s right.

The character of Amrita has been played graciously by Tapsee Pannu and all the emotions were portrayed in the best way possible. A movie is an eye-opener to many of us, who think that marriage, a mere ritual, has the capability of deciding everything that happens in a woman’s life. The movie, as suggested by its name, is a slap on the patriarchal system and the societal construct that women are their husband’s property and are obliged to take anything and everything that is served to them in that marriage.

In Bollywood, where hundreds of movies are released every year, insightful movies like Thappad often get lost. Mainstream media often highlights and hypes up Masala, Action, or Controversial movies, and movies that have a deep, strong message are often unnoticed. Thappad is a movie that deserves much more attention, and if not that, at least the movie should be watched by everyone- women and men, young and old because domestic violence, misogyny, and patriarchy is an issue that is seen by all age groups. How? A little boy whose father beats up his mother, says that she belongs in the kitchen and doesn’t give her the respect she deserves experiences all these things directly and the mother who is going through all this physical and mental abuse is experiencing this combo first - handedly.