The Postives and Negative Sides of Swearing 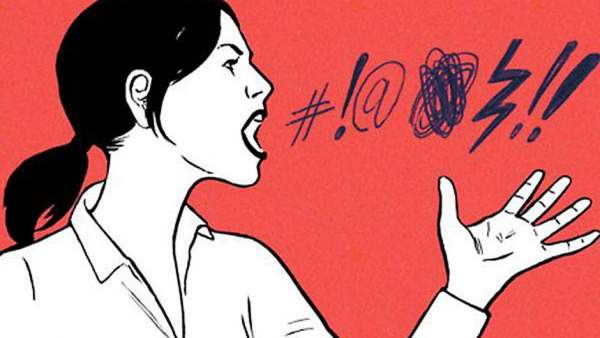 Swearing is an incredibly taboo subject. Many organizations, like the FCC, have dedicated their work to censoring curse words to "protect" people from profane content. Owing to organizations getting censored and the negative repercussions of swearing, people, only see cursing in a negative light. For example, many people swear for abusive purposes.

While there are many negatives to swearing and the power a particular word can exhibit, many studies show how swearing can be helpful. Especially in the workplace, people use cursing as a bonding method. Multiple scholarly articles, books, and discussions have analyzed the effects of swearing.

''Swearing is Good for You''-The Science of Bad Language, Emily Byrne explains that scientific research and studies help to explain the positive sides of swearing. As shown with different sensors, such as the FCC or religious groups, swearing has been turned into a personal form of language. However, Byrne shows us that profanity amongst peers can have satisfying results.

In Chapter 4, Disciplinary Offence: Swearing in the Workplace, Byrne states that swearing brings people together in some workplaces. For example, one of the academic studies uses the model of women and men in the IT industry. "Piss-taking," or jocular abuse, aids in building office morale and team bonding.

An excellent way to bond with co-workers is to partake in swearing and piss-taking (roasting each other). These types of bonding methods can assist people in building a comfort zone & increase their willingness to trust the company. Also, profanity in the workplace can create a social atmosphere and provide people with opportunities to become friends with co-workers. By the end of the 3-month observation, workers in the IT company felt like they belonged with the group, both men and women.

Steven Pinker, Professor of Psychology at Harvard University, gave a speech, The Language of Swearing; he explains that swearing could be used as a weapon to trigger a negative emotion. For example, particular swear words like Jesus Christ or Hell can cause an uproar from people in religious societies. While profanity to express the feeling of disgust is usually involved with bodily effluvia or organs, shit, piss, or asshole.

Pinker seems to answer the question "Why do people swear?" in great detail by giving many examples of different types of swearing, like abusive, emphatic, and cathartic swearing. Even though Pinker hasn't provided a definite answer to his question, he managed to show the audience why people swear. By discussing different types of swearing, he sought to communicate the meaning people attribute to these words.

Over time, people shape the meaning of words and alter their colloquial meanings to express emotions. For example, with abusive swearing, asshole and cunt are bodily effluvia. However, to express hatred, a person can change the meaning to compare someone to genitalia.

In What the F, Professor Benjamin K Bergen of Cognitive Science at the University of California, explains the power of profanity and what the world would be without it. Even though slurs are used constantly, few people know why to swear words cause an adverse reaction. In the Introduction, Bergen seems to use the most powerful words like Fuck and Shit to elicit a response from the audience. Even though the book's title has a cuss word, it is censored.

So, for Bergen to immediately start his book with a string of curse words, he states that profanity can be shocking. Bergan explains that the chapters of his books expound on the science of swearing. He wants to illustrate what happens to the brain and the emotional and social impact profanity can cause. For example, filth can cause fear. In The Paradox of Profanity, Bergen talks about the MPAA and FCC and how these organizations have the power to control indecency in entertainment. Benjamin Bergen doesn't explore the wrong, taboo side of swearing. He wants to celebrate profanity in his book and unfold the shift in this type of language.

In Swearing by Peers in the Work Setting: Expectancy Violation Valence, Perceptions of Message, and Perceptions of Speaker, written by Ithaca College professor Mr. Danette Ifert Johnson and published by the Communication Studies Journal, Johnson argues that swearing is a common form of communication, especially in the workplace. This study also follows the repercussions of swearing in the workplace and whether swearing has more impact in public or private. Swearing can give rise to a perception of someone's character. The basic definition of swearing is "the utterance of emotionally powerful, offensive words or emotionally harmful expressions that are understood as insults.".

Swearing in the workplace can often express emotions like stress or aggression, feelings that are commonplace in such settings. In the investigation at the school level, students were found highly likely to resort to profanity in a social environment, like bars, rather than in a marketplace or school.

Swear words are not seen as a part of the language as an activity. It is considered more appropriate in social settings and unacceptable informal situations. Swear words should be seen as part of the language, despite the negative connotations of words. Knowledge of this type of language is the cornerstone for regulating and evaluating the cultural impact it has.

As mentioned, there are many positives and negatives of swearing. People tend to focus more on the negative. However, depending on the place & situation, cursing can be used to bring people together instead of dividing them.