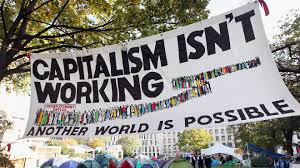 The 1990 Neo liberal reform of the Indian economy has resulted in the demand for  a fast paced growing economy where in the growth rate has remained high, India has improved in terms of greater inflows of FDI and investments but as Amartya Sen has shown via Uncertain Glory that India remains to grow in terms of its human development indices which remain abysmal when compared to many other other south asian countries. This is not to discount the important of growth. Indian state economies need to grow for the expansion of public sector which in the given context can only happen if there is a greater tax compliance because of increased in per capita income and formalisation of large sector of informal workers. There is a need for employment generation and decoupling or work and welfare that had happened via MGNREGA. For all these India needs to expand its manufacturing sector while not diluting its labour laws as has recently been done by the UP State Government.

India needs growth but this has to be sustainable and equitable. The recent EIA Notification and Labor Law Centralisation and Codification agenda do not build the same confidence in the Indian Government. There is a clear shift from seeing reason in environment protection and welfare to jingoism of growth which also has hit rock bottom and this slowing trend is not the result of COVID 19 or Macro Economic conditions but a clear wavering faith of investment security in India following the CAA protests and riots in the country. The rise of Hindu Fanaticism and Nationalism has resulted in dismantling of even the economic growth that was promised within the aegis of Achhe Din, the recent COVID 19 pandemic has shown the weakness of Indian Pharma industry, manufacturing and public health system with horrifying retellings of the quarantine centres. Clearly showing the need for a return to the politics of Roti, Kapdha Makaan. The migrant crisis that followed lockdown where the ultra rich supporting BJP government forgot to account for the basic needs and necessities of this huge chuck of the population that travelled thousands of kilometre just to be able to access ration card for barely necessary food. The Indian welfare system is on the cusp of failing where MGNREGA has already reached its capacity by utilisation of 90%of the funds and more than 7 Lakh beneficiaries have already achieved their 100 days of work. We are facing a humanitarian crisis which cannot be cleared via credit restructuring schemes which only cater to the minuscule business class of the urban sector.

Not only speaking of the post COVID 19 reforms there is also the need to evaluate the form of development that is being undertaken under the aegis of Acche Din where sustainability has taken a step back because environmental clearances are given for mining and infrastructural development very close to environment protected areas increasing in manifold the human animal conflict. Most developmental work by the government is being undertaken as behavioural change programmes and no material difference in the everyday life of the working class. While behavioural changes are necessary to tackle concerns of gender discrimination and family planning yet the programmes like Swachh Bharat and Smart Cities which recognises regions within developed cities for further urbanisation aren’t really a solution either. Dismantling the subsidy structure in Agriculture by a shift to Soil Health Cards and APMC reforms have further exposed the farmers to the market economy.

The economic reforms of 1991 further had very lopsided development where there was not an increase of cottage industry which would cater to the largely unemployed urban population but an exponential rise of service industry. This industry continues to grow while manufacturing and agricultures share of GDP continues to fall. The result of boosting manufacturing has been done via establishment of special economic zones which will further result in greater loss of opportunity and natural resources as these hubs see a rise of multinational companies setting up their service sector jobs which will cater only to the urban educated population. The education that India has so far been able to impart also needs a serious revaluation as most private institutions have skill based education programme that do not cater to global standards or the local job markets. India needs to generate employment to meet the demands of its growing demographic dividend and resources to skill them and train them. The Hindu Fanaticism stands in the way of all the necessary indices for human development. Amartya Sen has clearly shown with his Capability Approach to justice that true equality in any democracy would not be a result of equality of opportunity or egalitarianism but ensuring human development so that each individual has the capability to be able to access equality of opportunity. The Kerala Model has achieved the same but the sate has time and again questioned the sustainability of the model itself given the continued and systematic reduction of revenue for the states.

Looking at the Neo Liberal Policies following the 1991 Reforms is clearly reducing a complex issue. Neo Liberalism does not only impact the economy but revamps the state in a way to benefit the most crass liberalism that the classical liberals defended. Every few years liberalism comes under crisis growth crashes, unemployment rises and it tweaks itself and rejuvenates itself on the loss of generations that face the particular crisis.